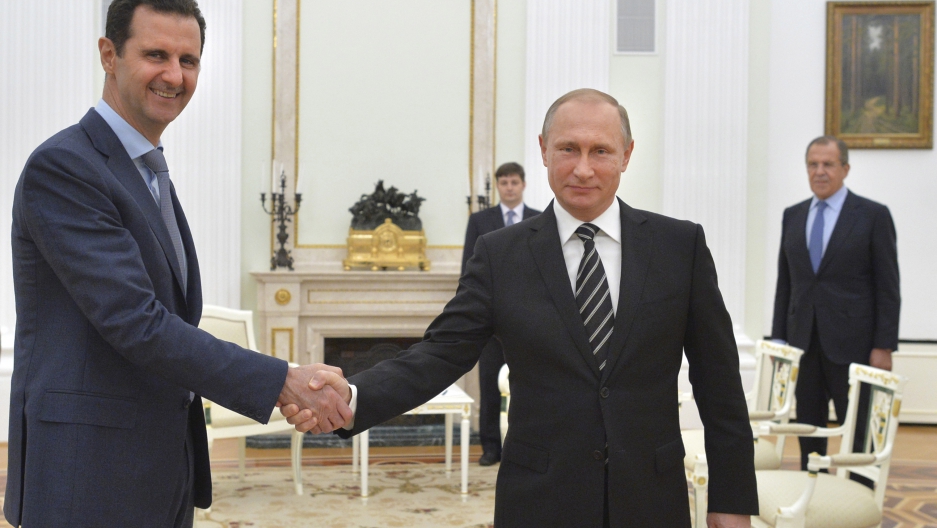 The embattled president of Syria, Bashar al-Assad, made a surprise visit to Moscow on Tuersday to meet with Vladimir Putin and other key Russian leaders. It’s Assad’s first public trip abroad since the uprising against him began back in early 2011.

Russia began intervening militarily in Syria in September, and since then, Russian warplanes have been pounding Assad’s opponents pretty hard.

“Mr Putin clearly wants to exploit the gains that he feels he’s made,” says Neil MacFarquhar, Moscow bureau chief for the New York Times. “And the Kremlin made it clear in their announcement that he was the one who called the meeting and asked Mr Assad to come to Moscow, which obviously since Russia is his savior at the moment, he could hardly refuse.”

The Kremlin says they discussed not only the military situation, but also the need for a political settlement.

According to remarks released by the Kremlin, Putin told Assad that  “on the question of a settlement in Syria, our position is that positive results in military operations will lay the basis for then working out a long-term settlement, based on a political process that involves all political forces, ethnic and religious groups… Ultimately, it is the Syrian people alone who must have the deciding voice here.”

“We all know that any military action must be followed by political steps,” Assad was quoted as responding. “Of course, the whole nation wants to participate in deciding the destiny of their state, not only the ruling party.”

“On the face of it,” says MacFarquhar, “it looks like there’s an agreement. But I think that no-one quite knows how flexible Mr Assad is on that point, and I think that Mr Putin probably wanted to meet him, just to sound him out, to find out what he meant by participation in a political transition.”

MacFarquhar says it’s hard to get an accurate read on Russian intentions and goals. It appears they want to avoid the chaos that followed the ousting of Gaddafi in Libya in 2011 and Saddam Hussein in Iraq in 2003. “I think that’s Russia’s main goal,” said MacFarquhar. “Now they keep saying they’re not married to Mr Assad in that process, but they haven’t really spelled out what they see as the steps in a political transition, other than to emphasise it should be a Syrian-led process.

"There's a sense of relief that the cavalry coming from Moscow is going to be much closer to the Syrian elite's way of life than the Iranians who had been rescuing them until now," Cambanis says.

For evidence of the comradery, consider the affectionate nickname Assad supporters have given Putin — "Abu Ali."

"It's a way of saying this guy is one of us, he's going to be the godfather of our victory, and he's a little bit of an old-fashioned strongman." Cambanis says. "It's sort of silly, propagandistic sycophancy. On the other hand, it reflects this thirst for an outside savior."

Not everyone in Damascus supports how Syria's regime is fighting the war. Cambanis met a pro-rebel wife married to a government supporter.

"There's a lot of pain and a lot anguish in their disagreement.  I wrote about a scene over dinner where we could hear barrel bombs exploding in a nearby area of the capital.  And the wife burst out crying. She was so moved and aggrieved by the bombing, by the sound of what was possibly dozens of innocent people dying," he says.  "Her husband very calmly rebuked her, and he said 'Those aren't people, those are just fighters.'"

The couple has agreed to stay together. But Cambanis says the duo limit the amount of time they spend discussing a conflict that shows no sign of winding down.