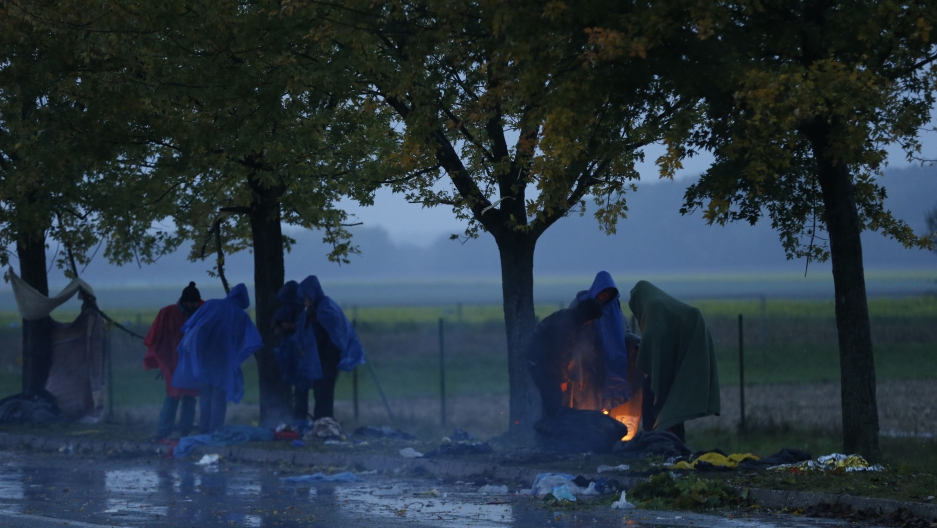 Migrants warm themselves next to a fire as they wait to cross the border from Croatia into Slovenia.

She’s one of thousands of migrants and refugees stuck at border crossing bottlenecks in southeast Europe. Many people, including families with young children, are spending nights in the cold and rain.

One woman from Syria who spent the night on the border between Croatia and Slovenia complained they were not being treated like human beings: “We have children — babies — they are freezing here,” she said. “Nobody cares. No government cares. They are just laughing at us, saying ‘no, we can't, we're awaiting orders.’ Which orders? We are human here, not animals!”

"It's an onslaught of people,” said Ramiz Momeni. Momeni is the director of a London based charity Humanitas, and is one of two doctors working with people waiting at the border post at Berkasovo in Serbia. “They just come and come. ... We don't have a chance to treat [them]. We don't have the actual medicine to be giving out. We don't have any more rain coats. As you can see people — you know, children, 10 days old — hypothermia — we don't have a blanket to give them. We need action.”

“As you can see,” added Asqarova, “this is seriously a humanitarian situation. You can see if you go to the crowd, you will see women with children, with disabled people, they are all trapped and the border at the moment remains closed from Croatian side.”

Hungary has closed its frontier entirely. Slovenia has said it can only admit and process 2,500 people per day from neighboring Serbia. But Serbia says the migrants are arriving from neighboring Macedonia at the rate of 5,000 per day.

“There seems to be a kind of limit, obviously, to how many people one can actually register and process,” says the BBC’s Nick Thorpe, in Slovenia. “Each country tries to register everyone at the beginning. But then, as the numbers continue to increase, then they give up registering, and just transport them as quickly as possible to the next border.”

The onset of autumn cold and rainy weather has not deterred migrants from starting on their journeys. “There’s no sign of those numbers falling,” says Thorpe. “If we look further south to the Greek islands, there’s still thousands of people arriving there. The numbers haven’t been falling there at all.”