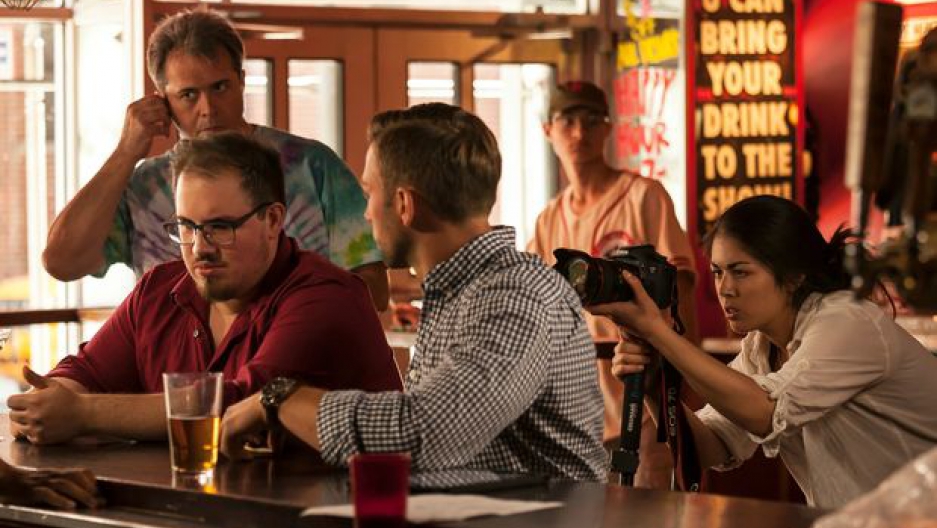 Joseph Riedel and his team on the set of his web series, Team Tumor

At the end of last year, we gathered creative resolutions for 2015. We've followed four different creators, including a reggae DJ in Ohio, a calligrapher in Washington State, a diorama artist in Oakland and an aspiring director and screenwriter in New York.

Joseph Riedel had long dreamed of working in television. Those dreams were interrupted, however, when he was diagnosed with a brain tumor just before his 25th birthday. Not to be deterred, he decided to turn his experience into a comedy web series.

“I don't want to say laughter is the best medicine because that's cheesy, but it has become my defense mechanism through life — making jokes out of things I probably shouldn't be joking about,” says Riedel.

After recovering from a successful surgery, Riedel has written a screenplay, hired a crew and started filming the first episode of a series he’s calling “A Good Sense of Tumor.”

“As a creative, I have discovered that you can have a lot to say and stand on your soapbox yelling and no one pays attention. And by a very unfortunate event, I have somehow stumbled across a story people are very interested in hearing. That is the story of taking a very bad diagnosis of a brain tumor, and turning it into a comedy series,” Riedel says. “So I kept writing. I've got a crew together — friends who I've worked with before. And then some new people who are quickly becoming very trusted friends and very valued co-workers.”

Those close to Riedel say working on the series has been good for him.

“You know when you go through something like this it's so traumatic, and you're just so in the moment. I saw the old Joe coming back more once he started putting his words into this format of the comedy series. I could see that he could laugh again and he could, you know, step back,” says Catherine Riedel, Riedel's mother. “I'm sure there's still anger there, but the anger wasn't the way he moved through his world anymore.”

Riedel himself recognizes the good things that have come about from working on the project.

“I feel like I haven't accomplished anything this year that's super extraordinary. If anything, what I've done is for me a very ordinary thing, which is take a really bad situation and try to deflect with humor. You know, as far as diagnoses go, I had a brain tumor. It's not the worst brain tumor out there. I know there are a lot of people going through a lot worse things. I'll feel a real sense of accomplishment when one of them sees the series and tells me it's done something for them,” Riedel says.