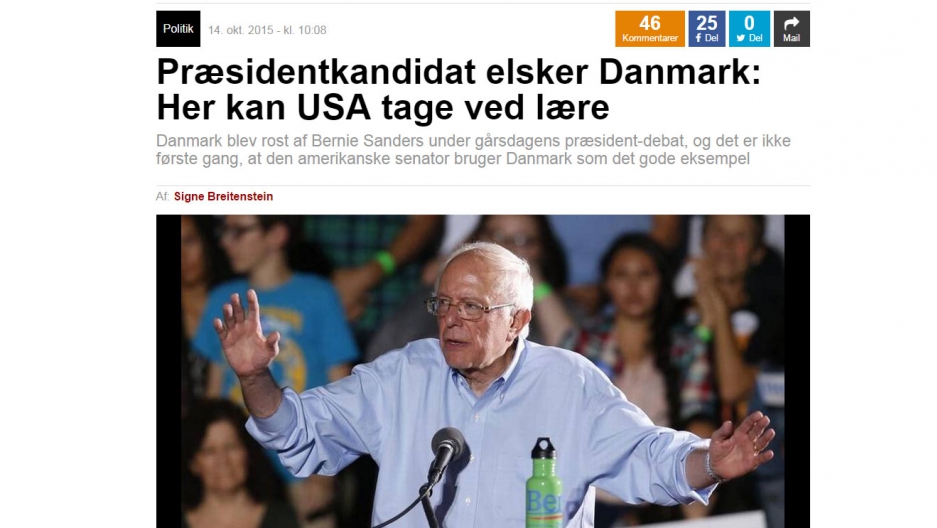 Politiken: "Presidential candidate loves Denmark: In the US, Denmark was praised by Bernie Sanders during [Tuesday]'s presidential debate, and it is not the first time that US Senator has cited Denmark as a good example"

One of the stars of Tuesday night's debate was not a candidate but a small country of just under 6 million people: Denmark. Famously named the happiest country on the globe in a 2013 World Happiness Report, Denmark was invoked by Vermont's Senator Bernie Sanders as an exemplar of his Democratic Socialist platform.

Sanders suggested the United States look to countries like Denmark to "learn what they have accomplished for their working people." Clinton was kind but firm as she brought Sanders back to the Las Vegas backdrop to Tuesday's debate. "We are not Denmark," she said. "I love Denmark, but we are the United States of America.''

For some Danes, like Ulrik Haagerup of Danish Broadcasting, hearing his country's name uttered at such a venue was both exciting and predictable. "Being citizens in a little country, we are always very flattered when big countries, even presidential candidates in the United States, mention our name," he says. But Haagerup thinks Americans' characterization of Denmark is exaggerated. "Depending on your political view in the United States, it has always been so that either you think that our system is some sort of Communistic system or you think it's paradise. And for us, living in it, it's neither."

Haagerup says most Danes accept high taxes because they get so much in return. But it's more than that. He says Denmark's social safety net goes to the core of what it means to be Danish. A 19th century poem describes Denmark as a country where "few have too much and fewer too little."  And it shows in Denmark's wealth gap, the second smallest among the world's 34 most developed economies. But these days, there is lively debate about the social welfare system. "There's a growing notion that government can't take care of everything."

Learn more about refugees in Denmark

Refugees take over Danish daily newspaper for a day

And then there's the decidedly ungroovy attitude of the Danish government toward migrants and refugees. The country's immigration ministry published ads in Lebanese media discouraging migrants and refugees from coming to Denmark. The government imposed new language requirements on new refugees and reduced the amount of benefits they'd receive by half.

"There's a very heated debate over migrants and refugees," says Haagerup. "On one hand, most people would like to help people who are really in need, who will get killed if they return to their home country. On the other hand, there's a growing understanding that it has consequences if we open our borders. So the debate is whether we should open our borders or close them and most people feel that we have to compromise between the two."

Haagerup has lived and worked in the United States and he's a big fan. But would he ever switch places and live there permanently?

"There are so many things in the United States that I do love but to be honest, I don't want my children to grow up to become American because I like the security of our system," he says. "I like the way that most people here interact with each other. But on the other hand, I can miss the dynamics of American society. That in the United States, you can really make it if you are lucky and have the talent for it and work for it."

And here's the nagging worry from a Dane with cradle-to-grave security: "The discussion here is if the welfare benefits are too high, there might be a tendency that people get too lazy."