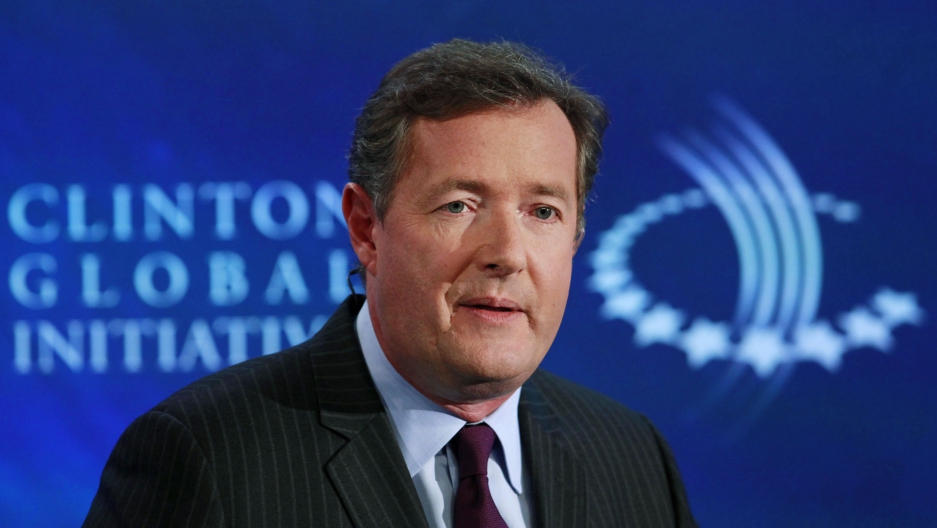 The massacre at Umpqua Community College in Roseburg, Oregon last week was the 294th mass shooting to take place in America in 2015, according to shootingtracker.com.

Gun control advocates are optimistic that, with new messaging, change can be accomplished at the state and local level. Many are looking to the recent debates on gay marriage and the Confederate flag as inspiration for how to change the conversation surrounding gun control.

Piers Morgan, the US editor-at-large for DailyMail.com and the former host of "Piers Morgan Tonight" on CNN, has openly advocated for stronger gun control laws.

In the process, he's become an enemy of right-wing conservatives. Websites like The Daily Caller and Brietbart.com have posted videos of his segments, mocking him as an elite Brit telling Americans how they should live.

Morgan is now back in the United Kingdom, but he's still thinking about American gun violence.

“America is a violent place, but Britain has historically been a very violent place, as has Germany, as has Japan, as has Australia,” Morgan says. “The common denominator of all those countries is that, through the evolutionary process of their societies, all of those countries have, in the end, renounced guns in the belief that guns actually make a society more violent.”

Morgan does acknowledged that becoming a less violent society is not simply a matter of flipping a light switch, especially when there are more than 300 million guns are already in circulation in the United States.

“I speak as someone who loves America and loves Americans,” he says. “But having been brought up in a country where there are no guns, the one thing that you’re completely struck by when you come to America is the amount of paranoia and fear that infests daily life in almost every sphere of American society because of the presence of guns.”

Morgan argues that fear and paranoia have not only made Americans numb to gun violence and massacres, but that such fear has crippled people from taking action to strengthen existing gun controls, or introduce new legislation.

“When Australia had 35 people killed in a massacre in Hobart in 1996, they changed all their gun laws irrevocably, and they have not had a mass shooting for 20 years,” he says. “There is an example here to be looked at, and I simply urge Americans to look at it and say, ‘Is there something we can do, given the large volume of guns already on the streets of America, to try and reduce gun violence?’”

“To me, doing nothing is unconscionable,” he adds.

So what solutions exist, or could potentially exist? Morgan says that America first needs to identify individuals who are at risk of committing mass shootings.

“They tend to be twisted loners in their late teens or early 20s, perhaps on medication, perhaps with mental health issues, perhaps playing violent video games and watching violent movies,” he says. “But all of those things are also prevalent in societies like Britain and Germany and so on. The same issues are prevalent in all those countries, but the one thing that we don’t have is a system in our society that allows these people who are so dysfunctional, who are so mentally ill, to get such ready and easy access to guns.”

“But for some reason, because it is framed in the 2nd Amendment and the Bill of Rights ... it is decided that a gun, which has one purpose — and that’s to shoot things — should not be regulated the same way as a car, which has a primary purpose of getting people from point A to point B,” he says.

But there is more to change than regulation. Many Americans hold a “good guy with a gun” mentality — the idea that owning a firearm can potentially stop another person with a gun looking to do harm — a philosophy that Morgan finds damaging.

“If you’re happy to live in a country that espouses such a philosophy, well, then I feel sorry for you,” he says. “Certainly no advanced country like America, which is a great superpower and has done so many great things in its society and the way it goes about its business, nobody living in America would surely want to have a society which prides itself on being the most violent and making heroes out of mass shootings.”

Will America ever put its foot down and stop the violence in her streets? Morgan holds out hope that “reasonable” people can prevail.

“There have been 142 school shootings since Sandy Hook,” he says. “If any American wants to ring in [to The Takeaway] and with a good conscious say that this is something that should not be looked at and somehow arrested, then I would really question their souls.”