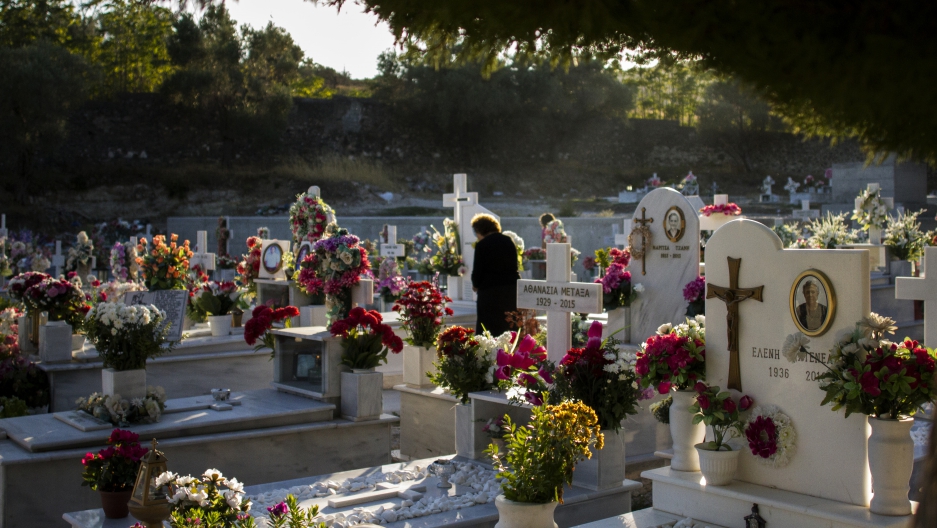 A graveyard on the Greek island of Lesbos, where refugees are buried. Many are buried in unmarked graves in a different section.

In the back of an old cemetery on the edge of Mitilini, rows of new, modest plots are multiplying. The simple dirt mounds stand in sharp contrast to the imposing, marble tombs dotting the bulk of Saint Panteleimon's beautifully manicured grounds. These are the graves of refugees and migrants who have died trying to reach this small Greek Island.

“Here [are] the Syrians,” says Salina Kyriako, a groundskeeper here in her 40s with tough calloused hands and suntanned arms. Walking to the cemetery’s edge, she searches for one in particular, “one of them is a woman and child together.”

As increasing numbers of refugees and migrants attempt the dangerous journey from Turkey to Greece by sea, the number of deaths along the route is mounting as well. The UN estimates that of the more than 500,000 people who have crossed the Mediterranean in 2015, nearly 3,000 have died or gone missing. In some exceptional cases, the deceased are repatriated to their home country or to the country the family is hoping to reach, but most are given municipal funerals.

This cemetery on Lesbos is the exception.

While most of the dead are from the past two years, groundskeepers at the cemetery say the first refugee was buried here decades ago, long before the recent surge of people trying to reach Europe. Lesbos has had a long history of migration by sea, many of the residents were themselves refugees who fled what is now Turkey in the 1920s.

One row is entirely comprised of people who died this September, each marble headstone marked with “unknown” in Greek; bodies the coast guard was able to recover but not identify. The crossing from Turkey is becoming more dangerous partly because the weather is beginning to change and because Turkish smugglers are packing boats with more people. In addition to the recent deaths, dozens more remain unaccounted for.

One row of graves is entirely made up of people who died in September of this year, each small headstone marked with “unknown” in Greek.

A local charity in Lesbos has begun to hold funerals for migrants and refugees who die off the island’s coast. Volunteers bring flowers and pay their respects, but they don’t light candles or burn incense, concerned the Christian rituals would offend the most likely Muslim deceased.

Salina says she admires the dignity the charity brings individuals, but still the deaths feel senseless.

“Who cares about the flowers, who cares? They lost their life, for nothing. If you go in a small boat like this its [such a] big risk,” she said sounding tired and overwhelmed. But she acknowledged that the risk was a desperate attempt to lead a better life, “they say its better if we die than to live there, this is the problem"

Selina says she doesn’t believe it’s possible to stop people from coming, so instead the government should find a way to bring families to Greece safely. As the situation is now, she says she expects more graves will be dug on the far edge of Ayos Panteleimon.

“Ah you see, today is windy, we’re expecting bad news,” she said looking out over the port city below to the Turkish coast just visible on the horizon.

Later that day, the coast guard reported seven more missing off the nearby Island of Kos.