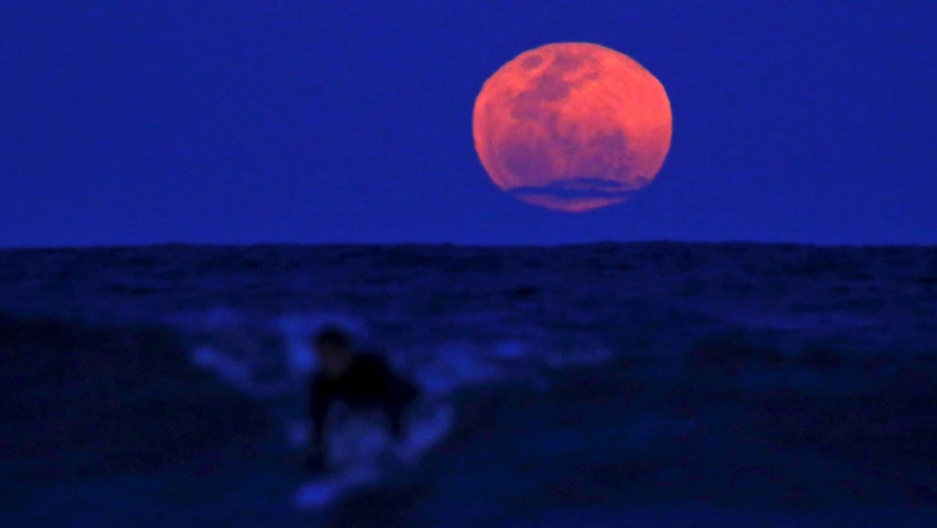 A surfer catches a wave as a super moon rises in the sky in Sydney, Australia. The astronomical event occurs when the moon is closest to the Earth in its orbit, making it appear much larger and brighter than usual.

“This is going to blow people's minds,” promises Dean Regas, an astronomer at the Cincinnati Observatory and co-host of the PBS program, Star Gazers.

And it did. Take a look at the lunar eclipse Sunday night.

The moon, appearing in a dim red color, is covered by the Earth's shadow during a total lunar eclipse over a staute at the roof of the town hall in Hamburg, Germany.

Sunday evening, there was four major moon events to watch in the night sky. There was a total lunar eclipse, the closest full moon of the year, the harvest moon and the completion of the tetrad, the fourth in a series of four lunar eclipses back to back.

It’s an astronomical event that’s relatively rare. A total lunar eclipse coinciding with a ‘supermoon’ hasn’t happened for 33 years, and won’t be repeated again for another 18 years.

As part of the eclipse, the moon will also turn a reddish-orange color — a phenomenon some like to call a “blood moon.”

“It actually turns this eerie orange-ish reddish color,” Regas says. “What you're seeing is the sunlight passing through the Earth’s atmosphere and almost shining all of the sunsets and sunrises of Earth onto the moon itself. It's a beautiful sight.”

What happens to objects that enter black holes?