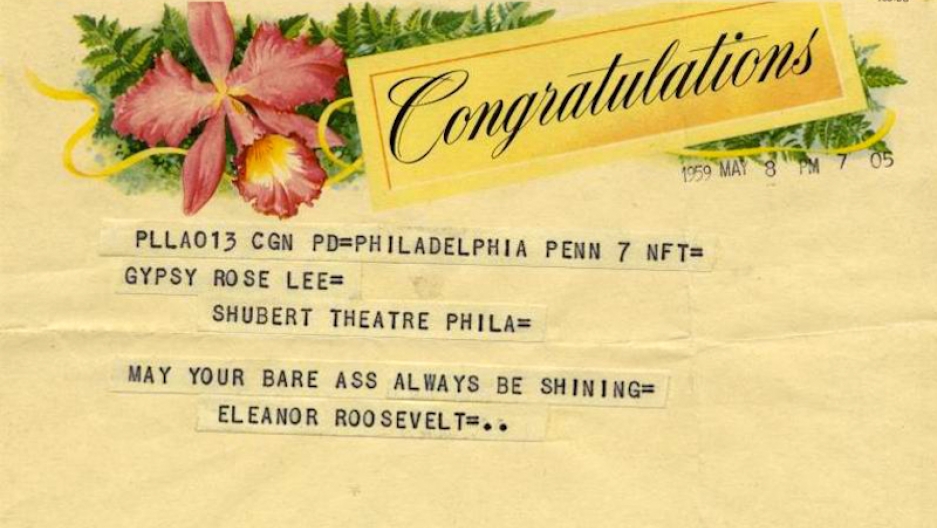 This week in "Thanks, Internet" ---An epic movie phone tree,Eleanor Roosevelt's booty call, the unseen powerof grammar, an otherworldly Elton John cover, and a Rottweiler's self-evaluation win the internet this week.

Some supercuts get old pretty quickly, but this one doesn't. Phone calls in movies fromDial M for MurdertoAnchormanare linked in one long phone call. It starts with simple salutations, but eventually turns into a bizarre narrative that somehow seems to work.
Thanks, Roshen!

The New York Public Library is digitizing its Billy Rose Theatre Division Archive. Thatmeans a whole world of ephemera, whichwasn't on the internet before, now is. The website Open Culture started sifting through it all and uncovered some gemsincluding portraits of Katherine Hepburn, costume sketches and, best of all, a telegramEleanor Roosevelt sent the burlesque dancer Gypsy Rose Lee on what must have been one incredible opening night. 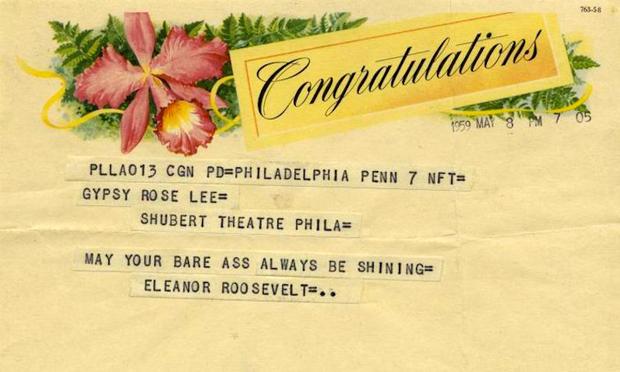 3. An Interactive Guide To Ambiguous Grammar

"An Interactive Guide To Ambiguous Grammar" is maybe the least click-baity headline of the year, but Vijith Assar's essayon McSweeney's also happens to be one of the most worthwhile reads of the year. It's ostensibly about the differences between the active voice and the passive voice --- how the sentence "The quick brown fox jumps over the lazy dog" transforms into the sentence "Speed was involved in a jumping-related incident while a fox was brown."

What's most amazing is that it turns out to be an examination of the language we use to report shootings of unarmed black men by police officers. Didn't see that coming, did you?

4. Such A Timeless Flight

Astronauts, etc.'s take on Elton John's "Rocket Man" is aces. It takes something that was already beautiful and makes it silkier, smoother, and maybe even a little sweeter.

did... did a rottweiler write this pic.twitter.com/cmK7icX2J7