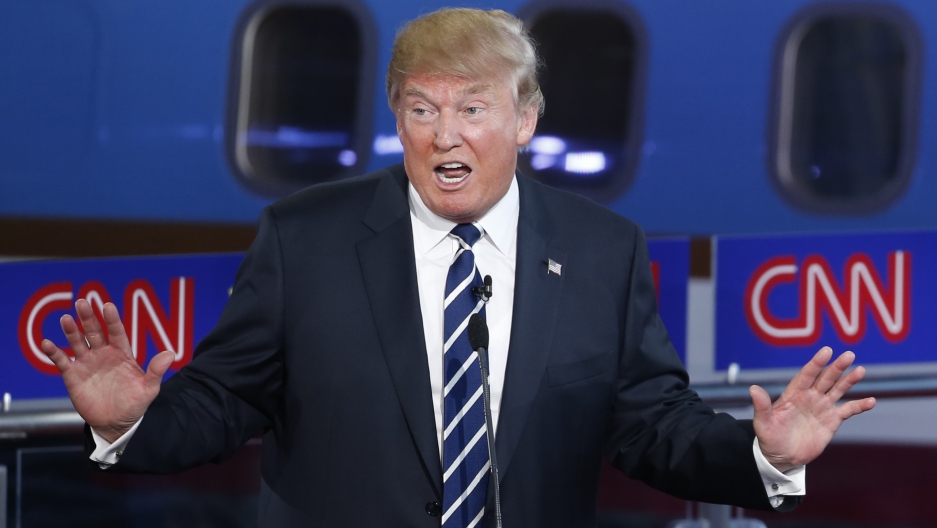 By any reasonable standard of what constitutes acceptable public discourse, Donald Trump’s presidential campaign should have ended on Wednesday at about 10:50 p.m.

That’s when he set his well-sprayed hair on fire by reciting some truly dangerous myths about vaccines on national television. It was, by any measure, a deeply irresponsible exercise. I’d call it pandering, except that it’s possible he believes his own foolishness.

It began when CNN debate moderator Jake Tapper invited candidate Ben Carson, a physician, to lambaste Trump for repeating the false claims of the anti-vaxxer movement, linking vaccines to autism. Carson responded mildly — too mildly. And that gave Trump an opportunity to pounce.

“I am totally in favor of vaccines. But I want smaller doses over a longer period of time,” Trump began. A few seconds later came this: “Just the other day, two years old, two-and-a-half years old, a child, a beautiful child went to have the vaccine, and came back, and a week later got a tremendous fever, got very, very sick, now is autistic.”

Sadly, neither Carson nor the other physician-candidate, Rand Paul, wanted to rile the conspiracy theorists they’re hoping to win over. So both men oh-so-respectfully disagreed with Trump while actually endorsing his statement that parents ought to be able to spread out the timetable for their children to get vaccinated.

“It is true that we are probably giving way too many in too short a period of time,” Carson said. Added Paul, who’s traveled down this road before: “I'm all for vaccines. But I'm also for freedom.”

In case you’re not up on all the details, Julia Belluz of Vox offers an overview of the “elaborate fraud” behind the thoroughly debunked link between vaccines and autism. As for Trump’s spread-them-out advice and Carson’s and Paul’s weasely responses, science journalist Tara Haelle writes in Forbes:

Vaccines are very precisely manufactured to include only what is absolutely necessary to induce enough of an immune response that the body can protect itself against those diseases. So a smaller dose wouldn’t protect a child. It would stick a child with a needle for no reason at all. And spreading out vaccines? That just increases the risks to the children, including leaving them more susceptible to the diseases for a longer period of time.

So what was CNN’s responsibility in promoting Trump’s life-threatening views? Some, such as Dartmouth College political scientist Brendan Nyhan, took to Twitter to argue that Tapper shouldn’t have asked the question in the first place.

Not good - bringing vaccines into the GOP debate is a terrible idea that risks making the issue partisan http://t.co/4PVXde7ZC5

I disagree. If, God help us, Trump actually got elected president, he’s going to be besieged by anti-vaxxers demanding that he translate his rhetoric into policy. Michele Bachmann in 2011 and Chris Christie earlier this year did enormous damage to themselves by embracing the anti-vaccine movement. Why should it be any different this time?

Still, Wednesday night felt like a botched opportunity to educate viewers about the importance of vaccines.

Media reaction to Wednesday night’s anti-vaxxer moment has been slow. I suspect we’ll see more as we get past the “Carly Fiorina won” analysis and dig deeper into what was actually said.

Perhaps the most addled take is offered by the Weekly Standard’s Fred Barnes , who writes that Trump “surprised everyone, including Dr. Ben Carson, by being well-informed on the use of vaccines. As usual, he was a powerful presence.” You can’t make this stuff up.

The New York Times has little except for a line in Gail Collins’ column and an item by Margot Sanger-Katz in its liveblog. The Washington Post is much stronger, with a long post by Michael E. Miller headlined “The GOP’s dangerous ‘debate’ on vaccines and autism.” Here’s how Miller describes Carson blowing the big moment Tapper handed to him:

For months, Carson has touted his medical expertise while on the campaign trail. And in the weeks since the first debate, the famed surgeon has risen in the polls as a milder-mannered, more rational alternative to Trump.

Now was his chance for a home run; a big hit as swift and incisive as any surgical operation.

In Politico, Ben Schreckinger speculates that Trump’s “weak command” of the issues — including vaccines — may be the prelude to his long-anticipated decline. “The conversation has moved beyond Donald Trump,” he writes. Adds Jamelle Bouie of Slate: “The good news is that this debate might mark the beginning of the end for Trump, who struggled to tackle substantive questions on foreign policy, his advisers, and what he’d actually do as president of the United States.”

We’ll see. More than 55 percent of respondents to a survey posted at the Drudge Report think Trump won; Fiorina comes in second with just 19 percent. It’s totally unscientific, of course, but so far nearly 550,000 people have registered their views.

Overall it was a dispiriting night. It was somehow appropriate that it ended with the news that right-wing hatemonger Ann Coulter was ranting on Twitter about the “f---ing Jews.” I mean, really. What else?

The vaccine issue, though, deserves to linger — and fester, and grow, until all but Trump’s most unhinged supporters understand that this man has no business being anywhere near the White House.