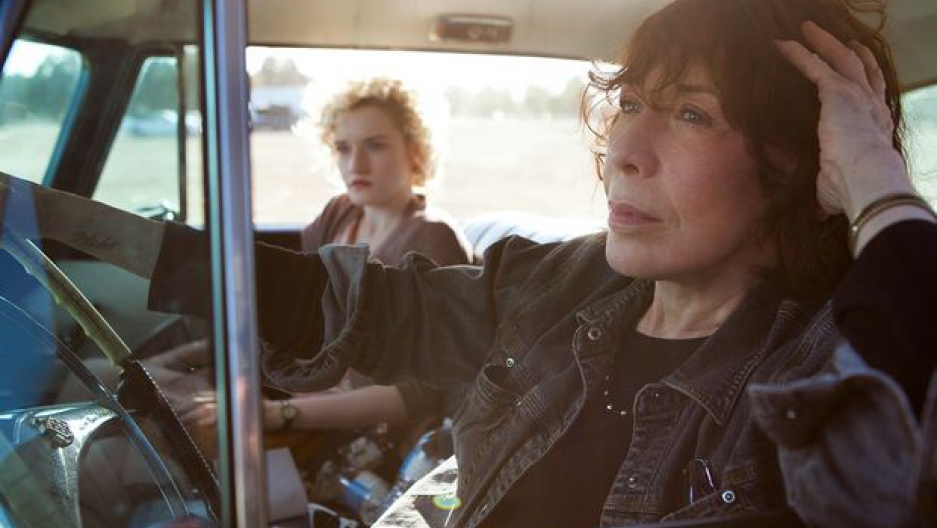 Lily Tomlin with Julia Garner in the movie Grandma

In her recently-released new movie, Grandma, Tomlin plays a grandmother who is ballsy, messy, sexy, angry and ferociously protective of her granddaughter.

Like many performers and comedians, Tomlin’s talents began to manifest at an early age and in a familiar setting: the back porch of her house. “I lived in an apartment house and I used to put on shows,” she says. “I would cast them from the apartment-house kids. They wouldn’t show up or they'd leave before the show would start, so I started doing it all myself.”

When she got into college, Tomlin figured she’d better prepare herself for a career, so she went into pre-med. That didn't last long; she didn't graduate college. But she did get into a college show that launched what would become her actual career.

“It's a long story,” Tomlin says, “but I'll just say that the producer, who was a student, says, ‘Oh, if we just had one more piece of material. The shows a little short.’ I'd been watching what they were doing, and I thought, ‘I do stuff like that in conversation.’”

She created a character that was a take-off on a wealthy Grosse Pointe matron. Grosse Pointe was a very rich Detroit suburb, where the Ford family lived.

“It was a sensation, because it was so relevant,” Tomlin says. “They had just found out that Grosse Pointe was a covertly segregated community, and had blown the lid off of it.”

She did her act on all the local TV shows and thought, “this would be so great if I could just make a living doing this.” So she went to New York.

At age 30, Tomlin was cast in the coolest, new number-one show in America — Laugh-In. She, and the characters she created for the show, become famous overnight. Some of those characters, like Ernestine, the old-fashioned telephone operator, Tomlin had already developed on stage.

“I brought her [to Laugh-in] and I brought a monologue to launch her,” Tomlin says. “The monologue was called “Mr. Veedul.” Mr. Veedul was really [the writer] Gore Vidal, and he loved that monologue.”

Tomlin’s character in Grandma, Elle Reid, may be among the closest to her real self that she’s ever played, the actress says. The old ’55 Dodge that Elle drives is even Tomlin’s own car.

If she could send a message back to her younger, stupider self, Tomlin says it might go something like this:

“Just barrel through life with all the audacity you can. Just be confident, be sure, be whole, be complete. Where you can learn something, learn it; and where you can impart something, impart it; and if you want to just assert yourself and bitch about everything, go ahead. You'll pay for it probably, but go ahead and do it. Whatever you do, do it audaciously.”