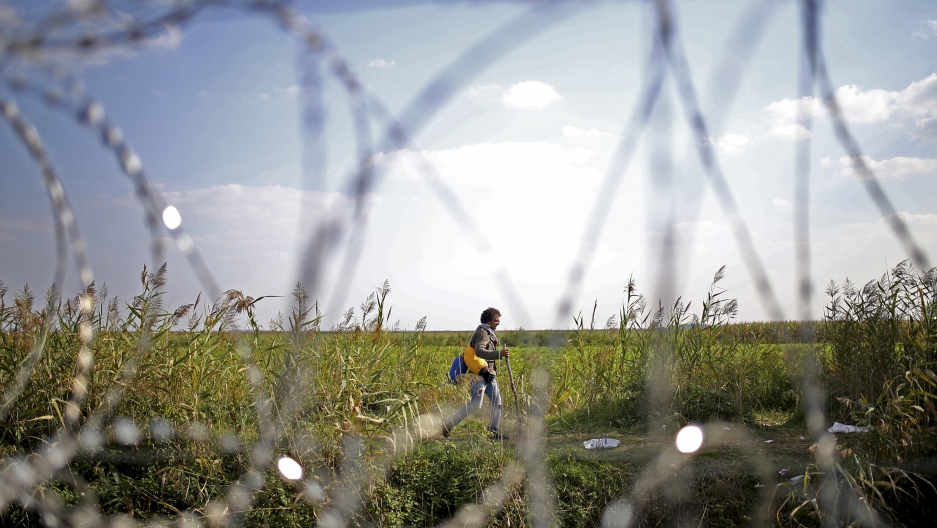 A migrant is seen through the fence as he walks before crossing into Hungary from Serbia at the border near Roszke, September 13, 2015.

Hungarian author Noemi Szecsi sympathizes with these migrants pouring into their country, but not looking to stay.

In a recent op-ed for The New York Times, she wrote that migrants "didn’t want to be stuck here — in the country where we Hungarians are destined to live our shabby little lives."

That sounds a bit gloomy. But Szecsi says that's the Hungarian psyche.

"I think it's a depressive country," she says. "I think it's a fact that Hungary has always had a high suicide rate. So it's a very, very frustrating place. As a Hungarian I can tell that it's not easy to live here because we are very gloomy people."

She says the frustration comes from loss after loss in the international political realm, dating back to the break-up of the Austro-Hungarian Empire that saw Hungary lose much of its land.

"Hungary is not a place where you would like to live," she says. "You see people coming here and they want to leave as soon as possible. It doesn't have a good international image."

Much of that deals with the insufferable living conditions in the refugee and migrant camps, or the Hungarian camerawoman who kicked and tripped refugees. It’s a whole lot of negativity.

Szecsi says this shouldn't be an example of all Hungarians.

"I can say that Hungarian people are really, very charitable," she says. "For example, today I heard that Migration Aid — a charitable organization — ordered donations to stop because they had such a huge amount of donations they were having trouble storing it. So I think the people in the country are really ready to help."

But Szecsi's point of view isn't shared by all Hungarians. The crisis is causing wrenching divisions within the country, and throughout Europe.

It's easy to generalize about those divisions — western European nations are often portrayed as offering a helping hand, while those in the east are seen as more resistant.

That's a cliché, argues Anne Applebaum, the author of Iron Curtain: The Crushing of Eastern Europe 1944-56.

"This refugee issue actually divides western Europe and divides eastern Europe," she says. "The Danes have been very clear that they don't want any refugees.  And they're not at all keen to expand the numbers in their country. The Dutch have been very quiet."

Applebaum says it's not just a matter of rich countries welcoming those in flight and less wealthy countries slamming the door.

"The Poles, the Hungarians the Czechs, the Slovaks, they feel, 'We're not able to absorb these populations because we've never done it before, we don't have the facilities, we don't have the teachers to teach them our languages,'" she notes.

And she says there's a deeper problem at play: there's no such thing as a unified European defense strategy, or foreign policy.

"Attempts to set those up have been successfully torpedoed by the larger countries, which wanted to have their own foreign policies, and so there isn't a cohesive mechanism or a cohesive way to think about it," Applebaum says.

The fallout of that failure is painfully clear in Hungary — a refugee exodus that shows no signs of abating.