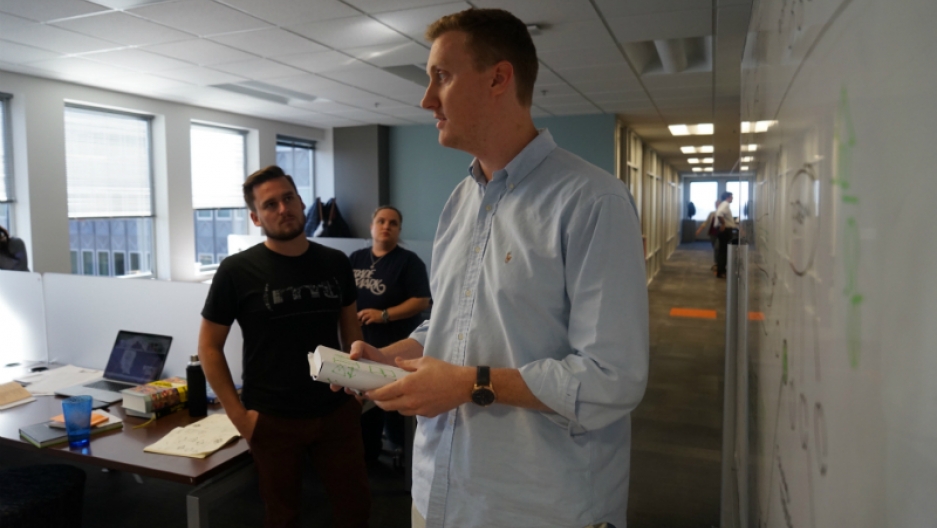 We partnered with the Dallas design firm70kft, and the team will be updating us throughout their design process. This post is by 70kft Junior Copywriter Daniel Wallace.

As a Southerner born and raised in Birmingham, Alabama, I've felt personally connected to this redesign challenge from the beginning. And as the project progresses, it's obvious how personal it feels for everyone involved.

During the early stages of this challenge, we presented as many ideas as possible, and we tried to give every concept a shot.

But this week, the gloves came off.

The two remaining concepts became fair game for open, honest critique. Our designers posted their work to the war room wall where they were quickly met with opposing perspectives. The result was an energetic, fiery discussion that helped the team elevate their concepts.

Conceptual contemplation gave way to specific questions about color palettes and form decisions. The intentions of the designers were measured against the team's perception of the execution. Often, one designer's idea of what defines the South fell flat on someone else within the group. We challenged both concepts with a sharply critical eye so that only the strongest idea would remain.

This refining process is far from uncommon in an agency setting, but it revealed how intensely passionate many of us feel about this particular challenge. For many members of the team, including myself, this project isn't about creating an arbitrary symbol for a distant location; this is about creating a design that embodies our home.

For me, the designs that evoke the most emotion are not the stereotypical images that many would associate with the South. Sweet tea, pecan pie and, yes, even barbecue (a subject that can draw polarizing opinions out of even the most reticent Southerner) didn't seem to sufficiently encapsulate the total Southern experience. We're focused on building concepts that define the character of the South, not a caricature of the South.

Throughout this stage of the project, we've narrowed our direction significantly. But in order to create a final concept that resonates aesthetically and conceptually across the entire South, we must first create one that speaks to our entire team.