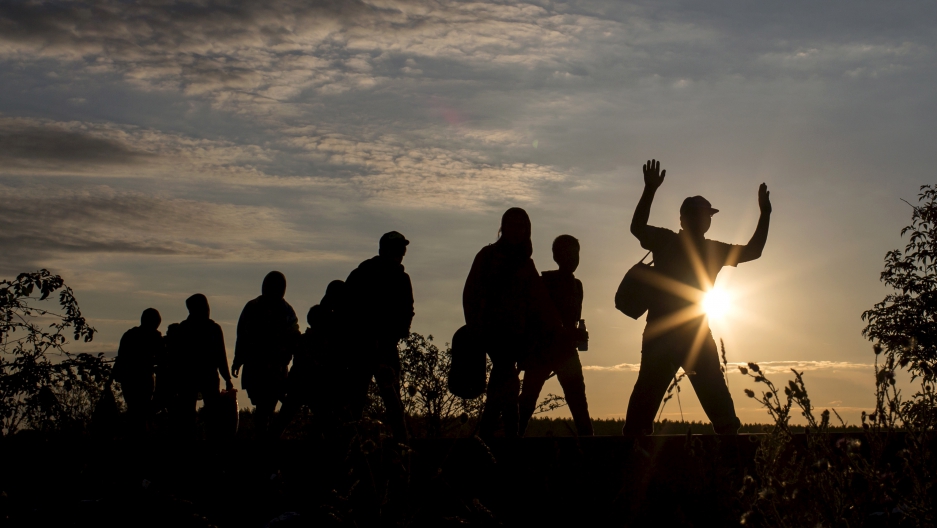 Migrants walk along rail tracks as they arrive at a collection point in the village of Roszke, Hungary, September 8, 2015, after crossing the border from Serbia.

As I write this now, there are hundreds, maybe thousands of people trying to make their way into Europe.

I say people because PRI has been struggling for a while over what to call them — migrants or refugees. This isn't a just semantic debate.

"It actually matters quite a bit," says Somini Sengupta of the New York Times. She explains why nuance matters in this question-and-answer story.

Below, a very condensed version, based on her interview Tuesday with PRI's The World:

"A refugee is someone who can show that he or she has left their home country to escape war or persecution."

"A migrant, broadly speaking, is someone who is on the move from one country to another."

Q. But couldn't you be a migrant and a refugee?

"Critics do say sometimes that the distinction between refugee and migrant can be imprecise."

Q. Then why does the difference "matter quite a bit?"

"Refugees are entitled to basic protections under the 1951 convention and other international agreements. Once in Europe, refugees can apply for political asylum or another protected status, sometimes temporary. By law, refugees cannot be sent back to countries where their lives would be in danger."

Q. So that's why I've heard politicians in Europe use the word migrant?

"Politicians may use the word migrant because their countries are under no legal obligation to offer them sanctuary."

Simply put: if you are a refugee you get certain rights in Europe and if you are a migrant, you don't get them.

For more stories about words and language check out our podcast: The World in Words.