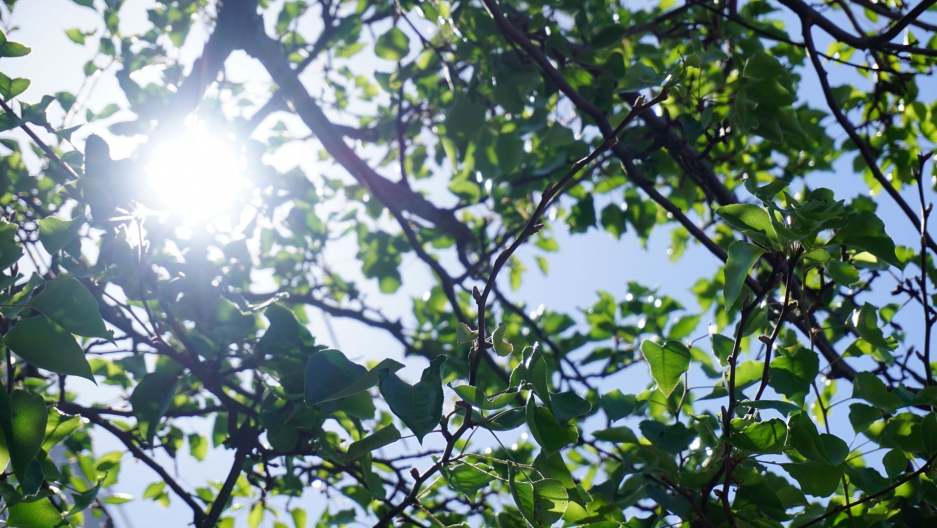 Can humans replicate this wonder of nature, to help in the battle against climate change? Leaves, and the photosynthesis that powers them, suck CO2 out of the air and turn it into a valuable raw material. Scientists are trying to do the same, and to use the  CO2 as a building block for renewable fuels and industrial chemicals.

Chris Chang says the weeds outside his chemistry lab at UC Berkeley are doing something incredible, something we humans still haven’t figured out how to do.

They use sunlight, carbon dioxide from the air, and water, to make energy and grow leaves and stems.

“Nature has really given us a lot of things to be wowed and amazed by,” Chang says “What we want to do is (build on) that idea — the idea of making something useful from water, carbon dioxide and light.”

What's the reality of carbon capture?

There are some promising advances on the carbon capture front. But can it really help combat climate change? For a reality check we spoke to Howard Herzog, senior research engineer with the MIT Energy Initiative, and asked where he's actually seen carbon capture technology working in a big way?

It’s an idea that makes so much sense, if scientists can swing it: turn all the excess CO2 we’ve been pumping into the air, and that’s helping to dramatically heat up the planet, from a problem into a resource.

Scientists around the country and the world are trying to copy photosynthesis.

RELATED: Is an artificial tree part of the solution to climate change? These guys think so.

Chang’s effort at tackling the challenge looks nothing like those weeds outside his lab, or any other plant.

“It’s essentially like a fancy cup” he says. A cup full of cloudy liquid that he calls a broth, teeming with bacteria.

The bacteria in the cup don’t normally run on sunlight or eat CO2 like a plant does. So Chang and his colleagues essentially hacked them.

First, they had them bioengineered to feed on carbon dioxide instead of their usual diet of sugars. Then they needed an energy source so they could put that CO2 to work.

Chang calls it “sort of our 'Frankenstein' type of experiment, but if Frankenstein was solar-powered.”

That’s the part of the hack you can see — a tiny solar panel, sticking into the cup like an umbrella in a cocktail.

Down in the broth, the panel is connected to a field of nanowires — microscopic wires orders of magnitude thinner than a human hair, as small as the bacteria themselves and designed just for them.

Chang says the nanowires stick up like blades of grass amid the egg-shaped bacteria in the broth. The hacked bacteria consume CO2 from the air and grab electrons from the wires. Add in some water he says, and bingo, they produce simple carbon-based molecules.

Essentially, the Frankenstein creation works something like a chloroplast — the part of plant cells that does photosynthesis. But instead of making the cellulose found in plants, these bacteria can make chemical building blocks for fuels or even plastics. 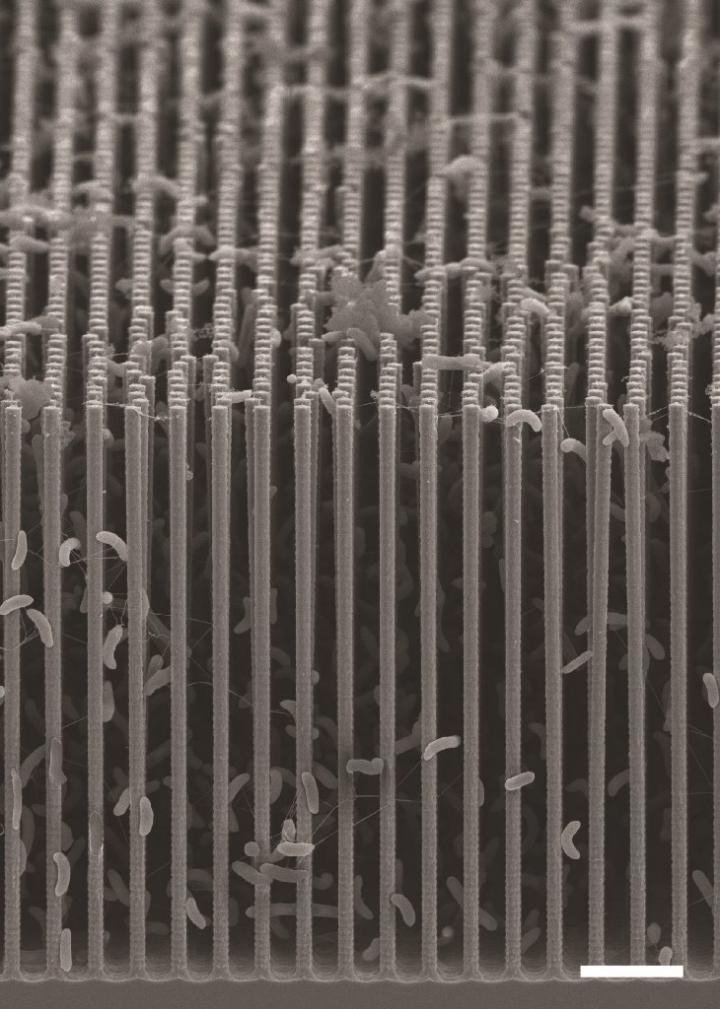 Bacteria cling to the nanowires in this scanning electron microscope image of the artificial photosynthesis system created by Chris Chang and his colleagues at UC Berkeley. Each of the wires is orders of magnitude thinner than a human hair.

Chang says the first thing he and his colleagues ended up making was methane, or natural gas — natural gas that didn’t have to be pumped out from underground.

The work of Chang and his colleagues at Berkeley is a window into a long-imagined future.

“Photosynthesis is just an absolute marvel of nature, so it offers a really powerful template and example for us to follow,” says Harry Atwater, the director of the Joint Center for Artificial Photosynthesis, started five years ago with more than $100 million from the US Department of Energy. The center is based at the Lawrence Berkeley National Lab but is not affiliated with the UC Berkeley scientists.

Atwater says the center’s goal is to use sunlight and waste CO2 to make liquid fuels, because that’s what the transportation industry relies on.

He says it’s very unlikely most people will fly in an electric powered airplane anytime soon, but that we might have airplanes running on fuel made from the sun and CO2, or even jugs of hacked microbes pumping out fuel for our cars.

Of course it’s a long way from the lab to the market, so all this might be decades away. But Atwater says technology can move faster than you think, and he points to the success of rooftop solar panels as a source of inspiration.

“When I was a kid, the idea of a photovoltaic industry that would produce significant power seemed like a far-fetched idea,” he says. “So that’s the sort of thing that gives me ultimate and profound optimism.”

Turning carbon dioxide into fuel source instead of a pollutant could be one of the climate change solutions the world really needs, Atwater says.

It’s why scientists like Chris Chang and his colleagues at UC Berkeley are doing all they can to copy those humble weeds growing just outside their door.