Trees and other green plants are nature's tools for sucking CO2 out of the air, but scientists say there aren't nearly enough trees to remove all the waste gas we've put into the atmosphere. So some are trying to create new devices that work like trees — like these "pine-tree looking pieces" of fabric being developed by researcher Klaus Lackner at the Center for Negative Carbon Emissions at Arizona State University.

If you want to boil the climate crisis down to one simple problem, it’s this: there’s too much carbon dioxide in the atmosphere these days.

Here's the skinny: CO2 traps heat. There’s about 40 percent more of it in the atmosphere today than there was in the millennia of human history before the Industrial Revolution, and that number is rising fast, since we just can’t seem to curb our thirst for fossil fuels.

So what if there were a simple solution? What if we had a way to suck that excess the CO2 right back out of the sky?

Well, actually, we do, says Chris Jones, a chemical engineer at Georgia Tech in Atlanta.

“These are our best ways of capturing CO2 from the air,” Jones says as he walks under a canopy of trees on the school’s campus. “Trees evolved over millions of years to do this very efficiently.”

Physicist Klaus Lackner stands beside a miniature greenhouse in his lab at ASU's Center for Negative Carbon Emissions, in which he's testing out the properties of his "artificial tree. Lackner says he expects a square mile of artificial trees could suck as much as ten million tons of CO2 a year out of the atmosphere.

Thing is, we just don’t have enough trees to fix our CO2 problem. In fact, the earth has fewer acres of trees every year. But Jones says that even if we planted trees everywhere we could, they still wouldn’t be able to pull enough CO2 out of the air to offset our emissions.

Which for Jones means one thing. “We have to come up with a chemical tree that can effectively extract CO2 out of the air,” he says.

Essentially mimic nature, only do her one better.

The technical name for the idea is direct air capture. And it is a tall order — to improve on trees, which have been honed by millions of years of evolution. In fact, some say the technology will never be efficient or cheap enough.

To which Jones and some of his colleagues reply, that’s ridiculous.

“People in the past said heavier than air flight is impossible, and all you needed to do is look at a bird and you know that’s wrong,” says Klaus Lackner, the director of the Center for Negative Carbon Emissions at Arizona State University in Tempe.

“Capture from air is not impossible. All you need to do is look at a tree and you know it’s possible.”

Chris Jones’ approach to the challenge is a ceramic cube about half the size of a loaf of bread and almost as light, hollowed out by hundreds of tiny square tunnels. If you hold it up to the light, you can see through it.

“All of us who own a car own one of these,” Jones says. “They’re in the catalytic converter in our car. Normally, these are used to clean up the exhaust coming out of our engine.” 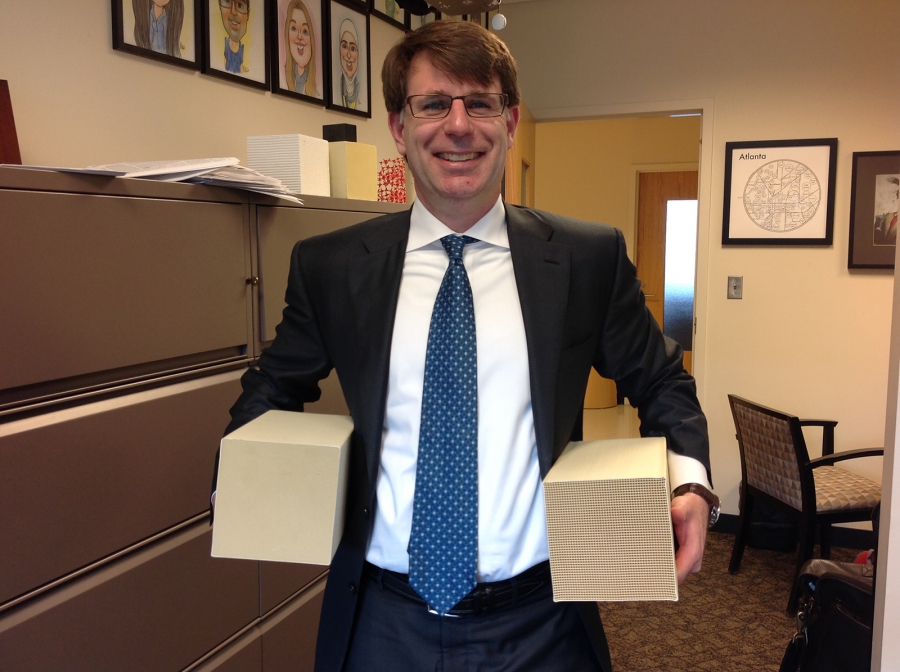 The artificial trees Georgia Tech chemical engineer Chris Jones is working on look nothing like actual trees. They're ceramic cubes full of tiny corridors, similar to the catalytic converter of a car, but coated with a material that absorbs carbon dioxide instead of carbon monoxide

The ones in our cars are designed to hold onto pollutants like carbon monoxide. The tunnels of Jones’s cube are coated with a material his team has developed that grabs onto carbon dioxide. As air flows through it, the lattice gradually fills up with CO2.

Jones has a pilot plant in California where he has 600 of these bricks stacked together into a block about the size of a semi-tractor trailer stood up on its end. The system uses fans to blow air onto the bricks, and steam to remove the captured CO2 so the bricks can be reused. The prototype sucks down about 1,000 tons of CO2 per year.

By itself, that’s an inconsequential amount. But it is a start.

Klaus Lackner’s group at Arizona State is taking a different approach. It starts with a cream-colored piece of fabric that Lackner’s colleague Allen Wright describes as almost “leathery … kind of like a very, very dense sponge.”

It’s a material that bonds with CO2, and is usually used to purify liquids like wine and beer.

Wright and Lackner used a pasta cutter to cut some of the fabric into thin strips — angel hair size — then wove the ribbons into a central rod.

What they ended up with looks like a duster. 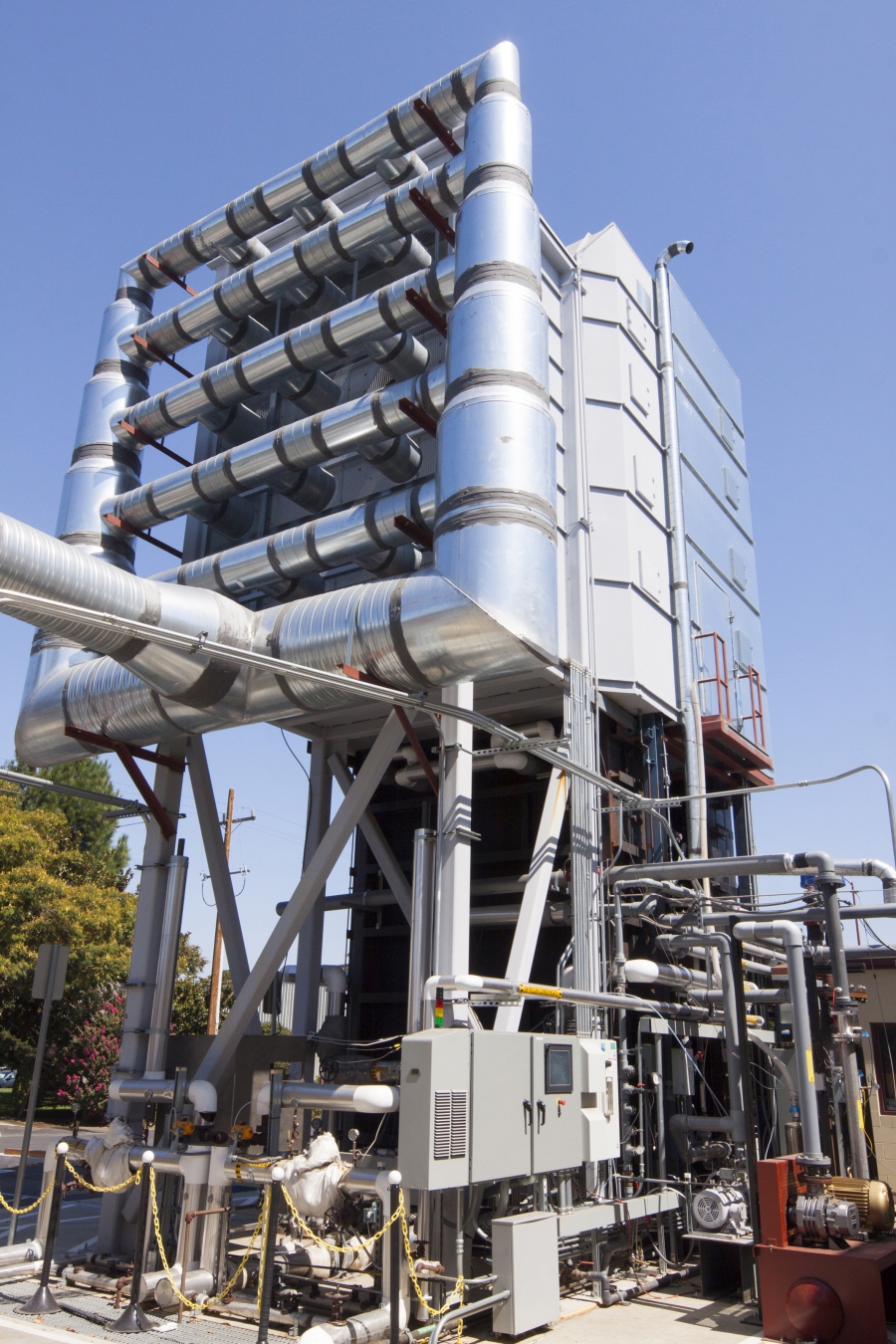 This pilot plant in California holds 600 of Jones's bricks. He says the prototype sucks down about 1,000 tons of CO2 per year.

“These are nature-inspired shapes — pine-tree looking pieces,” Lackner says, “where contact with the wind is very, very natural.”

Lackner says the eventual goal is to build devices much like a tree that would stand passively in the wind and absorb CO2 as the air blows over them.

No fans are necessary with their approach.

The material sheds the CO2 when it gets wet, so Lackner and his colleagues have also been working on ways to discharge the gas so it can be stored or reused later.

He says a full-scale version of the system — one with tree-like structures spaced out like a forest — is still 20 or 30 years away, but that initial results show real promise. Eventually, he believes, a square mile of artificial trees could suck up as much as ten million tons of CO2 per year.

That’s still a far cry from the 1.5 trillion tons or so that we need to take out of the air to reset our atmosphere, but again, it is a start.

And lots of other people around the world are barking up the same artificial tree.

The biggest hurdle right now is engineering these and other materials so they can grab enough CO2.

“The technical challenge” says Chris Jones at Georgia Tech, is “to make it more efficient and optimize the process so that we can reduce the overall costs.”

Jones says it’s his job to get the cost down to the point where policymakers have no choice but to say yes to the technology.

That could take a long time — remember Klaus Lackner’s estimate of 20 to 30 years to perfect his artificial tree.

What's the reality of carbon capture?

There are some promising advances on the carbon capture front. But can it really help combat climate change? For a reality check we spoke to Howard Herzog, senior research engineer with the MIT Energy Initiative, and asked where he's actually seen carbon capture technology working in a big way?

The first step was to show that direct air capture of CO2 was possible, and that’s been done.

“We can reverse the CO2 concentration in the air,” Lackner says. “We cannot reverse the melting of a glacier. We’re already way too late. But we will do it.”

And the carbon dioxide will be waiting for us when we do.