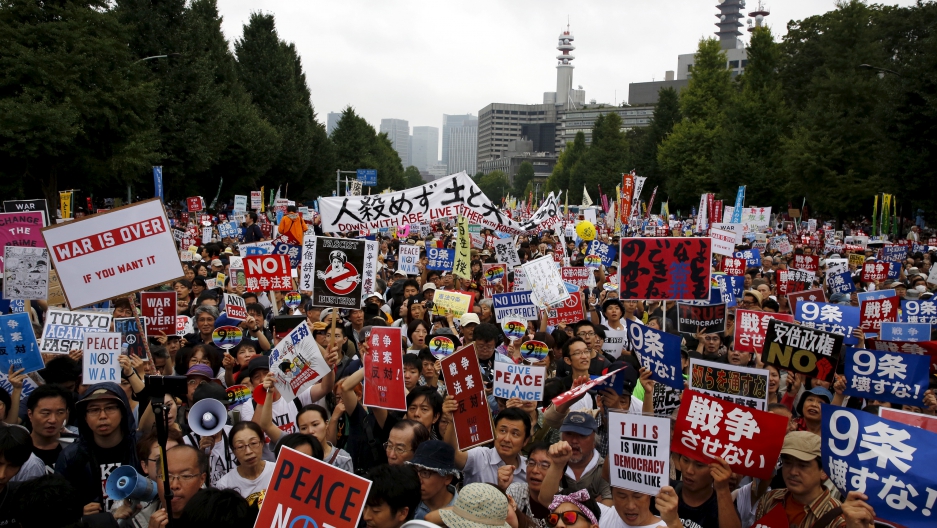 "No to war legislation!" shouted protesters in the streets of Tokyo on Sunday.

The legislation in question aims to reinterpret Japan's pacifist constitution, which prohibits the country's defense forces from engaging in military action, except in cases of direct national defense. The proposed changes would grant Japanese military forces the right to "collective self-defence," giving Japan more leeway to cooperate militarily with allies such as the US. This would be a shift for a country that has not engaged in combat abroad since the end of World War II.

Protests have been happening all summer, but this Sunday's rally was especially well-attended. Organizers told the Japan Times that almost 120,000 people surrounded the Diet building, Japan's Parliament. But police estimates put the numbers closer to 30,000.

"I'm not so sure they were that massive, actually," said Chris Hughes, professor of Japanese studies at University of Warwick. "I think the demonstrations do show a certain depth of feeling in Japan, and I think opinion polls show there's a depth of feeling about the issue. But actually the protests themselves are not that large if you look at the history of protests about security and military issues in post-war Japan."

Organizers compared the recent rally to a massive demonstration outside the Diet building more than a half century ago that numbered around 130,000 people. "When Japan revised the security treaty with the US in 1960, we really were talking hundreds of thousands of people in the streets, national demonstrations, national strikes, that kind of thing," Hughes said.

Both the 1960 protests and the one on Sunday dealt with a prime minister trying to push through security legislation unpopular with many Japanese.

Protesters today feel that reinterpretating the role of the military as proposed would be unconstituional. They called on Prime Minister Shinzō Abe to resign. "The Japanese people themselves tend to be anti-military leaning and strongly pacifist leaning. So they're not fond of anything that would get Japan involved in military adventures" said James Schoff, a Japan expert at the Carnegie Endowment for International Peace in Washington, DC.

In 1992 there were similar questions when Japan agreed to participate in UN peace-keeping missions. "There has been this stretching of interpretation of the constitutions's prohibition on war to settle disputes. And I think that potential is unhealthy for democracy and dangerous that it could happen in the future," said Schoff.

Abe's government has said the proposed package of bills is necessary to protect Japan from nuclear North Korea, an increasingly assertive Chinese military, and to strengthen Japan's own military alliances.

Schoff said recent protests have been larger than expected, but they are not likely to succeed in killing the proposed legislation. "The explanation has been relatively poor by the government about this broad package of bills. But that said, the government coalition has the votes to pass this and they intend to pass it within a couple weeks."

That will come as good news to Washington, "primarily because they allow for a more integrated cooperation between US and Japanese forces," Schoff said.

"Overall, I think the US is hoping for more help in the region."