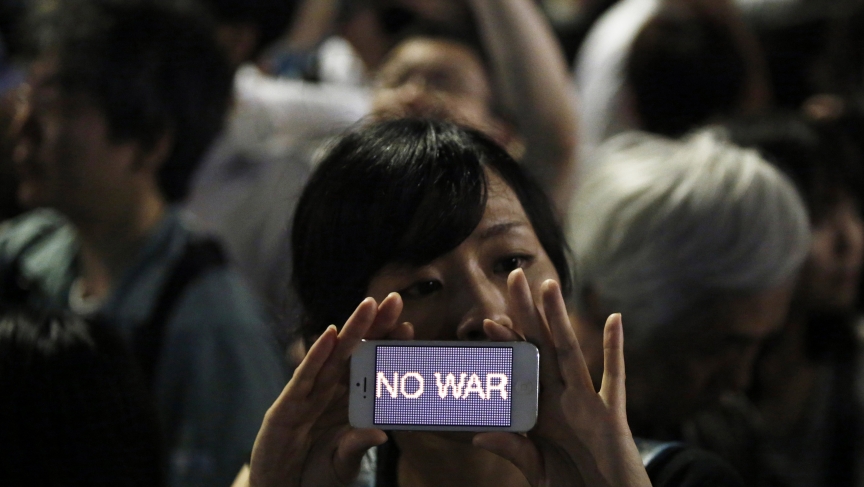 In a cluttered office on the outskirts of Tokyo, Toshiyuki Obora is packing up after a recent demonstration. His group meets regularly at a local military base, but their grievances extend beyond militarization.

Lately, Obora and his small, dedicated group have been out protesting an announcement in July by conservative Prime Minister Shinzo Abe that he plans to “reinterpret” Japan's pacifist constitution. The details are still being ironed out, but the plan is to make it so Japanese troops can more directly support military allies like the US.

Obora is a veteran protester, and at times, he has pushed Japan's limits for civil disobedience. In 2004, he and two others were arrested for protesting Japan's involvement in the Iraq War. They were not lobbing Molotov cocktails or burning cars; they were distributing fliers to soldiers. The government took the case to the Supreme Court and finally got them convicted for trespassing.

“We had been giving out fliers for decades with no problems,” Obora says. “Supermarkets do the same thing but no one gets arrested.”

Protests weren’t always so tame in Japan. In the 1960s, people filled the streets to demonstrate against the growing military ties between Japan and the US.  And some protest groups have remained active on the island of Okinawa, where the US has military bases. But over the decades, Japan’s protest movement has shriveled. Today, Obora's group has shrunk to six core members. But the nuclear disaster at Fukushima, and now Abe’s proposal to reinterpret the constitution are helping to create a new generation of protesters.

Three days after Prime Minister Abe announced his plan to amend Article Nine of the Japanese constitution, demonstrators gathered outside his office and chanted for him to resign.

Article Nine “revokes war as a sovereign right of the nation.” Hirai Tadashi, who came out to protest Abe’s plan, considers that constitutional phrase a pillar of Japanese identity — his in particular.

“I was born in 1947 on almost the exact same day the constitution was written,” he says, “so I have a great attachment to it. Article Nine is what protects the peace in Japan, so we must protect it.”

Since Abe’s announcement, thousands have come out to protest. New anti-war groups have formed, and people are organizing online. One demonstrator made international news by setting himself on fire at a busy Tokyo train station. Now, people who have never protested before are coming out — people like Yuki Sato.

“I want to talk about the news,” Sato says, “but none of my friends will discuss it.”

After Fukushima, people in Tokyo and other cities started demonstrating against nuclear power and the treatment of displaced residents. Then in December, protests broke out when the government passed the State Secrets Act, a law that increases the penalty for leaking and reporting military secrets.

Sato, for one, never thought she would come out and protest, but then she started noticing the news and wanted to do something about it.

“I didn't use to think about politics,” she says, “but then the nuclear incident happened and there was radiation everywhere. Now, it seems like we are going to go to war.”

Liberal protesters are not the only ones hitting the streets. Ultra-right-wing groups are counter-protesting the anti-war demonstrations. At a recent rally, peace protesters came out to call for the removal of US military bases from Okinawa. A far-right group showed up with signs supporting Japanese militarization. The recent tensions with China are only fueling the clash between the two groups.

Much of the consternation on the left over Abe's decision to re-interpret the constitution may come not only from what he has done, but how he is doing it. Instead of amending the constitution, which would have required him to go through the legislature, he made a cabinet decision.

“When you do such important things in a hasty way, of course people think maybe he has some agenda, something he doesn't tell us,” says Yuko Kawanishi, a social psychologist.

Yuki Tamura, who is 27, worries that the agenda might involve someone like him being sent into battle. That's why he came to protest in front of the prime minister's office.

“I am a young guy,” Tamura says, “so if Japan decided to go to war I could be sent to fight.”

This is Tamura's first protest, but he did not talk to his friends about it.

“If you talk about politics among young Japanese people,” he says, “you will lose your friends.”

By the third day after Abe's announcement, the number of demonstrators had diminished. A light drizzle was falling and commuters hustled by. After a young protester finished leading the cheer, an elderly woman took the megaphone. She said she wanted to motivate the crowd with a song from the old days. It was “We Shall Overcome.”

Junko Takahashi helped with this story.