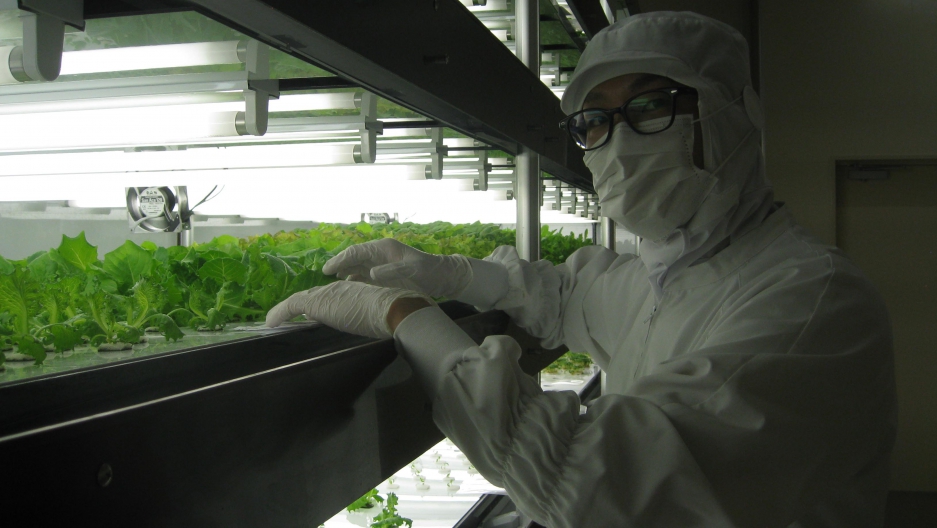 Masahiko Kakutani is the main grower behind "Tokyo Salad," the Tokyo Metro’s new farming enterprise, which is housed underneath the Tozai Line.

Tokyo is a big city. But despite what you see in the movies, Tokyo is a pretty green city. There are parks and gardens scattered all over and even a small mountain out west.

Still, when you think of farming, what typically comes to mind is rolling pastures and open skies, not a beautiful city park. And definitely not subway tracks.

In a prefab warehouse in Nishi Kasai, a less than idyllic neighborhood in the eastern part of the metropolis, I meet Masahiko Kakutani. He works for Tokyo Metro, the company that runs the vast subway system in the central part of the city. Kakutani is the main farmer behind "Tokyo Salad," the Metro’s new farming enterprise, farming that takes place underneath the Tozai Line.

Kakutani takes me inside and tells me that they grow the crops in a hygienic clean room. Then he disappears. When he comes back, he’s in a scientist-looking outfit. He hands me a white coat, mask and hat to put on — and alcohol wipes for my microphone.

We walk through multiple doors, into an air shower where we spin three times, and finally step into a room filled with large shelving units and an elaborate system of tiny pipes. This is hydroponic farming, and it’s a little sci fi.

Here, fluorescent bulbs hanging from shelves act as sunshine, and the plants float in a water solution that is loaded with the nutrients they need to grow.

They put in “zinc, phosphorous, potassium — the components that are in the soil,” Kakutani explains. ”I can’t tell you everything we put in. That’s our trade secret."

From planting to harvest it takes about three to five weeks, depending on the type.

He’s hoping to turn their produce into products that consumers will also value more than just as plain vegetables.  So don’t be surprised if you see a Tokyo Metro smoothie shop or even salad vending machines in the subway.

Until this past January, Kakutani had never actually farmed a day in his life. He doesn't have a background in agriculture or science, and he definitely never dreamed he’d be growing vegetables while working for Tokyo Metro.

Kakutani’s official title is actually head of strategy in the business development department. His main job is to think up and develop new business ventures. Economically, he says, the subway’s doing just fine. But Japan’s population is dropping, so Tokyo Metro thought it’d be a good idea to start exploring alternative business opportunities.

Hydroponics seemed like a good idea, and after the Fukushima nuclear disaster, Kakutani says, “people’s consciousness about the safety of their food went up. As Tokyo Metro, one of our principles is safety and peace of mind. So we thought we could do the same for food.”

Inside Tokyo Metro’s hygienic hydroponics lab, there’s no soil and there are no bugs or pesticides. You don't even need to wash the vegetables before you eat them Kakutani explains, before reaching over and plucking off a red mustard leaf for me to try.

It’s fresh, tasty, and makes my mouth kind of tingly. Piri Piri as they say in Japanese.

Kakutani tells me he didn’t know there were so many different kinds of lettuce before he started farming, but these little plants are kind of like his babies now. And red mustard leaf? It’s good, but probably best sold in a mix.