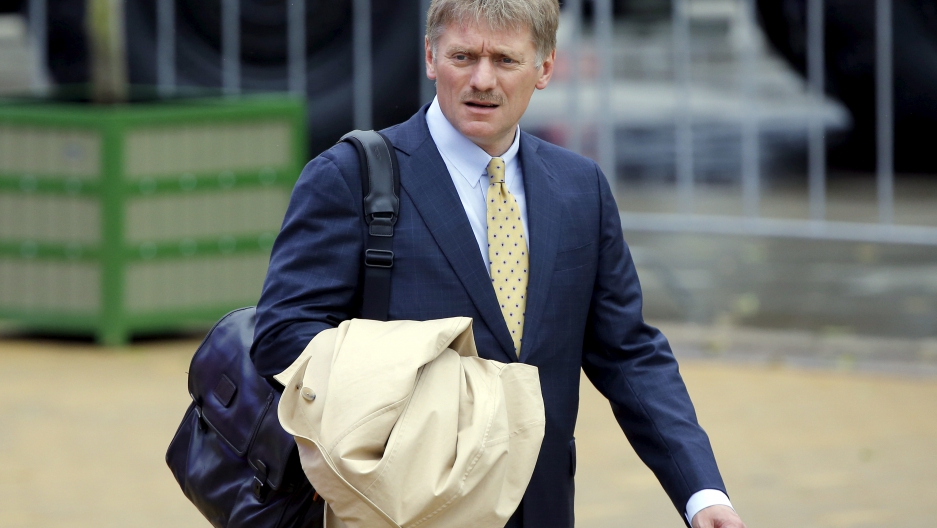 Kremlin spokesman Dmitry Peskov arrives for the opening of the Army-2015 International Military-Technical Forum in Kubinka, outside Moscow, Russia, June 16, 2015.

The couple booked Sochi's premiere Rodina hotel overlooking the shores of the Black Sea.  Celebrities and VIPs from the Russian world of politics, sport, and entertainment arrived in droves.  Caterers — along with food and wait staff — were flown in sfrom Moscow. State television even gave coverage of the celebration on the national evening news.

But the perfect planned wedding day took an unpredictable turn when a guest posted a photo on social media of the couple embraced in a nuptial kiss. The problem? The picture inadvertently revealed that Peskov was wearing a watch. And not just any watch at that.

Cue the online melee and a growing PR disaster.

Russian blogger/opposition leader Alexey Navalny was the first to accuse of Peskov of outright corruption, noting the watch cost more than most Russians' apartments.

"The happy groom has been working for the State since 1989, and couldn't earn so many millions legally,"  wrote Navalny on his blog.

Soon  Russians were posting photos of their own watches online and detailing the comparatively modest pricetags. Several simply drew pictures of Peskov's 'skull watch' on their arms with a pen.  Pictures of mock Peskov skull-themed handbags, jewelry and other high end accessories went viral online.

Peskov was quick to deny allegations of wrongdoing — noting the watch had been a wedding gift from his wife.  "How could I not wear it?" he told reporters in a morning Kremlin briefly usually devoted to the President's activities.

Navka, too, went public to explain the gift, saying she had worked hard to earn enough money to give her bethrothed the Mille watch.

'Watching' as political bloodsport is hardly new in Russia. In recent years, Kremlin critics have repeatedly seized upon luxury timepieces as symbolic of entrenched corruption among the country's political elite.

In 2012, Russian opposition members publically acccused Mr Putin of owning a series of expensive watches, including a $500,000 Lange & Söhne. That same year, bloggers discoverd a photograph of Russian Patriarch Kirill — a close ally of President Putin's — wearing a $36,000 timepiece.  A subsequent effort to digitally scrub the watch from the offending photo the Church's website only made things worse. The watch was no longer on the Patriarch's wrist, but the watch's reflection was still visible on the table where Kirill's arm lay.

"For us it's a symbol of corruption. For them it's probably a symbol of their status," says Anton Pominov, head of Transparency International, Russia, a NGO that monitors corruption practices globally.

Pominov notes that, whatever the truth, the Peskov watch scandal is just the latest episode to reinforce Russia's reputation as a corrupt place. Transparency International currently ranks Russia at 127th place on the organization's 'Corruption Perceptions Index', alongside Nigeria and Iran.

Indeed, the Kremlin launched its own high-profile anti-corruption campaign earlier this year.  New anti-corruption efforts include requirements that all public servants declare their salaries and holdings. State media has lavished coverage on the arrests of several high-profile politicians accused of stealing breathless sums.  Russia will even play host to the next United Nations Convention against Corruption in St. Petersburg this November.

Yet Transparency International's Pominov worries these measures amount to more simulcraft than real reform. "It's very easy to imitate anti-corruption fights," says Pimonov, "but it's very hard to prove that the anti-corruption crackdown something they actually mean."

Now, if all that sounds like a long way to travel from a luxury watch sighting at a Sochi wedding this past weekend, consider that Peskov and his bride may have yet another problem on their hands.

According to Russian tradition, gifting a watch at a wedding is tantamount to very bad juju for the relationship. Rosa Syabitova, host of the popular dating show Let's Get Married on Russian state television, tells The World that, in Russia, wedding watches are associated with "giving your time away on this earth...even death."

But Syabitova admits, superstitions aren't for everyone.  Even she doesn't see what all the fuss is about over Peskov's watch. “If you’re successful, and you live on a certain level and socialize with people of a certain status, of course you wouldn’t even dream of giving something cheap,” says Syabitova. “But I understand why journalists have to cover it. You’re providing information to average people."

Indeed. To most of whom a $620,000 ‘skull watch’ — Peskov's even has its own twitter page — tick-tick-ticks like a scandal whose time has come.