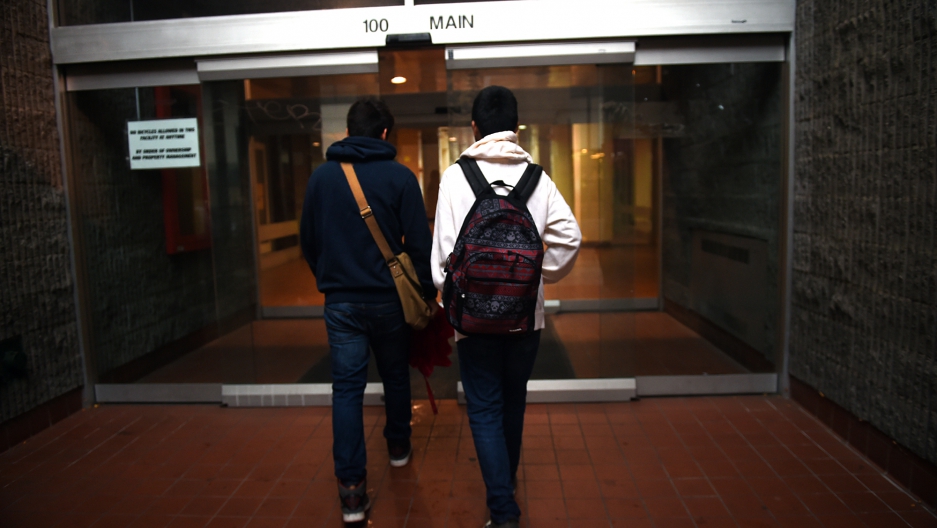 Hempstead, a town on New York's Long Island, is one of many places in the US with established Central American communities where children from El Salvador, Honduras and Guatemala are resettled. About 39,000 unaccompanied children are expected to enter the US this year, according to the Migration Policy Institute.

At the start of the summer, Hempstead Union Free School District had two high schools. This was not the original plan.

The bigger school is on a tree-lined street. The second one, about a mile away, opened downtown in October in converted office spaces, upstairs in an old bus terminal building that also holds a Dunkin' Donuts, empty storefronts and a gold jewelry exchange. This second school was supposed to be temporary.

But late last school year, as summer began, Rene Pineda, 17, remained at the makeshift school. His mission is to learn English. He trekked nearly 3,000 miles from El Salvador in the summer of 2014 to cross the border on foot and reunite with his dad, who has lived in Hempstead for 14 years. Pineda said kids his age complain too much. He’s been here a year now, and he’s grateful to be in this country.

But his friend, Javier Llanes, who also made the journey on foot from Central America last summer, feels differently. Llanes said they could be learning far more in the US. At the downtown school, there’s no one to practice English with, Llanes says. His classmates speak Spanish. If they were at the main high school, where the rest of the kids are, they’d learn English fast, he said.

When Llanes and Pineda first registered for school last fall, officials initially told them to go home; there was no room for them. Hundreds of unaccompanied minors, youth who crossed the border alone, had arrived over the past year and the Hempstead schools were overcrowded, officials say. After an uproar and national media attention — New York state and federal law mandates that all children in a district be enrolled and registered in the district in which they reside — the "transition" school opened downtown.

State officials also found that the temporary school had questionable standards. One report by the New York Civil Liberties Union detailed how teachers had high school students cut out letters with scissors to learn the alphabet. Jason Starr, a lawyer with the New York Civil Liberties Union, said one student looked insulted at the level of instruction. “The teacher was holding up large print photos. And she was saying in Spanish, 'This is an aguacate. In English, this is an avocado.'" That, he said, is "not science."

This year, integrating the unaccompanied minors into schools here has become an issue in recent school board races. Thomas Parsley, a long-time Hempstead resident who passed out flyers at the recent election, said he understands that the new students are entitled to services and education, but wants to know “why here?” Hempstead is a long-suffering district with low graduation rates and high poverty.

Many of the recently arrived students have family members who already settled in Hempstead, a town that’s about half Latino and half African American. Carlos Encarnación, a Latino advocate with New York Communities for Change, supported the only Latina on the Hempstead board. He said the young migrants are scapegoats for the district’s old problems. “Here we perceive ... animosity against a group of students because they speak a different language,” he said. “In my book that only has one name.”

Shelley Brazley, a school board member, said the school’s policies are not discriminatory. “The problem,” she said, “is we just don’t talk to each other.” She said the schools need funding from the state to enroll an influx of new kids. She also said leadership in the district is dismal, citing a state probe that found the superintendent was being overpaid by $30,000 and did nothing to correct it.

The state attorney general has asked the school board to appoint their own watchdog — an independent monitor as well as an ombudsman — to make sure the school properly enrolls and registers students. But Brazley says they need more help than that, both in the form of money and leadership, from the outside.

The New York Attorney General’s office says it will continue to closely monitor the district’s enrollment policies into the coming school year.

School officials say they plan to close the temporary school next year.