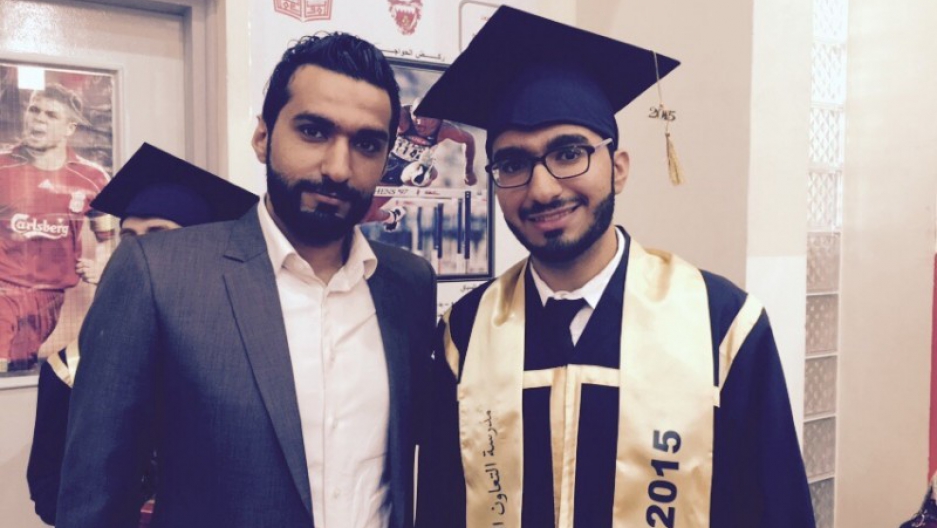 Mustafa Mohammed Ismael, right, with his brother Ali, at his graduation ceremony.

It's the time of the year when high school students graduate and prepare to go to the university of their choice. But for some students in Bahrain, specifically Shiites, activists and government opponents, the path that awaits them is not so bright.

One of these ill-fated students is Mustafa Mohammed Ismael, who is in jail instead of pursuing his dream of studying medicine. Mustafa, the son of an imprisoned political activist, graduated top of his class from high school with grades averaging 98.8 percent.

On August 15, 2013, Mustafa, who is now 18, was walking out of his grandfather's house in Nuwaidrat when he was stopped by security patrol. He was charged with illegal gathering and initially sentenced to six months. The court of appeal later reduced the sentence to three months and released him on bail 24 days later.

Mustafa's family told Al Wasat daily newspaper that his lawyer Mohammed Al-Muttawa attempted several times to persuade authorities to reduce the charges to a fine, so he would be able to continue his education, but failed.

He decided to turn himself in on July 10 to complete the remaining time of his sentence (two months and six days) during the summer holidays, expecting to be released on September 16. In a letter he wrote before he entered prison, he said: “In prison I spend my night and day … a product of my success and academic excellence.” He continued expressing how desperate he felt when he was first arrested, and then the glimpse of hope he regained after being released, explaining he continued to work hard to reach his goal. Yet his dream to become a doctor and serve his country is rewarded with imprisonment.

Mustafa's decision to turn himself in was encouraged by his family members, his brother Ali says, to avoid future complications and the risk to be arrested any minute while he is in the middle of his university studies. Ali says if his brother hadn't turned himself in he would have faced difficulties going anywhere or passing check points as there is an arrest warrant for him. Their reasoning was the earlier he went to prison, the earlier he got out and resumed his life. 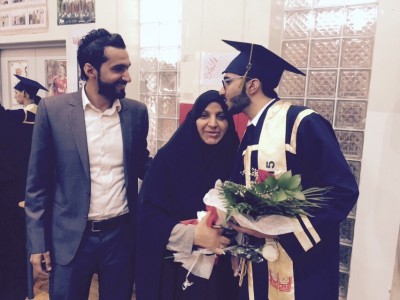 Mustafa, right, kissing his mother's forehead at the end of his graduation ceremony.

Mustafa is not the only one arrested from his family. His father, Mohamed Ali, is a political activist serving 15 years in jail since March 24, 2011, on charges of “plotting to overthrow the regime”. He is one of the 13 prominent leaders remaining in prison for their role during Bahrain's popular uprising in February 2011.

Mustafa is now detained at the Dry Dock prison waiting for his brother to update him on his scholarship news, and news of admission to universities abroad, keeping in mind that his mother is the only breadwinner in his family at the moment.

He was a candidate for the Crown Prince's International Scholarship Program and reached to the final stages but didn't get it. The scholarship programme serves the vision of the Crown Prince Sheikh Salman bin Hamad Al-Khalifa as it is stated on the program's website “to develop young Bahrainis from all walks of life to take key positions in Bahrain's public and private sectors in the future.”

Despite his academic excellence and qualifications, his options are limited, given that should he complete his sentence, he will be released a bit too late for some universities’ starting date. Mustafa has to look for options he could take after his release in mid September.

His brother Ali says that Mustafa was offered another scholarship by the Ministry of Education, except it was in mechanical engineering, far from general medicine.

Mustafa is not alone when it comes to what many have described as the “discriminatory process” of distributing scholarships in Bahrain. A heated debate is taking place in Bahrain about the criteria for the selection of scholarship recipients. According to activists and Bahraini citizens, the government's track record suggests discrimination against the Shiite students when granting scholarships, especially those who have expressed opposing views to those of the government. Their views and frustrations were compiled on an active Twitter hashtag in Arabic that translates to “the massacre of scholarships“.

According to the Bahrain Center for Human Rights statistics from February, 400 children in Bahraini prisons are being held for politically motivated charges. Many of them have been subjected to ill treatment and torture.