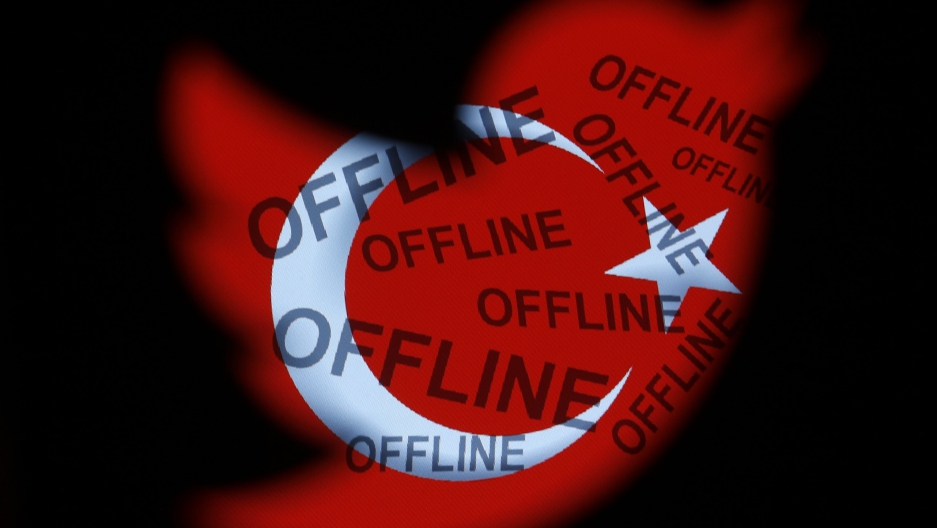 A Turkish national flag with the word 'offline' projected on it, is seen through a Twitter logo in this photo illustration taken in Zenica, March 21, 2014.

For a hot minute early Wednesday morning, the hashtag #TwitterBlockinTurkey was trending. A Turkish court had ordered the service blocked to prevent Turks from seeing graphic videos and images of the Suruç bombing on Monday, which left 32 dead and scores injured.

Did this act of broad censorship leave Turkey’s Twitter happy activists in the dark, unable to share information as the country confronts a deepening political crisis?

Not really. They just switched to VPN.

#TwitterBlockinTurkey During the gezi protests, we installed so many vpn programs, we don't notice bans anymore.

Turkey has banned Twitter several times over the years, including over a two-week period last March when Prime Minister Recep Tayyip Erdoğan vowed to "erradicate" the site. That ban was overtuned by a court. Still, avid users have learned to adjust.

“Of all the things to worry about now in Turkey, to have the country ban a source of information seems both an overreaction and totally misplaced,” says Zeynep Tufekci, an assistant professor at the University of North Carolina, Chapel Hill, and also a fellow at Harvard’s Berkman Center for Internet and Society, and a specialist on Turkish Internet activism. “Unfortunately, it seems like instead of controlling the situation, there is this emphasis on controlling the flow of information. It doesn’t work, and it doesn’t address the tumultuous situation to begin with.”

This particular ban was in response to a court order blocking images showing dead bodies of the victims, Tufekci explained. The bombing targeted students and activists who were on their way to help rebuild the Syrian city of Kobane. Turkish authorities have identified a suspect who they said had ties to ISIS and had spent time in Syria.

While Facebook and YouTube took down the offending images quickly, Twitter had begun the process of removing but was a few hours behind, Tufekci said. The service was back up a few hours later. While the gruesome videos and images showing the aftermath of the blast appear to no longer be available on Twitter, they are still accessible on LiveLeak and elsewhere on the Internet.

Tufekci believes the ban illustrates the problem with Turkey’s approach to Internet regulation. The country’s Internet law, which has been called “draconian” by rights activists, makes Internet Service Providers legally liable for content their users can access, making companies quick to ban entire services or sites when responding to government orders.

“It’s very awful situation, it’s a very volatile time. The state’s knee jerk reaction sometimes is to try to block information and hope that things calm down, but that doesn’t address the underlying problem,” she says.

And the problems continue to mount. Around the same time the Twitter ban was lifted, the Kurdish militant group the PKK claimed responsibility for executing two police officers in southeastern Turkey. The group said the attack was revenge for the Suruç bombing and said the officers were targeted because they had collaborated with ISIS.

The Turkish state has ample experience with failed Twitter bans.  Authorities have continually tried to ban an anti-government account leaking police information, only to see the account reappear again under a new name. While the BCC noted that one incarnation of the account, @fuatavni, was banned last August, the current one, @fuatavni_f, has 1.38 million folllowers.

“These repeated bannings have not even made a dent in its reach, and I think Turkish courts have even given up trying to ban it. Try to to stop a leak, you have to find the leaker. Banning their Twitter account just doesn’t make sense, either strategically or tactically,” Tufekci says.