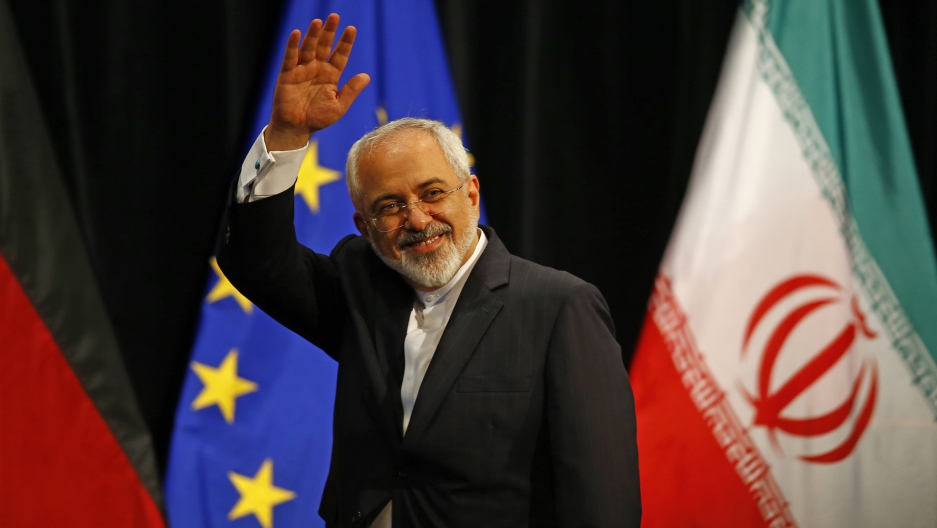 Finally, a deal. Of historic proportions.

The cliff-notes version goes something like this. Iran accepts restrictions on its nuclear program. And in return, the country gets relief from economic sanctions.

"This deal meets every one of the bottom lines we established when we achieved a framework earlier this spring," Obama said. "Every pathway to a nuclear weapon is cut off. And the inspection and transparency regime necessary to verify that objective will be put in place."

Obama's statement was broadcast on live TV in Iran today. Iranians also heard from their president, Hassan Rouhani, who said the agreement shouldn't be viewed as a "win-lose" proposition.

"Negotiations and agreements can only be a stable which will be win and win for both parties," Rouhani said.

Of course, not everyone is sold on the wisdom of this deal. Obama and Rouhani both face plenty of skepticism at home. And then there's America's most important Middle East ally, Israel.

But first, it's important to get an overview of the agreement.

Slavin says the symbolism of this hard-fought diplomatic breakthrough is important. "[This is an] agreement between the international community and Iran; and between the United States and Iran, which although they haven’t had diplomatic relations for 35, 36 years, [they] have spent the great part of last two years negotiating this deal," she says.

Still, Slavin says the critics are probably right to be skeptical. In fact, she adds, all of us should be skeptical.

“This is an enormously complicated agreement with many moving parts,” she says.

Before the terms of the deal can be implemented, the US Congress must ratify it. From the moment it is delivered to Congress, lawmakers will have 60 days to review it and approve or reject it.

President Obama says he would veto any legislative action to sabatoge the Iran deal.

“The task before the opponents is to get a sufficient number of votes to override a veto and I think that’s going to be very difficult,” Slavin says.

She adds that the Joint Comprehensive Plan of Action, as the deal is officially named, is not a treaty, but rather an executive agreement.

“It does not require a two-thirds vote in the Senate to ratify it,” Slavin says. And the same thing is true on the Iranian side, she adds.

As things stand now, Slavin, who has followed the Iran-US relations very closely for years, sees this as an historic moment indeed.

She says there are plenty of obstacles ahead. After all, Iranians are still chanting "death to America."

But Slavin says this could be a turning point.

“It is a moment, I think, to sit back, to take a deep breath and simply feel good about the fact that in this violent world, something, something can be resolved peacefully and through diplomacy,” she says.

In the streets of Tehran on Tuesday night, there were celebrations.

But in Israel, there were no celebrations. Far from it.

“The world is a much more dangerous place today than it was yesterday,” Benjamin Netanyahu said in a televised statement. The Israeli prime minister has been opposed to the Obama administration’s diplomatic strategy with regard to Iran. Netanyahu called the agreement announced today a “stunning historic mistake.”

It is too early for final judgment, of course, says Shmuel Rosner, an Israeli editor at The Jewish Journal who is based in Tel Aviv. “But from an Israeli perspective, this is certainly a very problematic day,” Rosner says.

Israel’s government would not have been happy with any international agreement with Iran that fell short of dismantling Iranian nuclear facilities, Rosner says. And this is a view widely shared across the Israeli political spectrum.

For Israel, “an agreement that emboldens Iran without making a serious attempt to curb its support of terrorism in the Middle East is a very problematic prospect,” Rosner says.

But there are security experts in Israel with a more sanguine view, according to a report released by the Israeli think tank Molad. They “hold that the deal would actually reduce the threat posed by Iran, freeing resources to deal with other threats. Conversations with senior security experts indicate that many of them share the view that given the realistic alternatives, the deal is in fact good for Israel’s security.”

Rosner says that doesn’t mean they do not share the same fundamental concerns, though. “[Israeli security officials] do not like the language [from Israeli politicians] that compares this agreement to [ones] ... with Nazi Germany,” Rosner says. “They would like Israel to present a less panicky face when looking at this agreement.”