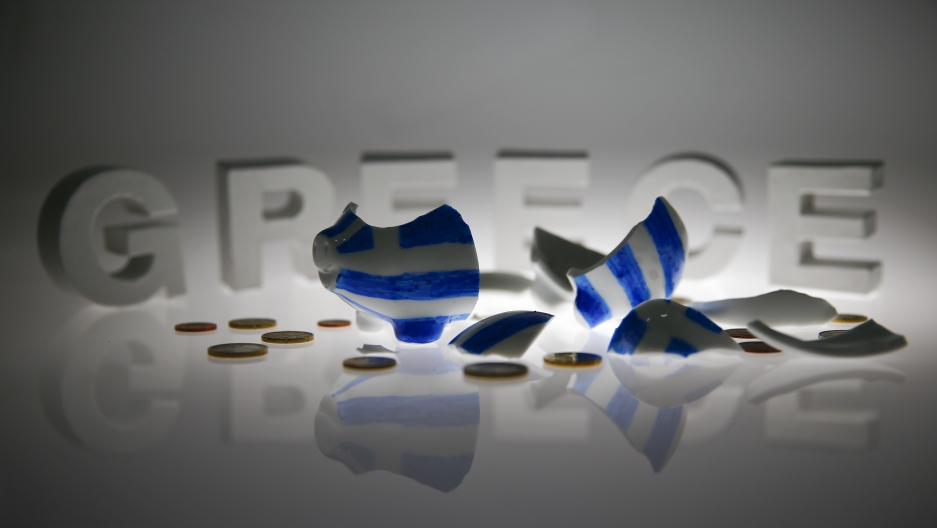 A broken piggybank painted in the colours of the Greek flag lies amongst various euro coins in front of letters spelling the word 'GREECE' in this picture illustration taken in Berlin, Germany June 30, 2015.

In the past week, Greek people have experienced a polarizing national referendum and the closure of banks, while a deadline for a bailout to save Greece from economic collapse looms this weekend.

Nicos Papadakis, a migrant from the Greek island of Crete, has been following the dramatic events from his adopted home in Berlin — the heart of the country that has been Greece’s primary opponent in tense negotiations with the European Union. The leaders of Germany, the EU’s power broker, have been the most vocal critics of Greece’s government. The German media has depicted Greece and Greek people as greedy and lazy and German public opinion polls show the vast majority of Germans reject any more debt concessions to the Greek.

“My father sometimes says to me — ‘Where are you? You are in Berlin, in the mouth of the wolf!'” said the 26-year old Papadakis.

He relocated to Germany in 2011 to study philosophy at Berlin’s Freie Universität, and has been living here since. Papadakis speaks fluent German, teaches at the university while writing his thesis, and has no plans to return to Greece any time soon. He is one of 328,564 Greek citizens who were registered as living in Germany at the end of 2014 — the fourth consecutive year in which the total number of Greeks living in Germany grew.

More than 138,000 Greeks have migrated to Germany since 2009 — the year in which the global financial crisis left the country’s economy in ruins. Greece currently has the highest unemployment rate in the EU (25.6 percent as of May 2015), and is in the midst of a five-year long recession. Germany, on the other hand, has a flouring economy, the lowest unemployment rate in the EU (4.7 percent) and a labor market that craves high-skilled workers, according to the Cologne Institute for Economic Research.

“It became very difficult for people to have a good job, to afford to live there [in Greece],” said Lefteris Arabatzis, a 38-year mechanical engineer, who emigrated from Thessaloniki to Berlin two years ago. “So after one and half years looking for a good job without success, I decided to come here.”

After less than two months of searching, Arabatzis landed a job at a German engineering and construction company. But he misses living in Greece, near his loved ones. Since the crisis intensified last week, he has been constantly communicating online with family and friends back home. He has been aching to be there with them — to be part of the huge demonstrations, to cast his vote in the referendum — but flights were too expensive.

Arabatzis firmly opposes the austerity policies that the EU — led by German Chancellor Angela Merkel and Finance Minister Wolfgang Schäuble — has imposed on Greece. He believes the landslide "No" vote in last Sunday’s referendum is the first step toward Greece’s economic recovery. “It opens an opportunity to get rid of the austerity politics and to build up again the society which was broken down all these years,” he said.

The mass migration of highly educated Greek professionals, like Papadakis and Arabatzis, causes a slowdown in productivity, and hurts Greece’s chances of recovering from its financial crisis, according to Henning Vöpel, a professor at the Hamburg Institute of International Economics.

“Right now the impact is not that huge,” Vöpel explained. “But if the crisis will go on, and if Greece would be pushed to exit the eurozone the crisis may get much worse than today, then I think more and more people — and again, those who are especially highly educated — will decide to leave the country and this would harm the Greek economy a lot.”

Vöpel said Greece is experiencing a “brain drain,” and so are other economically struggling eurozone countries, like Spain and Italy. For Germany, this incoming migration plays an important role in growing an already successful local economy, according to Sebastian Dullien, senior policy fellow at the European Council on Foreign Relations, an international think-tank.

“This is the kind of migration that Germany wants,” said the Berlin-based Dullien. “Our experience is quite good with migration of people from the rest of western and southern Europe — these people integrate well, they are usually not a burden for the social system — so Germany definitely benefits from it.”

Though the German public is generally welcoming of the European migrants, Greeks in particular are at times singled out. Papadakis, the migrant from Crete, recently received a lecture from a middle-aged German man who insisted the blame for Greece’s financial troubles belongs with the country’s government and its “lazy” population. The Greek Berliner did not back down.

“I tried to convince him that it is not a conflict between nations but between classes, and that there are interests in each European society which are the same and we have to fight all together,” Papadakis said. “But he didn't, he couldn't understand what I was trying to express.”

Papadakis is active in the Berlin-branch of Syriza — the ruling party in Greece. He views the referendum results as a victory for Greece and for all working class people in Europe. In Germany, the results of Sunday’s vote were a bit of a shock for the political elite and for the public, according to Kai Arzheimer, a professor of political science at the University of Mainz.

Arzheimer regularly keeps track of opinion polls in Germany. He said the public has no negative sentiments towards Greek people, who are perceived as victims of the situation, but is highly critical of Greece’s leadership.

“Many (Germans) feel that the current (Greek) government, mainly the prime minister (Alexis Tsipras) and the out-going finance minister (Janis Varufakis), are tricksters that have offended the chancellor, and are not serious players,” said Arzheimer. “I think that perception is relatively wide-spread.”

Papadakis and Arabatzis — the migrant from Thessaloniki — both say that even though they have been asked by Germans over and over again to discuss the Greece crisis, they have not experienced significant racism in Germany. They love their life in Berlin, but each of them expressed desire to possibly return home to Greece — if the economic situation there improves.

For now, as Greece faces a final ultimatum on its membership in the eurozone, Greek migrants — like their family members back home and the rest of Greece’s population — are living in a constant state of uncertainty.

“The experience of the economic crisis in Greece made us all not to make very deep plans in the future,” said Arabatzis, adding that he just wanted to live in a country where he could have a good life.