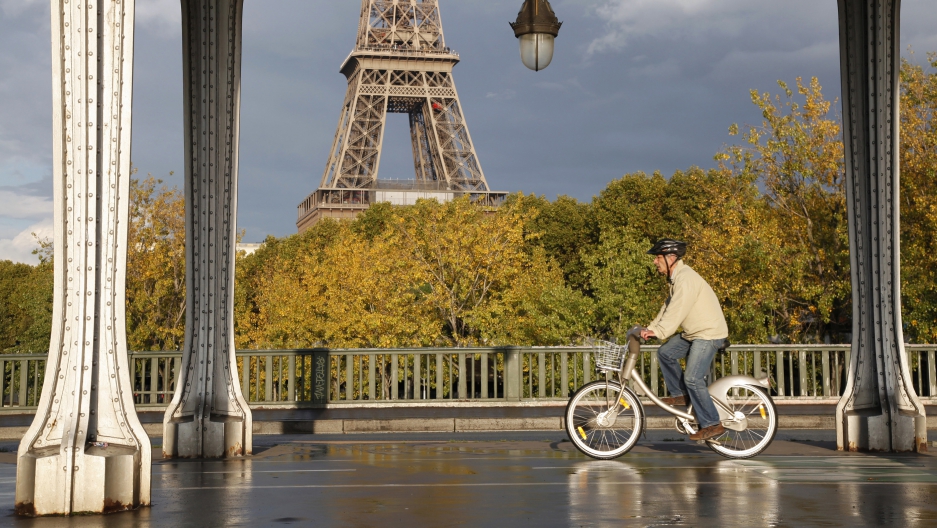 A man rides a Velib self-service public bicycle under an elevated metro line near the the Eiffel Tower after a brief rain shower in Paris October 26, 2013.

The Tour de France is going on right now in France, but the race isn't the only way biking is making news in the City of Light.

Paris is now allowing cyclists to treat stop signs and red lights as if they were yield signs.

I know what you're thinking: Don't cyclists everywhere do this already? Well, maybe, but it's not actually allowed by law in most places.

Here's a quick Q and A about the new law:

Yes. Not everywhere, though, just at selected intersections through the city. Essentially, it's going to allow cyclists to treat red lights like yield signs. The plan has been in the works since 2012. The cool part is this may be the first time Paris is following in the footsteps of Idaho. They've had this policy since 1982. In fact, the term for having bikes treat a stop light like a yield sign is known in planning circles as an "Idaho Stop." So yeah, the city of lights is totally riding the coattails of the gem state.

An illustrative look at how the new bicycling law works. Riders will be able to treat stoplights at selected intersections like yield signs.

How is this safe?

Well, since it was implemented some 30 years ago, Idaho hasn't seen any real increase in bike accidents, injuries or fatalities. Of course, Boise isn't Paris. But France ran a series of "Idaho stop" test-runs in smaller cities like Bordeaux. And just like in Idaho, bike accidents remained about the same. What did change was the number of collisions between bike and cars. They went down.

So this really is all about safefy?

Yes and no. It's part of larger goal in Paris to make cycling more appealing. Riders can carry their momentum and get to places in the city faster. Paris wants to triple its number of cyclists by 2020. It's ambitious. But it needs to cut down on air pollution. Smog is a big problem in the city. You can smell the car exhaust on the sidewalks. Add in noise pollution and, well, the city should be concerned about it. That's why they're trying to make it easier to bike.

So why stop at bikes and stoplights? Why not just remove stoplights all together?

Good idea. It’s been done. In Amsterdam, they've removed all the stoplights at one busy intersection. In its place they put in a simple rule: North to south traffic has the right of way and east to west traffic has to yield. There are some signs and markers on the streets indicating the rule. But that's it. The rules give people more responsibility. And it works. There are no cars, bikes, or even streetcars, sitting around and waiting to move.