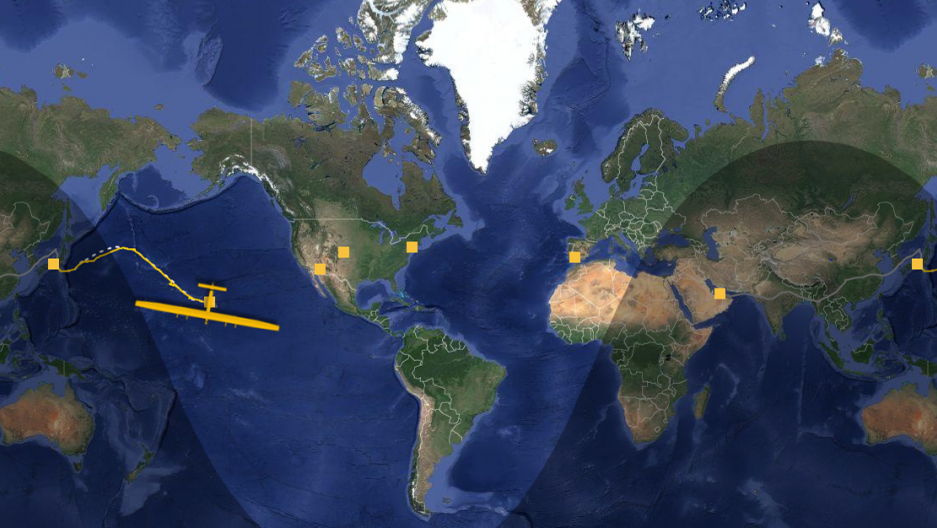 After taking off from Abu Dhabi on March 9, the Solar Impulse 2 has flown across Asia and now more than halfway across the Pacific, with a goal of circumnavigating the world powered only by the 17,000 solar panels on its 236 foot-wide wings.

Not quite, but airlines are moving in that direction.

On Friday, Andre Borschberg, in a plane powered completely by the sun, pushed past Amelia Earhart-esque territory — completing a five-day solo flight across the Pacific, from Japan to Hawaii. It the longest leg on a planned around-the-world trip for the solar-powered plane.

Not only did Borschburg make it, he got a lei around his neck.

"This particular flight is really on the edge of the envelope," MIT aeronautics professor John Hansman says.

Borschberg touched down outside of Honolulu at dawn this morning. At 120 hours, it was the longest solo flight ever. And the plane did it without a drop of fuel. It was powered instead by 17-thousand solar cells mounted on its 236 foot-wide wings.

Borshberg says he himself was also powered through the flight by yoga and meditation.

First thing he says he wants to do now, after five days in the air, is take a shower. And the next stop for Solar Impulse 2 after a layover in Hawaii is Phoenix, Arizona, en route to Abu Dhabi, where the plane first set out on March 9.

Will Solar Impuse 2 inspire a whole fleet of solar planes? Even small planes? Not quite yet, says Hansman, given the power limitations of current solar panels.

However, those panels are improving rapidly. One start: biofuels.

Earlier this week, United Airlines announced it was investing $90 million in a 10-year effort to use jet fuel made from solid waste.