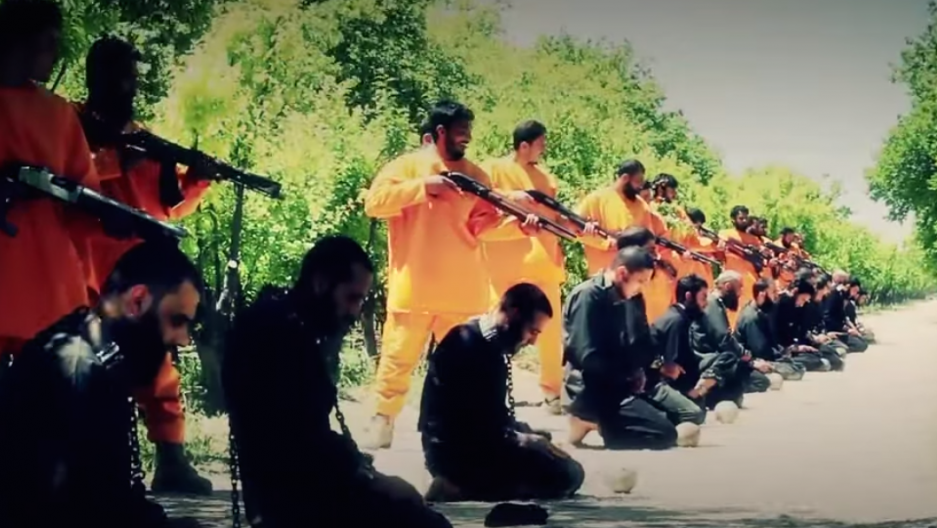 Members of the Syrian rebel group Jaish al-Islam, wearing the orange robes normally worn by victims of the Islamic State (IS), stand over IS fighters about to be executed.
Share

A Syrian rebel group operating around Damascus has executed 18 alleged members of the Islamic State group in a video mimicking the extremist organization's own productions.

The video, which emerged overnight, shows fighters from Jaysh al-Islam (Army of Islam) wearing the orange prison clothes that IS victims often sport. The IS prisoners however are wearing black clothes and chained together wearing ankle and hand shackles with metal balls attached.

The nearly 20-minute production mimics many aspects of IS's own execution videos, with similar sound effects and visuals.

Jaysh al-Islam fighters in the video say the IS forces are being executed in part as revenge for the deaths of at least three of the rebel group's members who were beheaded by IS. The rebel group also refers to a major battle it fought with IS in February. It accuses IS of being allied with President Bashar al-Assad's regime against its fighters and those of other Islamist rebel groups.

The video includes starkly sectarian language, accusing IS of betraying Sunni Muslims and allying with Shiite Muslims and "Nusayris," a derogatory terms for the Alawite sect to which Assad belongs.

It contains lengthy "confessions" from IS fighters who claim that they did not fight against the Syrian army while with IS. The interrogations appear intended to show that IS has focused its fight on other opposition forces, rather than the Syrian government.

The last part of the video shows the 18 IS fighters in black, kneeling before Jaysh al-Islam executioners who shoot them in the head.

The shots are filmed from multiple angles and include gruesome close-up shots.

The Jaish al-Islam video is disgusting, but underscores a still-misunderstood point: #ISIS are seen as mortal enemies by Syrian rebels

The Islamic State group emerged in Syria in 2013, when it sought to merge with Al-Qaeda's local affiliate Al-Nusra Front. But Al-Nusra refused the merger, and IS has since been at odds with the group as well as Islamist and moderate rebels.

In the area around Damascus, its forces have battled Jaysh al-Islam and other rebel organizations.

Last week, a video emerged showing IS jihadists beheading 12 men from rival groups, among them at least three from Jaysh al-Islam and one from Al-Nusra.