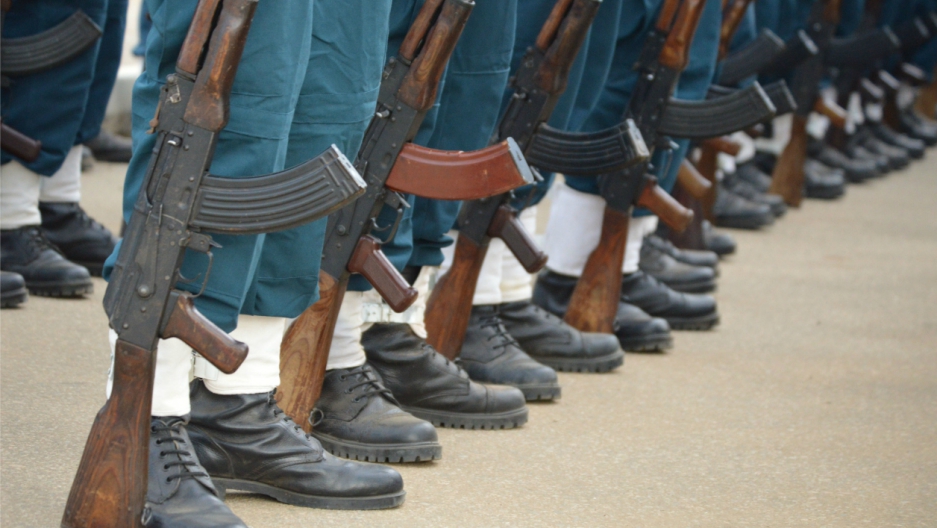 This is a close up of South Sudanese soldiers' rifles during a parade at the John Garang Mausoleum in Juba on July 30, 2014 to celebrate the country's 9th annual Martyrs' Day. The event is held each year to remember the sacrifices made by the two million people who died during the long civil war in Sudan before South Sudan declared its independence.
Credit: SAMIR BOL
Share

Rights investigators from the UN mission in South Sudan (UNMISS) warned of "widespread human rights abuses" including gang-rape and torture in a report based on 115 victims and eyewitnesses from the northern battleground state of Unity, scene of some of the heaviest recent fighting in the 18-month-long civil war.

"Survivors of these attacks reported that SPLA and allied militias from Mayom county carried out a campaign against the local population that killed civilians, looted and destroyed villages and displaced over 100,000 people," the UN said.

"Some of the most disturbing allegations compiled by UNMISS human rights officers focused on the abduction and sexual abuse of women and girls, some of whom were reportedly burnt alive in their dwellings."

Investigators said they had collected at least nine separate incidents where "women and girls were burnt in tukuls (huts) after being gang-raped" as well as scores of cases of sexual violence, which included numerous cases of mothers raped in front of their children.

Others were simply "shot and killed" after being gang-raped, it added.

Photographs in the report seen by AFP show the burnt circles left after huts were set on fire, with all buildings apparently razed to the ground.

One witness described seeing "government forces gang-raping a lactating mother after tossing her baby aside," the report read, another described how troops made a women squeeze "burning-red coals" in her hands to reveal the whereabouts of rebels or cattle.

Rebel forces have also been accused of carrying out atrocities, including rape, killings and, like the government, the recruitment of armies of child soldiers.

There was no immediate response from the army, who has previously dismissed allegations of rights abuses. The UN said the report had been handed to government officials, who were yet to comment on its findings.

The UN said they had tried to visit the sites of the atrocities described by witnesses, but were "routinely denied access" by the army, but that they had corroborated reports from several sources.

"Revealing the truth of what happened offers the best hope for ensuring accountability for such terrible violence and ending the cycle of impunity that allows these abuses to continue," she said.

Civil war began in December 2013 when President Salva Kiir accused his former deputy Riek Machar of planning a coup, setting off a cycle of retaliatory killings that have split the poverty-stricken, landlocked country along ethnic lines.

The upsurge in fighting "has not only been marked by allegations of killing, rape, abduction, looting, arson and displacement, but by a new brutality and intensity," the UN statement added.

"The scope and level of cruelty that has characterized the reports suggests a depth of antipathy that exceeds political differences."

The UN children's agency said in a report earlier this month that warring forces have carried out horrific crimes against children, including castration, rape and tying them together before slitting their throats.

Four years since South Sudan won its independence, two-thirds of the country's 12 million people need aid, according to the UN, and one-sixth have fled their homes.

Kiir and Machar met over the weekend in the Kenyan capital Nairobi for the latest push to strike a peace deal, but rebel spokesman Mabior Garang said they "failed to bear any tangible results".

At least seven ceasefires have been signed and broken during successive rounds of bad-faith talks.

Even as the Nairobi talks were underway, a key regional capital in South Sudan reportedly changed hands once again as a renegade tribal warlord attacked the town of Malakal and declared his allegiance to Machar's rebels.

A rebel statement said that ex-government general Johnson Olony — accused by aid agencies of forcibly recruiting hundreds of child soldiers — was in "full control" of the ruined town of Malakal, the state capital of Upper Nile, but the army dismissed the claim.