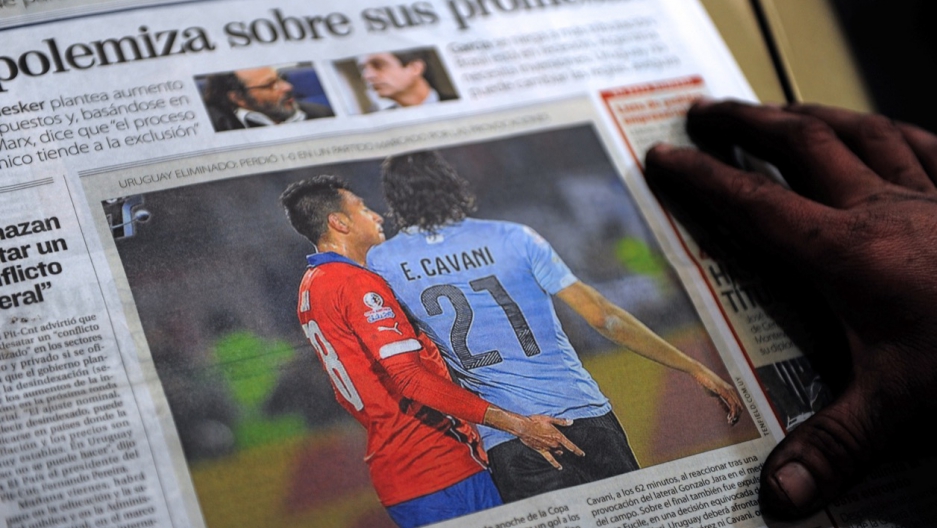 Players and coaches lined up to condemn Chilean defender Gonzalo Jara Thursday after he apparently attempted to shove his finger in an opponent's backside during the stormy Copa America quarter-final win over Uruguay.

Jara was the subject of widespread revulsion on social media after photos and camera footage clearly showed him jabbing a finger into the back of Edinson Cavani's shorts during Wednesday's game, won 1-0 by Chile.

The lurid provocation ultimately led to Cavani being sent off after the Paris St-Germain flicked a retaliatory hand into Jara's face.

More from GlobalPost: Diego Maradona is a soccer god. Here's why he’d be a terrible FIFA president

Jara's fate remained uncertain on Thursday, with South American football's governing body CONMEBOL saying they would only lodge a disciplinary case against the Chilean if they received a formal complaint.

But players and coaches were unanimous in their disgust of the incident, with many expressing sympathy for Cavani, whose father was arrested earlier this week for his part in a fatal traffic accident.

"Particularly when you consider it was Cavani, and all the other problems he's had this week, it was shameful," Argentina coach Gerardo Martino said.

"There is absolutely no justification for it whatsoever. And on top of all that, Cavani barely touched him," Martino added.

Colombia coach Jose Pekerman also decried Jara's actions, saying the move had tarnished the image of the sport in front of a global audience.

"We all want to win and there is pressure on everyone to win, but the contest has to be noble," the veteran Argentine-born coach said.

"Football is a sport that the whole world watches. There are certain rules that must be respected."

Uruguay coach Oscar Tabarez could not hide his anger at the incident in the aftermath of Wednesday's game, which saw his team finish with nine men.

"You can see what happened and what the challenge was. I refer you to the television and photos of it, it is all there," said Tabarez.

"I can see that the referee has not seen it, but the linesman had to be able to see it from his position."

Meanwhile former Uruguay captain Diego Lugano had a menacing warning for Jara in a message on Twitter, while berating the performance of Brazilian referee Sandro Ricci.

"I'll have to speak to that little Jara character when we bump into each other one day!" the former West Bromwich Albion defender said.

But Chilean papers largely underplayed or ignored it, focusing instead on Chile's victory and their passage to the semi-finals as they chase a first ever Copa America crown.

Chilean President Michelle Bachelet declined to comment on the Jara incident as she attended a visit to the Copa America stadium in Concepcion, which will host Saturday's quarter-final between Brazil and Paraguay.