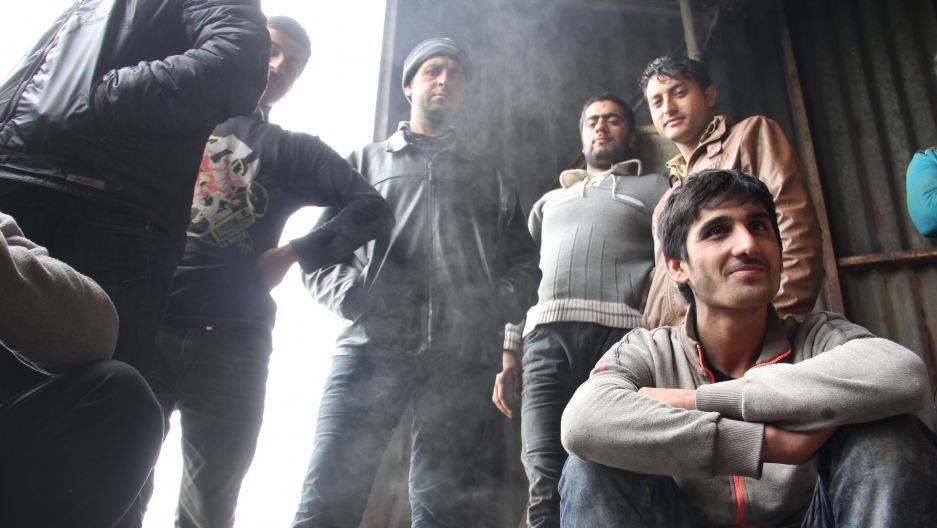 Afghan migrants who travelled through Bulgaria by GPS with Khodar Jindo and his family gather around a fire at an abandoned brick factory near the Serbian-Hungarian border.

When Khodar Jindo and his family fled Syria, like many other refugees, they had their sights set on northern Europe. After nine months in Turkey, they decide to make their journey.

They paid a smuggler thousands of dollars. He said he would take them all the way to Germany, but somewhere in the remote forests near the Turkish-Bulgarian border he abandoned them.

“Without the GPS, we would have died in Bulgaria,” say Kohdar.

Khodar and his family were stranded with a group of other migrants.

Together they walked for two weeks guided by the GPS in their smartphones — and eventually they found their way through Bulgaria and into Serbia and on to this abandoned brick factory near Serbia’s border with Hungary.

For hundreds of Syrians, Iraqis, Afghanis, Pakistanis and Eritreans this is now the last stop before they make their final push into the EU. 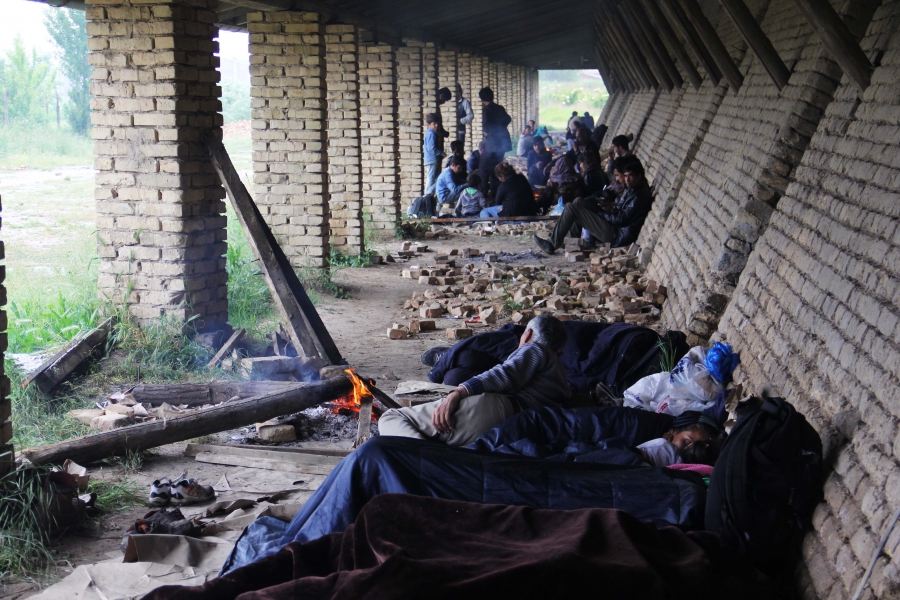 Migrants from Syria, Iraq, Afghanistan, Pakistan and Eritrea seek refuge at an abandoned brick factory near the Serbian-Hungarian border.

For decades, migrants and asylum seekers fleeing Africa and the Middle East have had their sights set on Europe. Some are smuggled in the back of trucks, on trains or by foot. Others risk the dangerous sea crossing of the central Mediterranean.

But this year alone at least 1,500 migrants and asylum seekers have died trying to cross the Mediterranean Sea — most from Libya, bound for Italy.

As the perils of this popular sea route become more clear, an increasing number of migrants are opting for a route through the Balkans. In May alone, 10,000 migrants were detected trying to illegally cross the Serbian-Hungarian border, a tenfold increase from last year. Many more crossed undetected.

On this land route, migrants risk another danger: exploitation and kidnapping. They tell tales of being locked in houses in Macedonia by traffickers, and lied to, stolen from and abandoned by the smugglers they paid to take them to safety.

So, many are choosing DIY smuggling. With smartphones in hand, they are guiding themselves in to Europe. 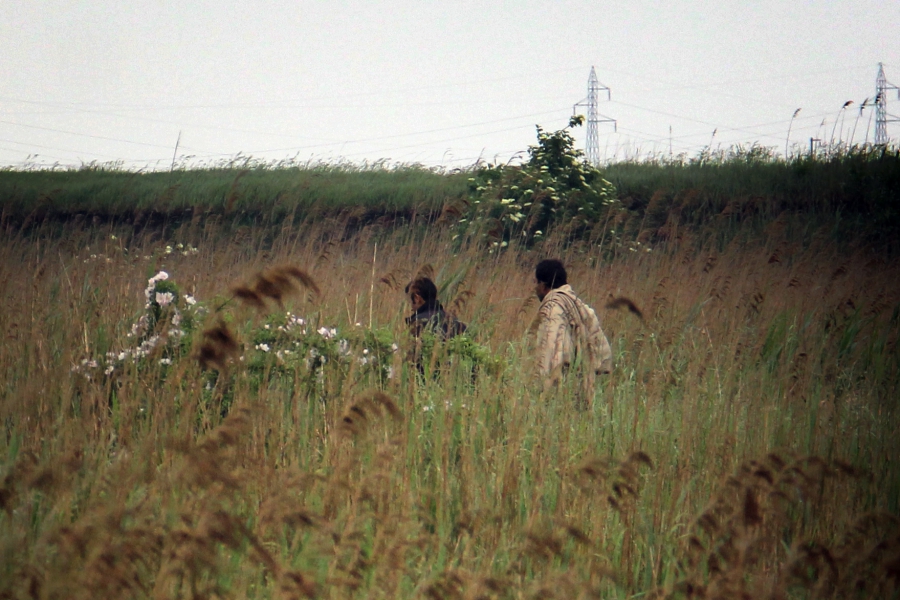 Migrants walk through a field near the Serbian-Hungarian border.

Abu Hassan and his family fled Syria two months ago, determined to reach Munich. They sold everything they owned and paid smugglers to take them on the short boat trip to Greece, and then paid thousands of more dollars to be smuggled on to Germany. But instead, the smugglers dropped them in Macedonia near the Serbian border.

“They said ‘there’s Serbia, go,'” says Abu Hassan. They were caught by Serbian police but released, and quickly headed north.

Camping in a park in Belgrade, they debated their options for crossing the Serbian-Hungarian border — their last barrier to the EU. They were scared of being robbed again and decided to go it alone.

The day after we met in the park, Abu Hassan sent me a voice message saying he was heading to the border. Days later, another message told me they reached Germany.

He also sent me a video sent to him by another Syrian.

The video is a step-by-step guide to sneaking across the Serbian-Hungarian border. The video shows a Google Map and a voice instructs the migrants to walk between a river and the road. It tells them to move quickly through the populated areas and no matter what happens, stay hidden until 6:30 a.m., before getting a taxi on to Budapest. 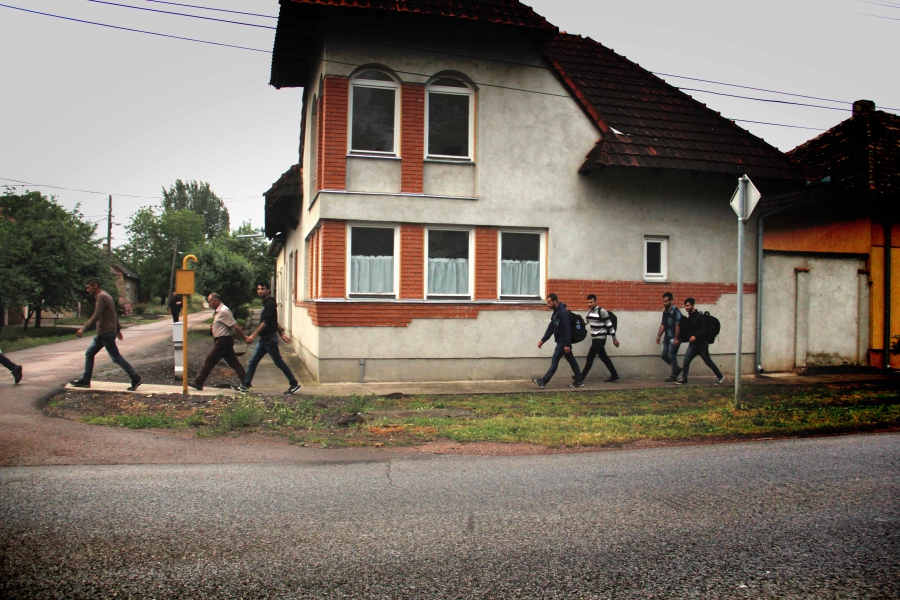 Syrian migrants move quickly through a populated area of a Serbian village in route to the Hungarian border.

He followed this route exactly, he says.

Back near the Serbian-Hungarian border, migrants gathered in a park. A group of 10 or so huddled together speaking in Arabic. Some were Syrians, other were Yazdis who fled ISIS during an attack on Mount Sinjar. They got nervous and asked me to turn off the microphone.

They were planning to take the same route as Abu Hassan.

Within minutes, they were following in his tracks, walking quickly, as instructed, through the populated areas toward the forest by the river.

That night I saw dozens of migrants, in groups, follow the same route, most under the cover of darkness. Routes like this can go viral. 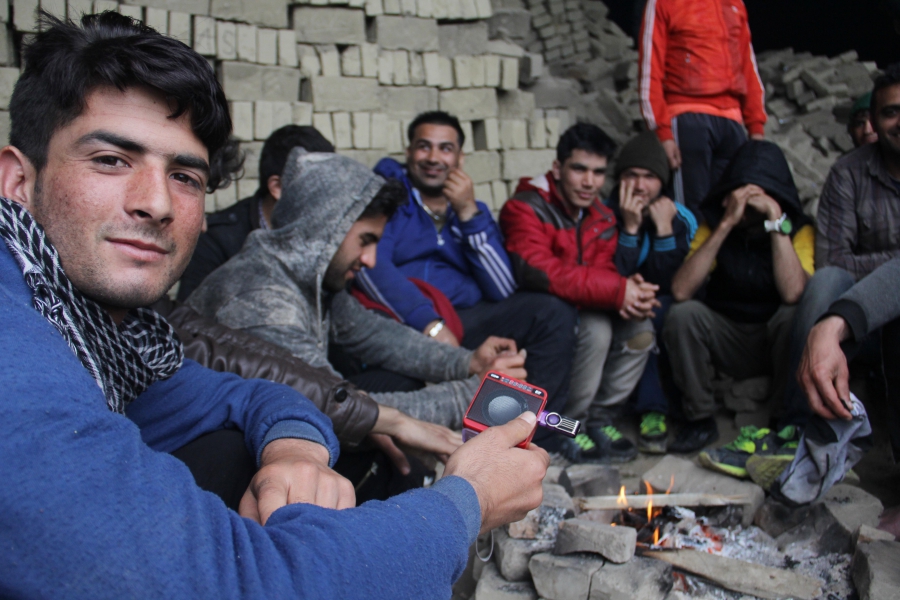 An Afghani migrant plays music from a memory stick on a small speaker where he is camping in an abandoned brick factory near the Serbian-Hungarian border.

But the smartphone is unlikely to replace the smuggler completely. Some migrants say they believe using their phones will let police catch them. Others pay for different routes smugglers tell them are safer.

The next night, Hungarian police arrested 379 migrants a few miles from the border. Many of those who are caught are sent back to Serbia and they simply try again, smartphones in hand.