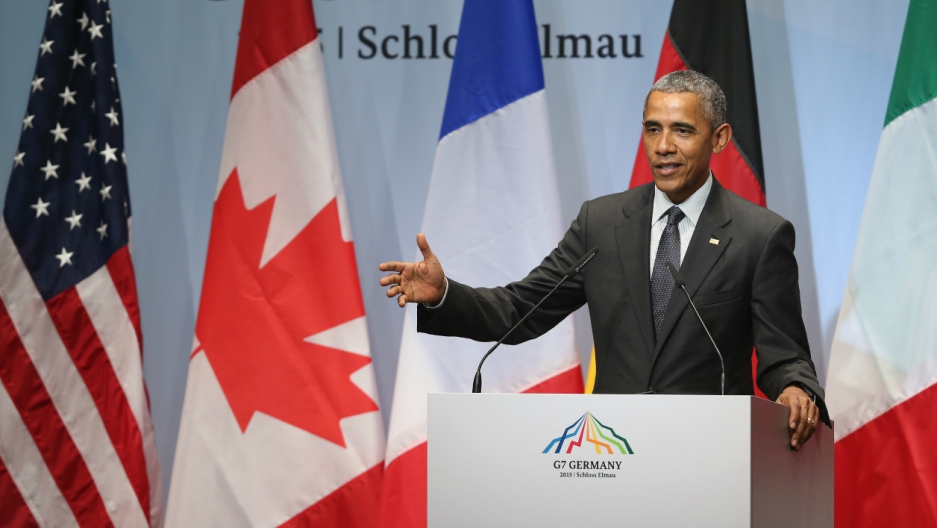 President Barack Obama speaks to the media at the conclusion of the summit of G7 nations at Schloss Elmau on June 8, 2015.
Credit: Sean Gallup
Share

KRUEN, Germany — President Barack Obama, reprising a phrase that caused uproar in Washington last year, said on Monday the United States does not yet have a "complete strategy" for training Iraqi security forces to reconquer territory seized by Islamic State fighters.

Speaking to reporters after meeting Iraqi Prime Minister Haider al-Abadi on the sidelines of a Group of Seven (G7) nations summit in Germany, Obama said more progress was needed to stem the flow of foreign fighters into Syria and Iraq.

All countries in an international coalition waging an air campaign against the Sunni Islamist militants were ready to do more to train Iraqi security forces if that would help.

"We want to get more Iraqi security forces trained, fresh, well-equipped and focused and (Prime Minister) Abadi wants the same thing so we're reviewing a range of plans for how we might do that," Obama told a news conference.

"We don't yet have a complete strategy because it requires commitments on the part of the Iraqis as well about how recruitment takes place, how that training takes place and so the details of that are not yet worked out."

Obama was flayed by domestic critics last September after saying "we don't have a strategy yet" to combat IS fighters in Syria after they beheaded a US journalist on camera.

Western strategy in Iraq has come under fire again in recent weeks after Islamic State militants captured the city of Ramadi despite coalition air strikes designed to halt their advance and reverse their gains. Witnesses said Iraqi government forces abandoned their arms and fled.

However Obama and Abadi both said at their meeting they were confident that Islamic State's success in Ramadi would be just a short-term tactical gain.

Abadi said Iraq and its allies had won many rounds against IS and the loss in Ramadi was only temporary. He urged the international community to help prevent the militants from profiting from oil smuggling.

Obama deflected questions about sending U.S. ground troops back into Iraq, focusing instead on training Iraqi forces. Iranian Revolutionary Guards and Iraqi Shi'ite militias trained and supported by Tehran have joined Iraqi government forces in the fight against the militants.

British Prime Minister David Cameron, speaking at a separate news conference after the G7 session, said Britain would also expand a military training mission in Iraq in the coming weeks.

The United States and Britain were the main powers that invaded Iraq in 2003 to overthrow President Saddam Hussein, leading to prolonged civil conflict and a withdrawal that inflamed public opinion in both countries.

A US official, speaking on condition of anonymity, said Obama's comments did not signal that he was planning a major overhaul of US strategy in Iraq.

"He was speaking about how to accelerate and optimize the training and equipping of Iraqi forces, including integration of Sunni fighters, not overall strategy to fight ISIL nor the intended purpose of the training mission, which is to enable local ground forces take the fight to ISIL backed by coalition air power," the official said.

In Washington, the speaker of Iraq’s parliament, Saleem al-Jabouri, called on the United States and its allies to increase the pace of air strikes against Islamic State, and said Sunni tribes fighting the group in western Anbar province were not getting sufficient weaponry.

"First of all, increase the number of aerial sorties in a very clear way," Jabouri, who was due to meet US Vice President Joe Biden, told a small group of reporters.

Despite recent pledges by the Obama administration to speed weapons to the Sunnis in Anbar, via the central government in Baghdad, the flow is still insufficient, he said. "The level of armaments does not really correspond to the challenge that the province is facing," Jabouri said.

(By Jeff Mason; Additional reporting by Noah Barkin and Andrew Osborn in Kruen, Warren Strobel in Washington and Philip Stewart in Jerusalem; Writing by Paul Taylor; Editing by Andrew Roche)