A quadrilateral is a four-sided polygon with two parallel side. Article 5 of Nepal's constitution states: "The national flag of Nepal, as handed down by tradition, consists of two juxtaposed triangular figures with a crimson-coloured base and deep blue borders, there being a white emblem of the crescent moon with eight rays visible out of sixteen in the upper part and a white emblem of a twelve-rayed sun in the lower part." Schedule 1 of the constitution provides exhaustive instructions on how to draw the flag. Here's just one of five steps needed to draw the border.

"From A draw a line AC perpendicular to AB making AC equal to AB plus one third AB. From AC mark off D making line AD equal to line AB. Join BD."

"You really have to brush up on your geometry in order to be able to draw it from the description," says Graham Bartram, the chief vexillologist of The Flag Institute, a British non-profit devoted to the scientific and scholarly study of flags. Vexillology, by the way, is the "scientific study of the history, symbolism and usage of flags".

Bartram describes the shape of Nepal's flag as two pennants on top of each other and says the pennant triangle is a traditional shape for flags in South Asia.  If so, then why is Nepal the only country in the entire world with the pennant shape for its national flag?

"It's more a case of the rest of the world copied Europe and Nepal decided not to," says Bartram, who is British. "Europe chose rectangular flags because that's what we came up with and we came up with national flags before the rest of the world had them. And they all sort of said, 'Oh, in order to be a national flag you have to be rectangular' and Nepal said, 'No actually we're quite happy with our traditionally shaped flags.' Hindu flags are triangular. So is the Sikh khanda flag. Triangular flags are very culturally normal in that part of the world." 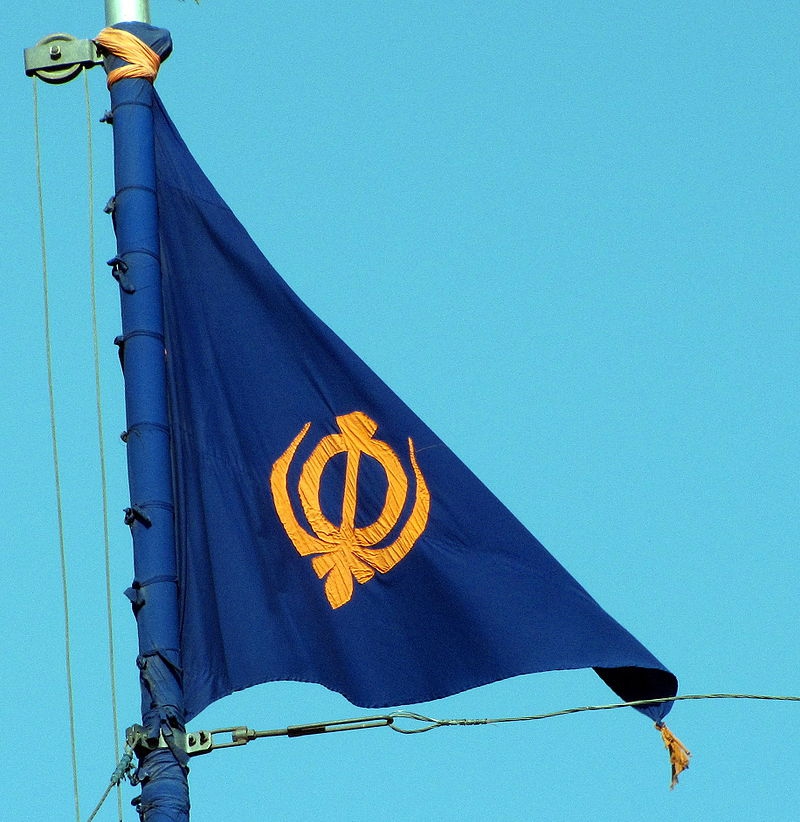 This Sikh flag, called the Nishan Sahib, is a another triangular flag from South Asia. It's made of cotton or silk cloth, with a tassel at its end. The word Nishan means symbol, and the flag is hoisted on a tall flagpole, outside most Gurdwaras, the place of worship for Sikhs.

The colors and symbols of Nepal's national flag have specific meanings. The flag is red with a blue border. "The flag is basically red, with a blue border. Red is Nepal's national color and it's said to come from the Rhododendron plant, which grows in the Himalayas. And blue is meant to represent peace. And on the top pennant you have the moon. And on the bottom pennant you have the sun."

In the United States, there's a very specific way to fold the American flag. In Nepal, it's not clear — but flag expert Graham Bartram thinks there's a good chance they do like the British do and just roll it up into a tube.