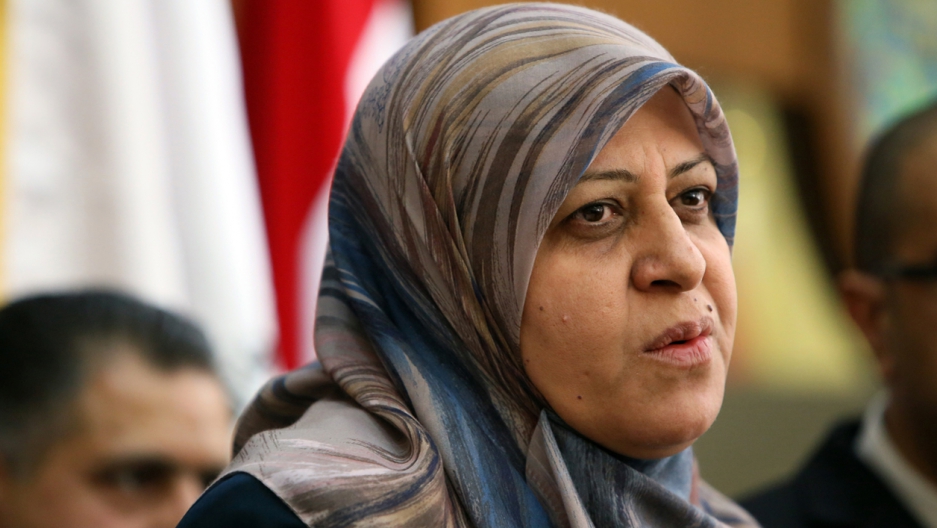 Iraq Health Minister Adila Hammoud speaks during a press conference about the exhumation of the remains of 470 people believed to have been executed by the Islamic State (IS) near Tikrit last year in what is known as the Speicher massacre.
Credit: Ali al-Saadi
Share

Iraq has exhumed the remains of 470 people believed to have been executed by jihadists near Tikrit last year in what is known as the Speicher massacre, the health minister said Thursday.

"We have exhumed the bodies of 470 Speicher martyrs from burial sites in Tikrit," Adila Hammoud said at a press conference in Baghdad.

In June 2014, armed men belonging or allied to the Islamic State group abducted hundreds of young, mostly Shiite recruits from Speicher military base, just outside the city of Tikrit.

They were then lined up in several locations and executed one by one, as shown in pictures and footage later released by IS.

Some were pushed into the Tigris river, others hastily buried in locations that were discovered when government and allied forces retook Tikrit from the jihadists about two months ago.

The highest estimate for the number of people killed in one of the worst atrocities committed by IS stands at 1,700.

"There were several layers of bodies all piled on top of each other," he said, adding that 50 bodies were found in a second site and nine more in the two remaining graves.

He said forensic examination of the remains was conducted with foreign assistance, including from the International Committee of the Red Cross. Iraqi fighters from the Shiite popular mobilization unit walk past a damaged vehicle in the outskirts of Baiji refinery north of Tikrit during a joint operation with the Iraqi army to retake the remaining area of the oil refinery from the Islamic State (IS), on May 25, 2015.

Hundreds of families whose sons, fathers and brothers went missing at the time of the IS-led offensive in Iraq have been waiting for confirmation that their loved ones were among the Speicher victims.

Officials at Thursday's press conference said the first list of names would be released next week, after weeks of DNA testing.

Identification documents the victims were carrying at the time of their capture were also found near burial sites.

The health minister said the figure of 470 was not final.

Abbas said there were only 20 sufficiently qualified forensic scientists in Iraq, Kurdistan not included, capable of contributing to the investigation.

Officials had said in mid-April that up to 10 different suspected burial sites were identified in the Tikrit area as a result of its recapture by government forces in late March and the first days of April.

Combined with a call by the country's top Shiite cleric Grand Ayatollah Ali al-Sistani for Iraqis to take up arms against them, the Speicher massacre played a key role in the mass recruitment of Shiite volunteers to fight the jihadists.

One of the spots where the Speicher cadets were executed is a police building in the sprawling Tikrit palace complex former president Saddam Hussein built in his hometown.

The quay where the victims were shot in the head and pushed into the Tigris has, since Tikrit was retaken, been turned into an improvised shrine.

Relatives, many of whom may never have a body to bury, have streamed to the site over the past two months along with fighters, delegations of officials, students and others.