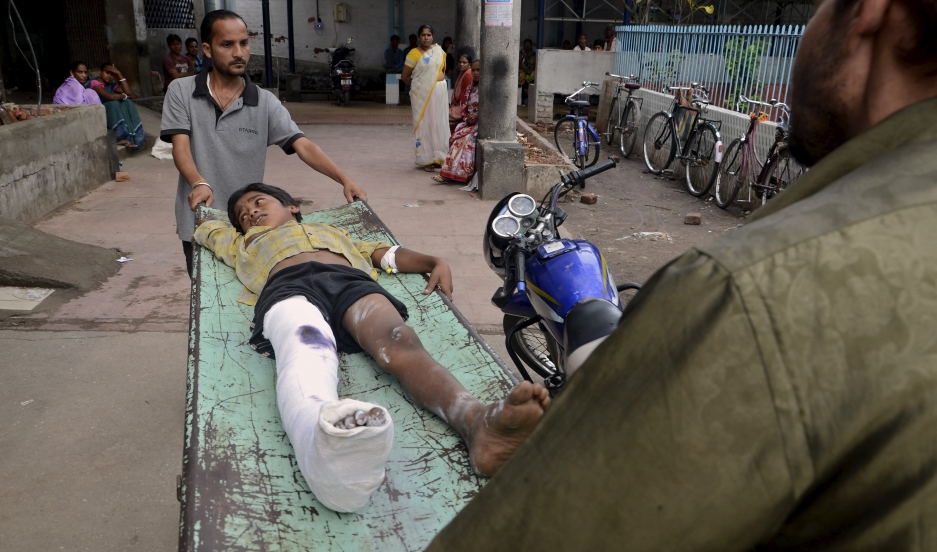 An injured boy is taken to a ward inside a hospital after an earthquake in Siliguri.

As images of devastation and tragedy in Nepal and neighboring countries rattled by a series of quakes since April 25 pour across social media and TV, the natural question for many people is, "What can I do to help?"

After disasters, the best way to help is generally to donate money to effective and efficient charities that have an established presence on the ground. Charity Navigator is one of the leading resources for evaluating the work of nonprofits, and the organization has posted a list of highly-ranked charities that have mounted relief operations in the aftermath of the 7.8 magnitude temblor on April 25 that originated outside the capital, Kathmandu.

A series of aftershocks have followed, including a 7.3 magnitude quake on Tuesday, with an epicenter near Mount Everest.

Photos from the Nepal earthquake

Nearly half a million in Nepal are displaced from their homes; more than 5,000 dead

Here are 10 nonprofits that say they will provide relief in Nepal and that have received either a three- or four-star rating (out of a possible four) from Charity Navigator.

CARE describes itself as a humanitarian organization fighting global poverty. It has a long-established presence in Nepal, and told USA Today that it was “coordinating with other agencies to assist up to 75,000 people.”

Catholic Relief Services is the international humanitarian agency of the Catholic Church in the United States. It maintains field offices in Nepal and has started its relief effort by “procuring emergency relief materials such as tarpaulins/shelter kits and water, sanitation and hygiene material."

Hear from a journalist living in Nepal

Direct Relief is a nonprofit that specializes in providing international medical assistance. It is in the process of coordinating with local partners in Nepal and will focus its relief efforts on the “valley around Kathmandu, where medical facilities are overflowing with patients seeking care.”

GlobalGiving is a charity fundraising website that has set up a fund specifically for Nepal relief efforts. The money collected will go to “help first responders meet survivors' immediate needs for food, fuel, clean water, hygiene products, and shelter. Once initial relief work is complete, this fund will transition to support longer-term recovery efforts" run by vetted local organizations, according to a post on the GlobalGiving site.

International Relief Teams is a humanitarian organization that specializes in disaster relief, and also has a four-star rating. They have “ordered a shipment of emergency medicines to be airlifted to Nepal as soon as possible,” as part of their initial response.

Operation USA, an LA-based international relief agency, has had operations in Nepal since the mid-1980s and has a four-star rating on Charity Navigator.

“We are arranging to send replacement equipment to hospitals in Nepal to restore capacity as soon as possible,” Richard Walden, CEO of  Operation USA said in a statement. “Donations, especially bulk in-kind materials from corporate partners, are critical at this time — not only to deliver aid quickly, but also to ensure a long-term commitment to the people of Nepal who face a long and challenging road ahead as they pick up the pieces in the earthquake’s aftermath.”

Save the Children is an international NGO dedicated to promoting children’s rights and providing relief and support to children in developing countries. It has set up a Nepal fund to “protect vulnerable children and provide desperately needed relief to families.” Ten percent of the funds collected will go to prepare for the next disaster.

The Seva Foundation is a US-based nonprofit known for its work treating blindness. It has a long-running presence in Nepal and has set up an emergency relief fund.

World Help is Christian faith based humanitarian organization that works in the developing world, and has a four-star rating on Charity Navigator. According to a post on their site detailing their Nepal Earthquake Disaster Relief, they have a “broad network of partners” and a team on the ground that is focused on delivering urgent aid, including water, food, bedding and medical supplies.

UNICEF, the United Nation program dedicated to helping children in developing countries, is currently “mobilizing an urgent response to meet the needs of children” affected by the disaster, and is working to deliver water purification tablets, hygiene kits and nutrition supplies to those in need.

Oxfam, a confederation of NGOs, currently has “aid workers ... on the ground, preparing to launch a rapid response to ensure food and water reaches” survivors, according to its site.

"We are focusing on providing clean water and sanitation to thousands of those affected," says Lauren Hartnett, the Humanitarian Press Officer for Oxfam America. "These services are vital for basic health and also prevent the potential second crisis of illnesses like cholera and diarrhea."

Handicap International is a four-star charity that works with people with disabilities and vulnerable populations. They maintain a staff of 50 in Nepal and have sent an additional emergency team from their headquarters. Molly Feltner, spokesperson for Handicap International US, said the team will set up units in hospitals and provide post-surgery rehabilitation to injured people, working in collaboration with orthopedic surgeons. They will also provide equipment, such as wheelchairs, crutches, walkers and splints.

“We will make sure patients have food and we will provide psychological counseling,” Felter said.

Their appeal for donations for Nepal can be found here.

American Jewish World Service is a well-known international development and disaster relief organization and a four-star charity. They have set up an earthquake relief fund here. AJWS has been focused on funding first responders on the ground and is providing medical assistance and supplies, such as food, water and tents.

"In subsequent weeks and months, AJWS will focus our efforts on supporting community-based groups aiding survivors, helping to rebuild infrastructure and mitigate the effects of future natural disasters of this magnitude," says Andrew J. Martin, director of media relations for AJWS.

Experts recommend funds to groups working on the ground and advise against traveling there to help.

This is not a comprehensive list of the organizations doing important work in Nepal. If you have other recommendations, share them below. You can use Charity Navigator or GuideStar, another site, to learn more about how a given nonprofit spends the resources it collects.