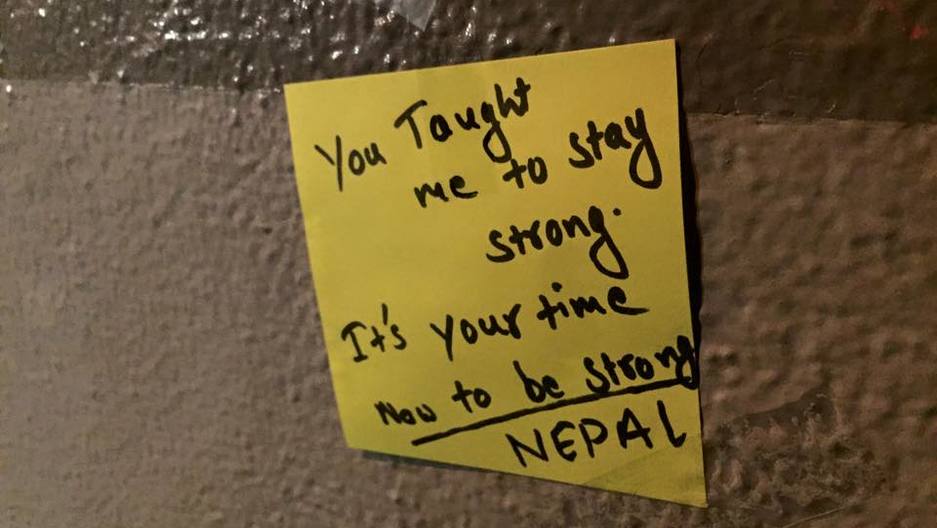 A message of hope at a vigil for victims of the earthquake in Nepal. New York City, April 26, 2015.

Luna Ranjit says if you're thinking of going to Nepal, don't.

It's a tough message for Nepalese immigrants in the US who have family who have been killed or injured in Saturday's earthquake. But it's an important one, she says.

Ranjit, who immigrated from Nepal to attend a university in Iowa in 1996, is the co-founder and executive director of Adhikaar. The organization has been helping immigrants for 10 years in New York City, especially the heavily South Asian neighborhood of Jackson Heights. In their advocacy and community-building work, the organization has created a community that has come together to support each other and their families back in Nepal. The group organized a vigil and other public events to help support their members.

"We have a community center here, where we have weekly classes and workshops. It's sort of a home-away-from-home for our community already," Ranjit says. "When the earthquake hit, it was easier to connect with the existing network."

And Adhikaar used that network to place money into the hands of people who live in Nepal and are organizing to provide medical services and relief. Ranjit joined in a discussion we hosted on Facebook about the best ways to help, and answers some of your questions more in-depth here.

When people ask how to help...

...then the question is where to put that money. Are there any organizations that people in your networks see working, and working well, on the ground?

We don't know yet because we've had few conversations [about that]. With our family members, it's mostly, 'Are you OK?' Most of my other conversations have been with friends who work themselves on the ground.

We [at Adhikaar] are collecting money. We have online petitions, public events and vigils. Our members and supporters who work in stores have put up collection boxes. We are sending those funds to Nepal. We sent the first installment — it's a small amount — to a group that is doing on-the-ground work. These are all volunteer groups, individuals who have come together. These are not organized groups set up to do relief work. They're individuals who are connected to people in the Adhikaar network.

For your group, the tactics are very personal, then?

Yes. These are people I grew up with and have known for many years. Someone is an optometrist, a physician or an entrepreneur — all of them have become volunteers on the ground. That's one of the challenges for us in messaging. Of course there is concern about where the money is going, and there has to be. These are not people with track records, who have a lot of experience doing relief work, but they are on the ground. And they are doing whatever they can with very little support and guidance. These are people I know and trust. They're trying to help their neighbors, but they've gone much beyond helping their neighbors. They're going into the villages. There's a large number of people who are organizing themselves to do work beyond their immediate networks. 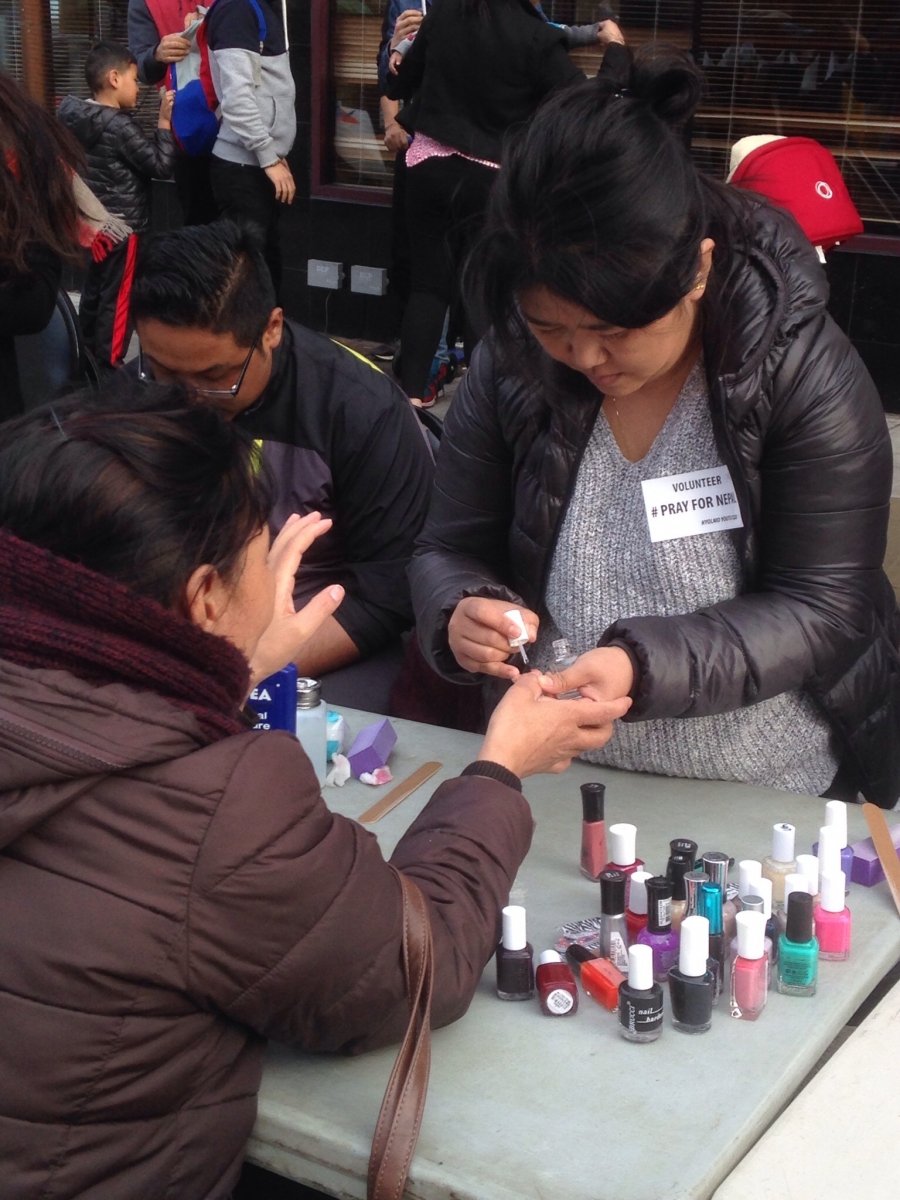 We've gotten some questions from young people, students in high school and universities, who don't have money to give. But they want to help. What do you recommend?

They can raise funds from others. We have a young girl, a Nepali girl in second or third grade, who went door to door in her neighborhood and collected $1000. You don't have to have your own money. Instead of spending time to collect clothes and things not needed in Nepal, and being frustrated about what to do with it, use that time to volunteer. Young people can cut their neighbors' grass and donate that money. We have some young Nepali women who work in nail salons who are painting nails in public spaces and collecting money for earthquake victims. They think creatively.

What about travel? What do you tell Nepalese immigrants about going back?

Unless you are a trained medical professional or someone trained to do relief work, do not travel to Nepal right now.

That must be hard to say to people who have loved ones who have died or are injured.

Definitely. But you won't be able to do much when you are there. You may actually get in the way. It is not an easy decision but it is the right decision. My first instinct was, I wish I was there... but I had to think. I won't be able to lift heavy things, I won't be able to treat people. If I go there and get sick, the doctors will have one more person to take care of.

So instead I am using contacts and networks to raise money, so that the doctors and volunteers who are there will actually be able to do their work.

What about people who want to go to Nepal and help in person? We've seen some people who were planning a vacation in Nepal in the coming weeks, who now want to use their time to help, and people who have specific skills, such as engineering, who want to go.

No. Unless you are trained medical professionals or trained in doing relief work, please do not go. If you are trained, connect with other groups who are taking those who have the expertise. Go with a group and don't just show up. There is a bottleneck at the airport — we have only one international airport — it's been really difficult to handle on the ground there.

Find the most up-to-date information about Adhikaar's relief efforts on their Facebook page. Learn more about donating to victims of the Nepal earthquake through the organization on their website.

Is there anything else you think people should know about helping in the recovery?

If you know Nepalis, offer them help here [in the US.] People are going through a lot. If you have friends or co-workers who are Nepali, or from South Asia — people in Tibet, India and even Bangladesh have also died — provide support. Give emotional support or help them with their laundry, whatever they need.

We are also working on temporary protected status for Nepalis. This is for people who are already here, people who have temporary visas, to be allowed to stay for a few months. There is already a bill in Congress and a letter being sent from congress members to the Department of Homeland Security and the State Department. We are asking people who want to get more involved to call their federal elected officials and ask them to support federal temporary protected status for Nepalis.