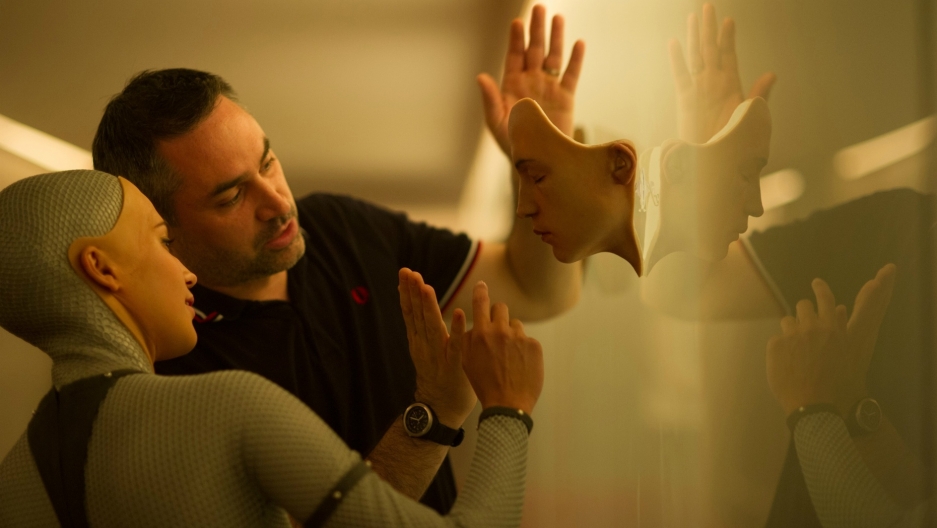 Daniel Landin, Courtesy of A24

The new movie Ex Machina manages to raise questions about the nature of consciousness while also being a pulse-raising thriller. It's about an alpha-male tech CEO, Nathan (Oscar Isaac), who enlists a shy programmer, Caleb (Domhnall Gleeson), in an unusual experiment: Caleb has to subject an artificial intelligence, aka "AI," to a version of the Turing test. In this case, however, the machine isn't just some bot on the internet --- it's Ava (Alicia Vikander), a very human-looking robot. When Ava warns Caleb not to trust Nathan, Caleb has to decide where his loyalty lies.

The writer-director of Ex Machina, Alex Garland, says he and his special effects team spent a long time making sure Ava didn't look like any of the cinematic androids she descends from. "One of the things we discovered was even a little bit of gold in her design made you think of C-3P0, metallic made you think of Metropolis, and white plastic made you think of I, Robot," Garland tells Kurt Andersen. "The first time we see her, I didn't want audiences to be thinking about another movie."

In the film, Caleb finds himself attracted to Ava --- one in a long lineof human-robot romances on film. Garland sees nothing wrong with this sort of attraction, provided the android in question has a consciousness. "The thing we value in each other is our minds," he says. "Could you be attracted to a machine that had an aesthetic form you liked and had a mind? Why not?"

There's no shortage of malevolent AIs in fiction --- think of Hal in 2001or Skynet in the Terminator movies. But in real life, Garland thinks the development of artificial intelligence is inevitable. "The argument is not should we or shouldn't we, but how are we going to deal with it when it does happen," he says. And he's not too worried about our machine overlords. "They might be at some point all of us that survive. We need to get on board with that."