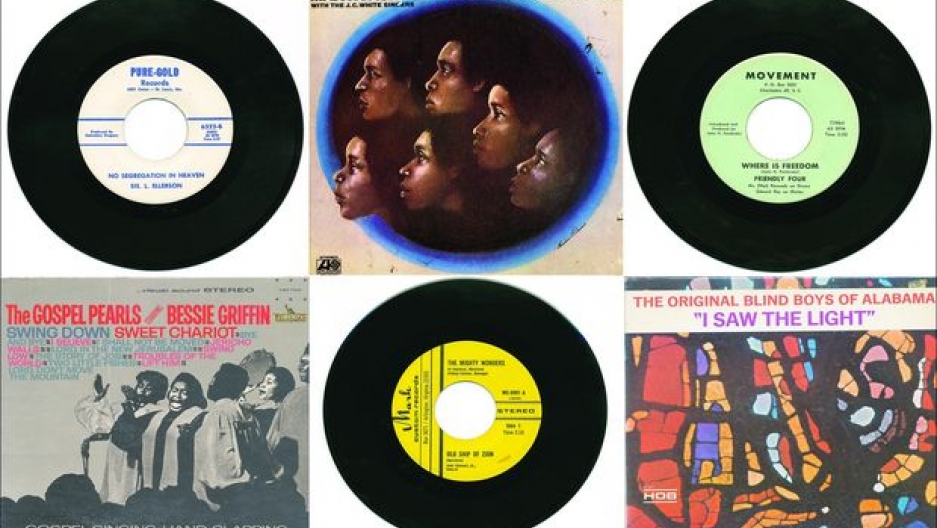 A selection of gospel records and album covers from the 1960s and '70s. Many gospel artists of this era used the B-sides of their 45s for civil rights anthems.

A treasure trove of long-forgotten civil rights era protest music could have been lost forever if one man hadn’t thought to start flipping over old records to see what was on the other side.

The songs commonly associated with the civil rights movement, like “We Shall Overcome,” “Go Tell It on the Mountain" and "A Change Is Gonna Come,” are just a fraction of the politically charged music produced at the time. But out of fear of retribution, many musicians hid perhaps thousands of other protest songs in plain sight, on the B-sides of the small 45 rpm records that were then commonly used to distribute singles.

“Many of the gospel artists, we are just now discovering, used that B-side to give a message of support and hope for the civil rights movement at the time when it was very dangerous to do so,” says Bob Darden, a professor at Baylor University.

Darden has made it his mission to preserve and document this music with Baylor University’s Black Gospel Music Restoration Project, which he founded in 2005. The project has digitized more than 25,000 records, mostly from donated old records, cassette tapes and 8-tracks. They came from people like Ramona Curtis, who donated a collection of LPs.

“The way I grew up, we were singing 'Guide me, O Thou great Jehovah, pilgrim through this barren land,'" she remembers. "These aren't just worship songs. They are stories about struggle, about freedom, about knowing where your help comes from. It's therapeutic. It's so important.”

Forty-fives were the most convenient — and cheapest — way to make and sell music in the ‘60s. There were neighborhood recording studios where anyone from church choirs or teenage bands to aspiring folk singers could record a song or two to put on a 45. The going rate was about $50 for 50 copies. They were the burned CDs or mixtapes of their day, allowing groups to sell music at fundraisers or after shows.

But while the A-sides were given to radio DJs and promoters, the B-sides were largely ignored — unless you knew where to look. Black musicians were right to be wary of how they distributed their political music and who noticed it. They knew they could pay a heavy price if it got into the wrong hands.

“If you had a loan and people found out you were politically active, sometimes the bank would either call for the loan to be paid in full or they would increase your rates,” says Birgitta Johnson, a professor of music at the University of South Carolina. “If they were found to be involved with the Freedom Riders or voting rights, they sometimes were evicted from their homes.”

The Salem Travelers, a gospel group formed in Chicago in the early 60s, was one of the ensembles Darden came across. They performed their song, “Tell It Like It Is,” live on the Chicago TV show "Jubilee Showcase" after Martin Luther King Jr.’s death, and also had a show at the famed Apollo Theatre. Darden found one of their less well-known songs, whose politicized title speaks for itself: “Give Me Liberty or Give me Death.”

According to Johnson, many gospel musicians mixed secular and religious messages, not only to give people hope but to provide a way to speak plainly about the black community's problems.

"Sometimes those words were coded to keep white people from understanding it," Johnson says. "And other times they weren't coded but, because you weren't part of that culture, you wouldn't understand what the singer was saying.”

Of course, black musicians using their songs to relay political messages was not new, and neither was the repression they faced for doing so. But the music allowed musicians to give strength and inspiration to their own community, Johnson says: “Gospel music and the spirituals were one of the few avenues where African Americans had their own voice, where they could say and sing exactly what they were feeling."

This story was made possible with help from ArtsEdge, the digital learning program of the John F. Kennedy Center for the Performing Arts. This story is based on an interview from PRI's Studio 360 with Kurt Andersen.