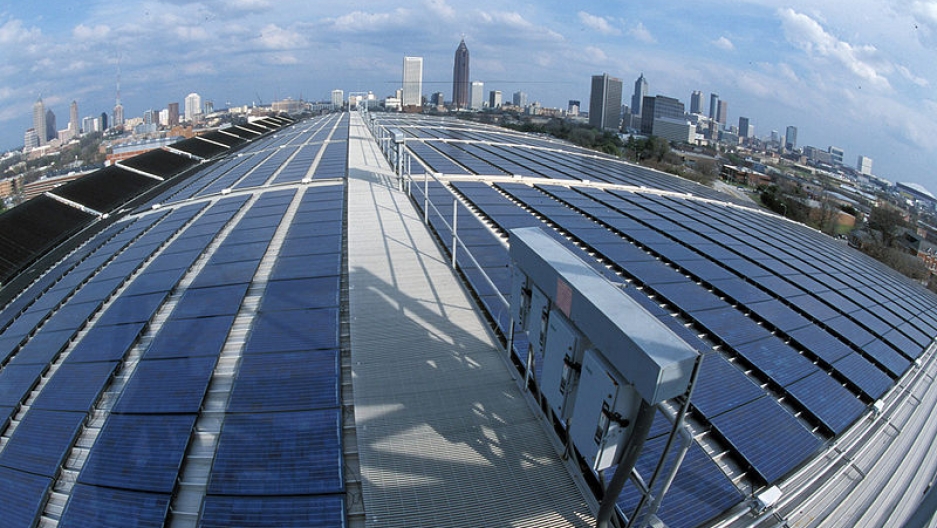 A solar panel on top of the Georgia Tech Aquatic Center. The battle over solar energy in the state has had national implications for the Tea Party.

While the race for the Republican presidential nomination is quickly picking up speed, another contest is underway that could also be decisive for the party’s future — and maybe Earth’s future as well.

It pits two factions of the party's conservative base against each other: a pro-solar energy offshoot of the Tea Party called the Green Tea Coalition versus Americans For Prosperity, a huge conversative advocacy group backed by the Koch brothers.

Debbie Dooley is the founder of the Georgia-based Green Tea Coalition and a national coordinator of the Tea Party Patriots. An early Tea Party organizer, she rose to national prominence in 2013 when she led an effort, backed by the Tea Party Patriots, to require Georgia's state utility company to purchase more electricity from solar providers.

“I'm a staunch, right-wing, radical conservative and I believe — I know this is something many don't agree with — but I believe conservation is a conservative principle,” she says.

Americans for Prosperity opposes renewable energy, and the group's Georgia chapter fought hard — and dirty, Dooley claims — against the solar power proposal. But Dooley’s group and their environmentalist allies won.

A counter-intuitive media narrative was born: This was the green Tea Party, and Dooley was the face of it. She was featured in dozens of publications, and an article about her work appeared in the February issue of the New Yorker.

But her stance in the battle with Georgia Power, the state utility, had nothing to do with climate change; the environment isn’t even part of her message. She sees her pro-solar views as an extension of her belief in limited government and the decentralization of power — in this case, both the figurative and literal kind.

Her view is that government shouldn’t back any energy source with subsidies or restrictive laws; people, and therefore the market, should be able to get their electricity where they choose, be it from the solar panel on their roof or from the local utility company. And when she looks back at the fight in Georgia, she thinks that's a winning message.

“I educated conservatives on the conservative message as far as decentralized energy and solar. And we won that!” she says. 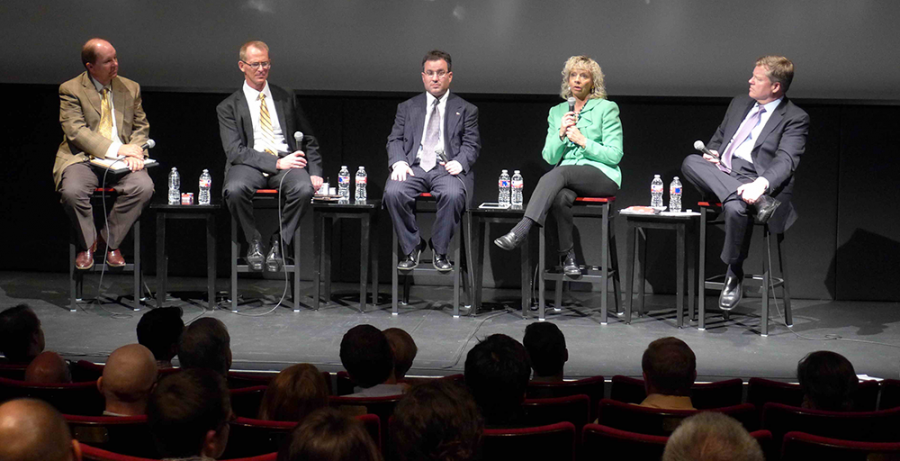 It's now clear that Dooley was on to something. Solar energy can allow a family to transform their home into a self-sufficient power plant with the addition of a few panels on the roof. This appeals to conservative ideals of self-reliance, free from interference from Big Government or even Big Corporations.

Since her success in Georgia, Dooley has taken the show on the road, campaigning in Florida with Floridians for Solar Choice, a once unfathomable alliance of environmentalists and Tea Party groups backing a solar energy ballot measure. The proposal would allow individuals with solar power to sell electricity to their tenants or neighbors, which is currently illegal in the state.

But while the pro-solar elements of the Tea Party are visible, they are hardly ascendant. A summit billed as a "fresh conservative take on energy policy summit" held in Austin last September featured an influential panel of elected officials, lobbyists and activists. About 60 people showed up to hear them.

One of the participants, Kip Averitt, a former Texas Republican state Senator who now heads the Texas Clean Energy Coalition, thinks its a matter of green conservatives reaching critical mass within the party.

“You've got to set our conservatives free,” he says. “You have to tell them it's OK to do the right thing. They have to understand that mom and dad back home are engaged and paying attention to clean energy policy."

Another attendee, Tucker Eskew, a well-respected Republican strategist, is deeply familiar with inter-conservative feuding — he was the one of the people responsible for tutoring Sarlin Palin as a vice presidential candidate during the 2008 race. He thinks that pro-conservation conservatives will have more staying power.

“Do you remember the saying 'I was country before country was cool?'” he says. “Some Republicans picked that up before long and they were conservative before conservative was cool. Maybe, one day, we'll look back on this event and realize we were clean energy conservatives before it was cool.”

This story originally aired on PRI's Living on Earth with Steve Curwood. It was based on an earlier article by Carl Lindemann in The Texas Observer.