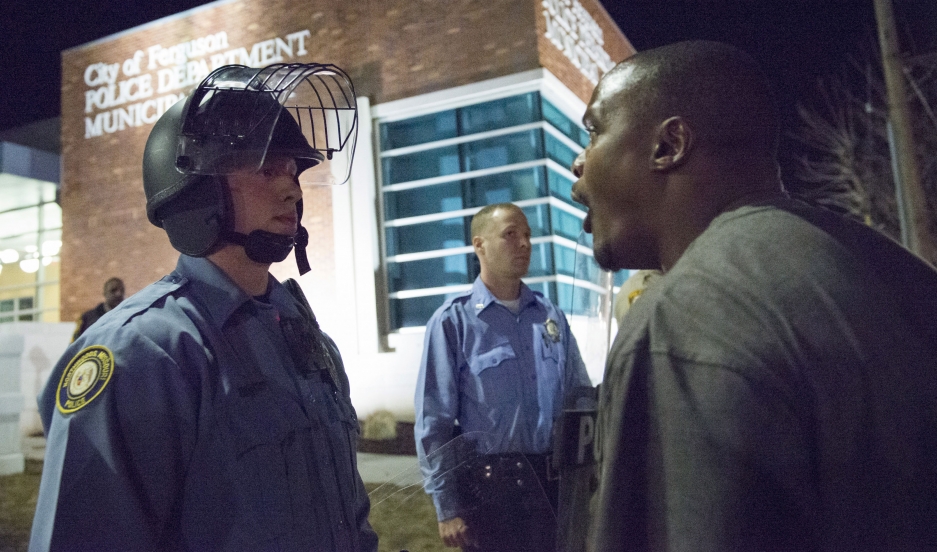 A protester confronts a police officer outside the City of Ferguson Police Department and Municipal Court in Ferguson, Missouri on March 11th. Two police officers were shot during a protest outside the police headquarters early on Thursday, police said, just hours after the city's police chief quit following a damning US Justice Department report into his force.

The question arises with every news story coming out of Ferguson, Missouri: How have race relations gotten this bad?

The latest story is the shooting of two police officers during a demonstration outside of the Ferguson Police Department early Thursday. The two officers are in stable condition and were released from the local hospital. One of the officers was shot in the face — directly under his right eye — and the other officer was shot in the shoulder and the bullet went through his back. Police and witnesses disagreed on whether the shots came from the demonstration or a nearby hill.

Protests, mass arrests, and demonstrations are all-too-common in the St. Louis suburb since the fatal shooting of Michael Brown by police officer Darren Wilson in August. This latest shooting, however, is the first time police have been wounded.

Ansgar Graw, is a Washington-based reporter for the German newspaper Die Welt. He's covered various conflict zones across the globe, from Iraq to the civil war in Georgia. But it was in Ferguson where he was arrested while reporting on the shooting and aftermath. When he heard about the shooting of two police officers on Thursday, he wasn't all that surprised.

"I think it was to be expected, or at least not coming totally out of the blue, that in this atmosphere of violence and escalation over the months that some troublemaker in the background would use firearms and escalate this even more," Graw says. He says his time reporting in Ferguson as a foreigner did shed light on race relations in the US. "I think we could see last summer that this debate about racism, about racial bias is not a discussion about historic events. In some parts of the country it's still a problem, and you have to deal with it."

Here are a few of the events that led up to Wednesday's shooting:

August 9, 2014: Michael Brown, 18, is shot and killed by a 28 year-old officer, Darren Wilson. Wilson fires his weapon 12 times, and six bullets strike Brown. Police had notified that Brown and his friend Dorian Johnson were in a local convenience store where Brown stole some cigarettes. After the slaying, Brown's body lays in the street for approximately four hours, according to witnesses and the local coroner.

August 10, 2014: St. Louis County police chief, Jon Belmar, holds a press conference and announces that St. Louis County will conduct an independent investigation and turn their materials to County Prosecuting Attorney Robert P. McCulloch to assess whether charges should be filed against Wilson. Wilson also is put on administrative leave.

August 11, 2014: The FBI opens a separate, federal investigation into possible the civil right violations in the shooting. That same day, there were protests, reports of looting and many businesses were set on fire and damaged by protesters.

August 20, 2014: The grand jury begins to hear evidence and testimony to decide whether to indict Wilson in the Brown shooting. Members of the grand jury included, “a diverse group of citizens — black, white, male, female, age differences and from different parts of the county,” according to Ed Magee, a spokesman for McCullough, the prosecutor.

November 18, 2014: Missouri Governor Jay Nixon declares a state of emergency due to the violence and demonstrations after Brown's death. Many had been anticipating a decision by the grand jury.

November 24, 2014: McCulloch announces that the grand jury decided not to press charges against Wilson after deliberating for almost three months. Protests ensue. Many turned to social media to express their concerns, creating the hashtag #BlackLivesMatter.

March 4, 2015: US Attorney General Eric Holder announces results of a detailed investigation into Ferguson's government. The 87-page report finds the city's police department and municipal courts blatantly discriminated. Holder says: "The evidence of racial bias comes not only from statistics, but also from remarks made by police, city and court officials. A thorough examination of the records — including a large volume of work emails — shows a number of public servants expressing racist comments or gender discrimination; demonstrating grotesque views and images of African Americans in which they were seen as the 'other,' called 'transient' by public officials, and characterized as lacking personal responsibility."

March 12, 2015: The city's police chief, Tom Jackson, announces that he also would be stepping down. Demonstrations formed in front of the Ferguson Police Department that night. Two officers were hit by gunfire.