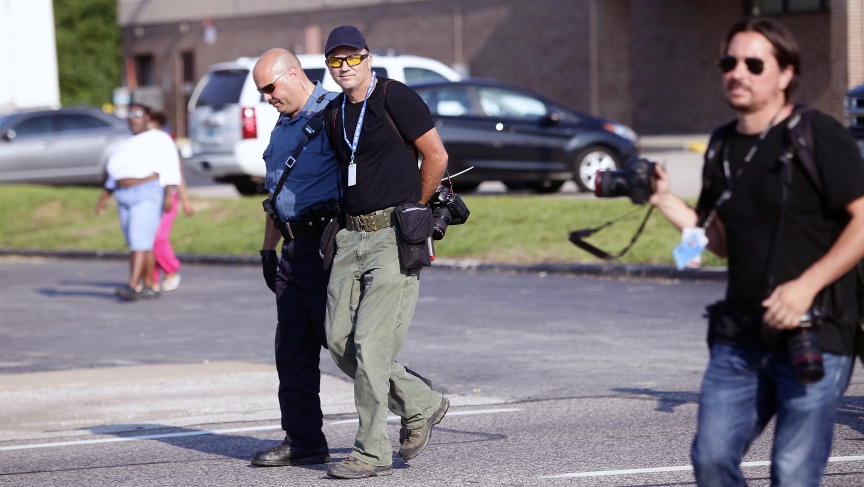 Scott Olson of Getty Images was one of several journalists arrested by police in Ferguson, Missouri in recent days. He was detained on Monday.
Credit:

German journalist Ansgar Graw says things were calm in Ferguson, Missouri, on Monday when he and Frank Hermann, another German reporter, lingered to take some pictures of a burned-out gas station on Florissant Avenue. Then they got arrested.

“It was a totally peaceful situation. There was no unrest, no threats, nothing. Only very few people,” says Graw, who reports for the Berlin-based newspaper Die Welt. But a younger police officer told the journalists to keep moving. “The moment you stay standing, you'll be arrested," Graw says the officer warned them.

Sure enough the reporters were arrested and handcuffed. Graw tried to get some information from the officers. “I asked an older police officer to give me his name, because he was in charge,” Graw says. “He only answered, 'My name is Donald Duck.'”

Graw came to suburban St. Louis to report on the racial tension and protests that have erupted in the wake of the shooting death of MIchael Brown by a Ferguson police officer, more than a week ago. The protests that followed led to a serious police response, that has also become a story in its own right.

Graw says he and Hermann were brought to a facility in St. Louis where their mug shots were taken and they were held for about three hours. After the two were released, Graw wrote in an article for Die Welt that it had been a new experience for him as a journalist.

"I've been in several conflict zones: I was in the civil war regions in Georgia, the Gaza strip, illegally visited the Kaliningrad region when travel to the Soviet Union was still strictly prohibited for westerners, I've been in Iraq, Vietnam and in China, I've met Cuba dissidents. But to be arrested and yelled at and be rudely treated by police? For that I had to travel to Ferguson and St. Louis in the United States of America."

Graw concedes that the arrest could have happened in any number of places around the world. He also doesn't doubt that he probably would have faced a much more unpleasant ordeal if he'd been detained by police in some of the trouble spots he's reported from over the years.

Still, the veteran conflict reporter says he was only one of a number of journalists arrested in Ferguson. “It [has] happened over the last few days much too often,” he says. At least 11 reporters have been arrested and detained since the protests began.

Graw points out that his native Germany has not witnessed the kind of unrest — fueled by racial tension — that he has seen in Ferguson. But that doesn't mean it could never happen. He points out there are minority neighborhoods in German cities with large populations of immigrants from the Middle East.

“From time to time, it seems that [these communities] are not really governed by our German police forces, but by clan structures of the people living there,” Graw says. “I wouldn't point fingers at the United States and say, 'Oh, look what a mess you have here in Ferguson.'”

“We have seen pictures like Ferguson in former times in France, we have seen them in the United Kingdom, and it could also happen one day in Germany.”