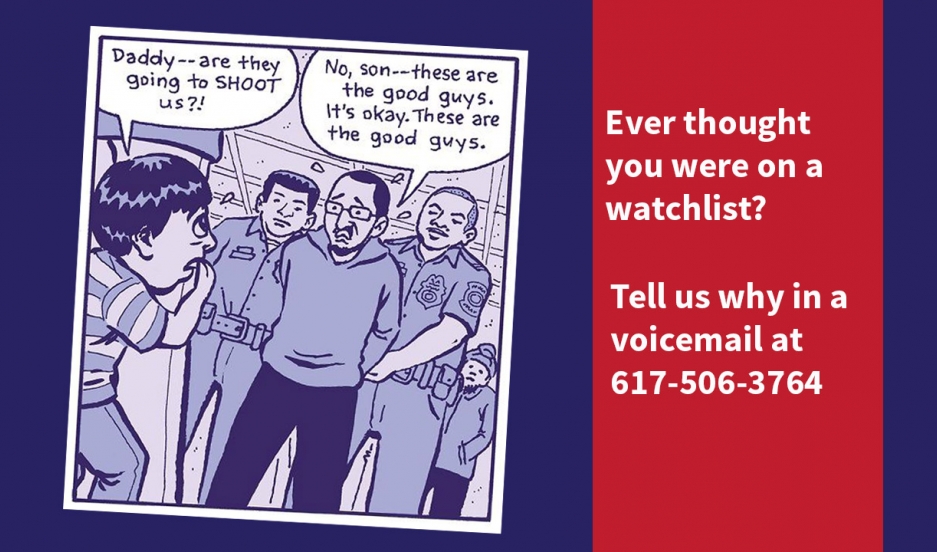 This panel is from Josh Neufeld's comic "Crossing the Line."

Fauzia Din, a US citizen from Afghanistan, says her husband is being refused entry to the US because of suspicions that he is involved in "terrorist activities." Stories like this seem to be increasingly common, though they rarely make it into the public eye.

We want to change that.

Fauzia's husband has never been allowed to enter the country, but we would like to know if you — as a US citizen or non-citizen — have ever been escorted to a room and questioned at an airport or border crossing, or faced difficulties returning to your home in the US? Or have you ever thought you were on a watchlist for any other reason?

At The World, we value the power of the human voice. So to better understand the impact that watchlists have on Americans, we are asking listeners to share their own experiences with us by leaving a voicemail at 617-506-3764. Please leave your name and contact information so we can reach you. Your contact information will not be shared.

Here is an example from one listener, Shoshana Hebshi-Holt, who shared her story with us over the weekend. In a one-minute voicemail, Shoshana describes being taken off a plane in 2011 on suspicions of being a terrorist. The 39-year-old mother of twins says she was then handcuffed, strip-searched, and questioned for hours.

The Department of Homeland Security is known for being overly inclusive with its terrorist watch list. Nelson Mandela was infamously included as late as 2008 and Fox News pundit Stephen Hayes created a stir when he discovered his name on the list last year. Yet, hundreds of thousands more people are routinely added each year — often with little or no evidence. While very little information regarding the watch list is made publicly available, more than 1.5 million names were added to it in the last five years; and about 99 percent of the names submitted to the list were accepted.

It isn't always immediately clear why one US citizen or visa-holding person is detained and another is not, and one of the most frustrating parts of being on black lists is that you don't always know if you are. What is clear, however, is that such lists impact the lives of Americans in big and small ways. We would like to know if you ever felt like an outsider when trying to return to your home in the US? If so, we want to hear your story.

This call for stories is inspired by an account aired by On the Media in 2013. One of their producers, Sarah Abdurrahman, was detained, along with her family and friends, by US agents at the Canada-US border. After her story aired, Josh Neufeld made a comic of the producer's experience (a panel of this comic is published here, but you can see the whole thing on The Nib).