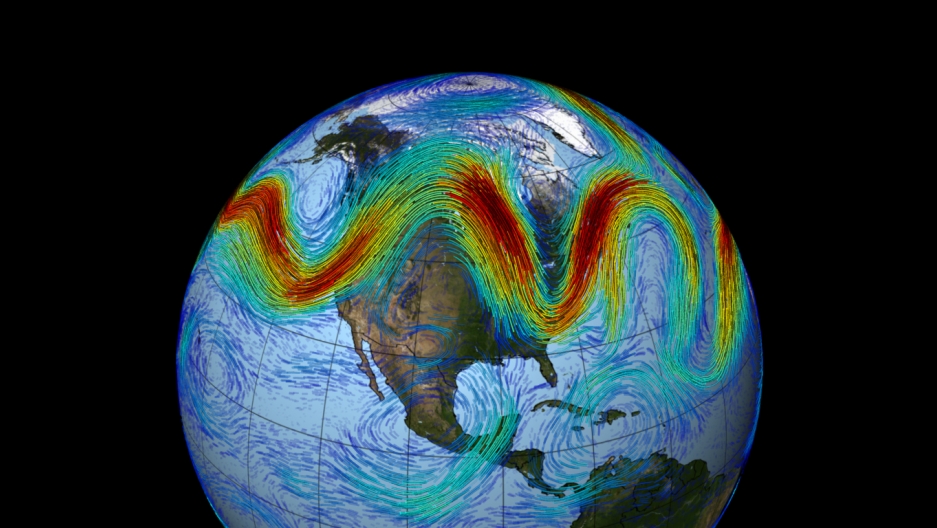 A strange thing happened here in Boston over the weekend: The temperature got above freezing.

The massive dumps of snow here this winter have been bad enough, but it's the cold that's really done us in, an unbroken stretch of frigid weather that’s made Massachusetts feel more like Montreal — or Anchorage.

And Rutgers University climate scientist Jennifer Francis has a counterintuitive explanation for all the cold: It's the warming Arctic.

More specifically, Francis thinks the warming Arctic is causing the jet stream to slow down and get a lot more loopy, which lets big masses of frigid air slip south.

The jet stream is that powerful, high-altitude circulation system that carries weather around the Northern Hemisphere. The main fuel behind it is the difference in temperature between the Arctic and the warmer regions to the south. 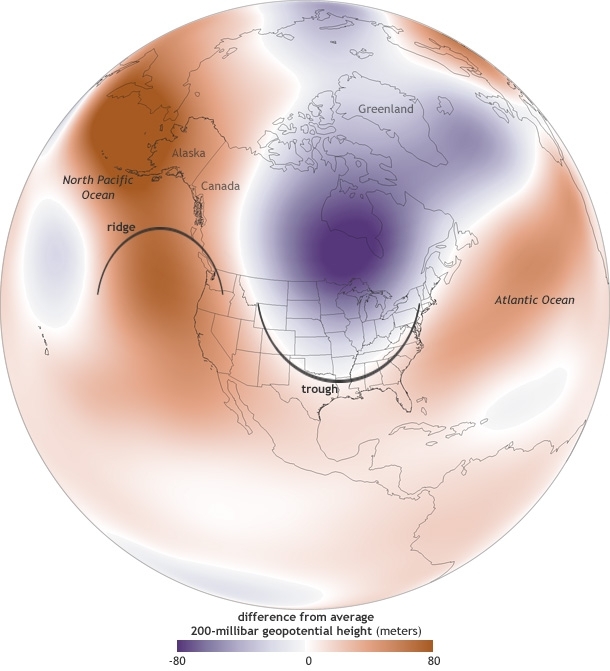 The polar jet stream has repeatedly followed a path of steep ridges and toughs over North America, as illustrated here for the period of November 2013-July 2014. Map by NOAA Climate.gov, based on NCEP reanalysis data from NOAA ESRL.

“When the Arctic is warming so fast, that means there's less fuel driving the jet stream,” Francis says. “When the jet stream has less fuel it flows more slowly, and it tends to take these big north-south dips.”

The northeastern US just happens to be in the path of one of those big dips this year, she says, “and that’s when we get our cold winters."

But she also thinks there’s a lot more going on than just a lot of cold and snow in New England. “You have to step back and look at what the jet stream is doing all around the northern hemisphere,” Francis says.

She says it's also taken a huge northward swing over the western US, causing drought and heat waves in California, while farther east the United Kingdom has seen extremely strong and persistent storms the past two winters.

“Think back to the Olympics last winter, and how much trouble they were having keeping snow on the ski slopes,” Francis says. "And you can go all the way around to Alaska, [where] they've been having two very warm winters in a row.”

The research of Francis and others exploring this territory is controversial even among mainstream climate scientists. And Francis herself cautions that the climate system is extremely complicated, and that a lot of other big changes are in play at the same time as the disrupted jet stream. “We can't draw a straight line between what's happening in the Arctic and what's happening to us in the east” and elsewhere around the world, she says. But, she adds, “what we do think is happening is the Arctic warming so fast is making it more likely that these kinds of patterns will happen more often.”

That may give Bostonians pause. Everyone here is talking about how nasty the winter has been, but the mostly-unspoken assumption is that since it’s almost never happened before, it probably won’t happen again in our lifetimes.

But Francis says that’s “not a safe assumption at all” given the recent changes in the jet stream. She also points out that the Atlantic Ocean off the east coast has been warming, creating more evaporation. “[That] puts more moisture in the air, [and] that moisture is also fuel for storms," she says.

Or, she suggests, things could go the other way: a shift in those big dips could push the cold part of the loop elsewhere and bring more Northeast winters like 2012 when, among other things, there were already crocuses and mosquitoes in Boston by early March.

So get ready — and keep your long underwear and your shorts handy.

This story has been updated to reflect contrasting theories on this particular climate debate.