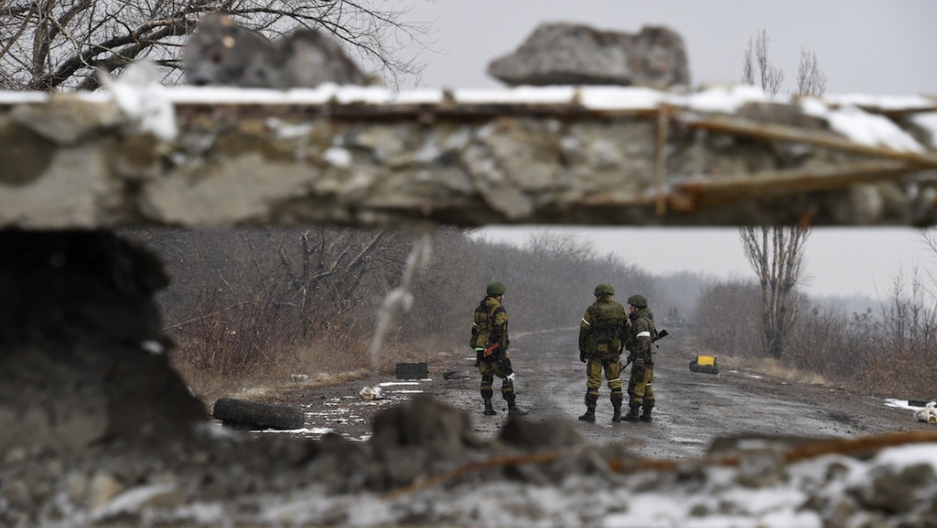 It's a decidedly busy week for world leaders striving to find a resolution to the war in eastern Ukraine between pro-Russian separatists and Ukrainian forces.

The recent surge in fighting is rapidly claiming lives, decimating homes and devastating towns, and as GlobalPost correspondent in Kyiv Dan Peleschuk noted last week, "there's no denying Ukraine's 9-month-old war is only getting worse."

Earlier Tuesday, Ukraine's military headquarters came under fire in the city of Kramatorsk, while the railway hub of Debaltseve remained a hotspot of conflict.

"The main headquarters of our anti-terrorist operation took a strike from a Tornado rocket," Ukrainian President Petro Poroshenko said. "The headquarters took this strike, but a second strike was carried out on residential areas of Kramatorsk."

At least 15 people were killed in the attack, Radio Free Europe reported. Overall, the war in the east has claimed more than 5,300 lives and displaced more than 1 million, according to the United Nations.

Leaders from Ukraine, Russia, France and Germany are set to convene for peace talks in Minsk, Belarus Wednesday.

Good rundown of who wants what (publicly at least) in Minsk. http://t.co/vznarVbFXB

Perhaps the most controversial of the issues on the discussion table is the question of whether the West should give defensive arms to Ukraine. In a report released this month, eight former US officials outlined the reasons why they believe it’s crucial to do so.

At a news conference following his meeting with German Chancellor Angela Merkel in Washington, DC, on Monday, US President Barack Obama said he hadn't made up his mind.

"It is true that if, in fact, diplomacy fails, what I've asked my team to do is to look at all options," Obama said. "But I have not made a decision about that yet."

If Obama were to decide to send weaponry to Ukraine, it could cause a rift with European countries aligned with the US in trying to halt the violence in Ukraine. It could also further provoke Russia.

"The issue of whether to provide more than nonlethal military aid to Ukraine's army has threatened to cleave what has until now been a united front among the United States and some of its major European allies over how to respond to the Ukrainian conflict, which has been stoked by a steady supply of weapons and soldiers from Russia," The New York Times' Michael D. Shear and Andrew Higgins point out.

Sanctions on Russia have been the modus operandi of the West in trying to curb the conflict. The first round of Western sanctions, which included visa bans and asset freezes, took effect last March when Crimea voted to secede from Ukraine.

More from GlobalPost: Take that, Putin: US and EU enact sanctions against Russia

Although several rounds of sanctions have gone into effect since then, weakening Russia’s economy, European Union foreign ministers decided to hold off on enacting new sanctions until Feb. 16 to see if a potential ceasefire would take hold in the coming days.

"The principle of these sanctions remains but the implementation will depend on results on the ground," French Foreign Minister Laurent Fabius said.

The United States, Germany and other Western allies have been aiming to de-escalate the conflict through diplomatic means since it began nine months ago. Obama called Poroshenko and expressed "his strong support for the current peace negotiations," the White House said Tuesday.

Merkel, in particular, has been staunchly advocating for a peaceful solution. Together with French President Francois Hollande, she proposed a peace initiative to Russian President Vladimir Putin in Moscow last week.

Her comments following the talks sounded less than hopeful that the Franco-German plan would work.

"After the talks yesterday in Moscow that the French president and I had, it is uncertain if it will succeed," Merkel said on Saturday.

More from GlobalPost: Violence in eastern Ukraine seems endless now — here's how we got there