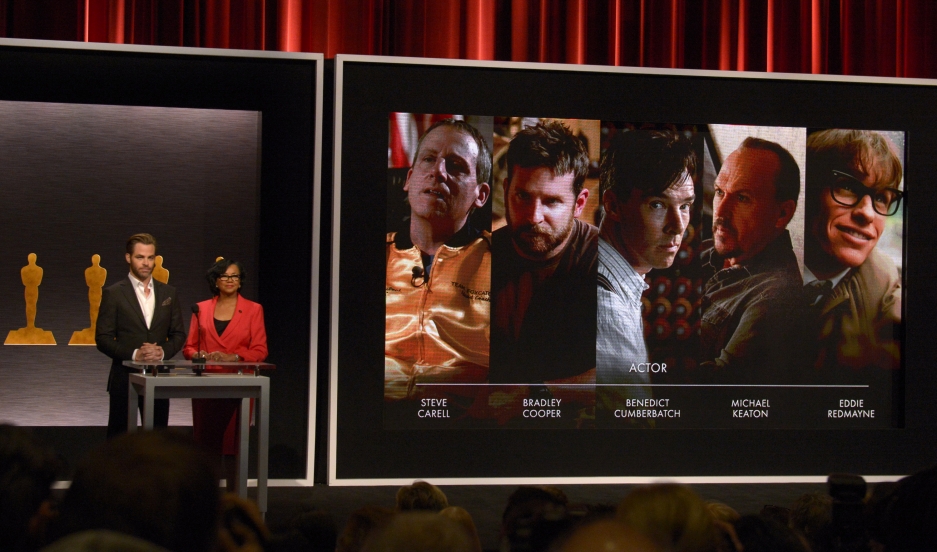 Actor Chris Pine (L) and Academy of Motion Picture Arts and Sciences President Cheryl Boone Isaacs (R) announce the nominees for Actor in a Leading Role during the nominations announcement for the 87th Academy Awards.

This year's Oscar nominations have taken a global turn, from Edward Snowden's cat-and-mouse hopscotch with the NSA to a central African tragedy and America's last days in Vietnam.

In a year where the Academy is coming under fire (more on that later), here's a quick guide to its focus abroad.

Three out of the five nominated films in this category take place outside the United States — but they all address issues that have affected Americans in the past ('Last Days in Vietnam'), present ('Virunga') and future ('Citizenfour'). Laura Poitras' 'Citizenfour' is perhaps the most high-profile film of the bunch, following Edward Snowden as he orchestrates and follows through with the biggest — and most dramatic — leak of government secrets in United States history. Poitras, who appeared on our show in October, described how the burden of responsibility weighed on Snowden. "You see the toll that the last year had taken on him," she told Marco. 'Citizenfour' follows the then-29 year old as he sets in motion actions that would catapult him onto the world stage and elevate mass surveillance and digital security as primary and immediate public concerns.

2. Only three nominees for best director are American

3. Four of the eight Best Picture nominees were shot outside of the US

'The Imitation Game' was shot in England, with locations including Alan Turing's former school, Sherborne and the actual Bletchley Park. 'The Theory of Everything' was shot in Cambridge and around the United Kingdom. Parts of 'American Sniper' were shot in Morocco. And 'The Grand Budapest Hotel' was filmed entirely in Germany. The atrium lobby of the hotel in the film is actually the defunct Gorlitzer Warenhaus department store in Gorlitz.

While 'Leviathan' won the Golden Globe, the Polish-Danish drama 'Ida' has captured many critics hearts with its portrayal of a young nun in 1960s Polish People's Republic. Estonia and Mauritania earned their first-ever Oscar nominations with 'Tangerines' and 'Timbuktu,' respectively.

5. This year's Oscars might be globally diverse, but they are certainly not racially diverse

People stormed to Twitter Thursday after hearing that not one person of color was nominated for an acting category. 'Selma' actor David Oyelowo and director Ava DuVernay were expected to earn nominations but were snubbed.

#OscarsSoWhite that the ceremony is being held in an REI this year.

6. French film composer Alexandre Desplat is having a good day