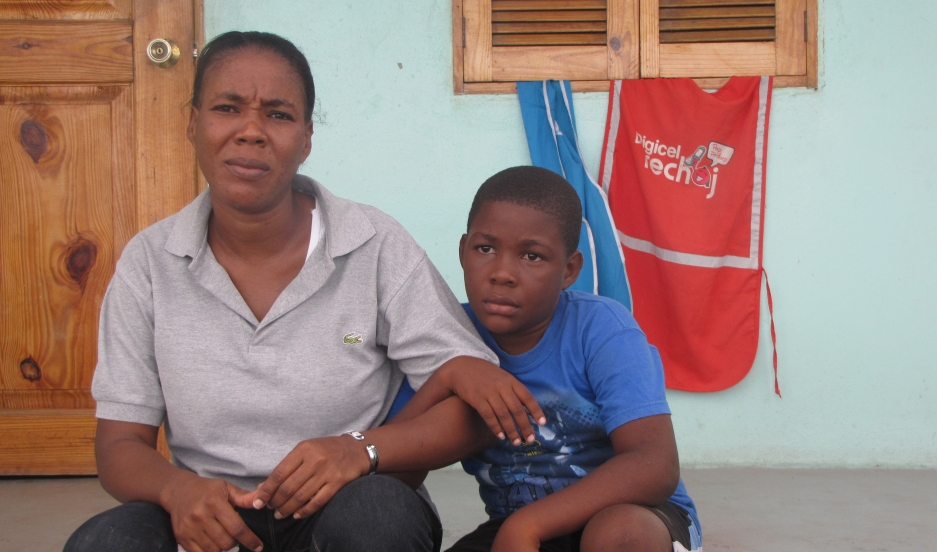 Marie Conce Moreau with her son outside their home in Village la Difference. Moreau took a job at the nearby industrial park when her husband lost his job. They also make ends meet by donning blue and red aprons to sell phone cards.

After Haiti’s disastrous earthquake in 2010, foreign aid poured into the country. Much of it went to long-term efforts to get people employed and housed. But results have been disappointing.

The US Agency for International Development, for example, initially pledged to construct 15,000 permanent houses; only 906 have been built. Most of them are in one remote development in Haiti’s north called Village la Difference. It’s a $33 million project that was supposed to serve people displaced by the earthquake, but it took so long to build — opening more than three years after the disaster — that much of the target population had already relocated.

The residents are a mix of earthquake victims and people barely affected by the disaster. They came here to live in better homes with amenities rarely available in Haiti — like running water and reliable power — and access to jobs to pay for such luxuries.

Women are at the center of an effort make this place a long-term success. Residents know the risk of shiny developments like this falling into disrepair and becoming bad places to live. 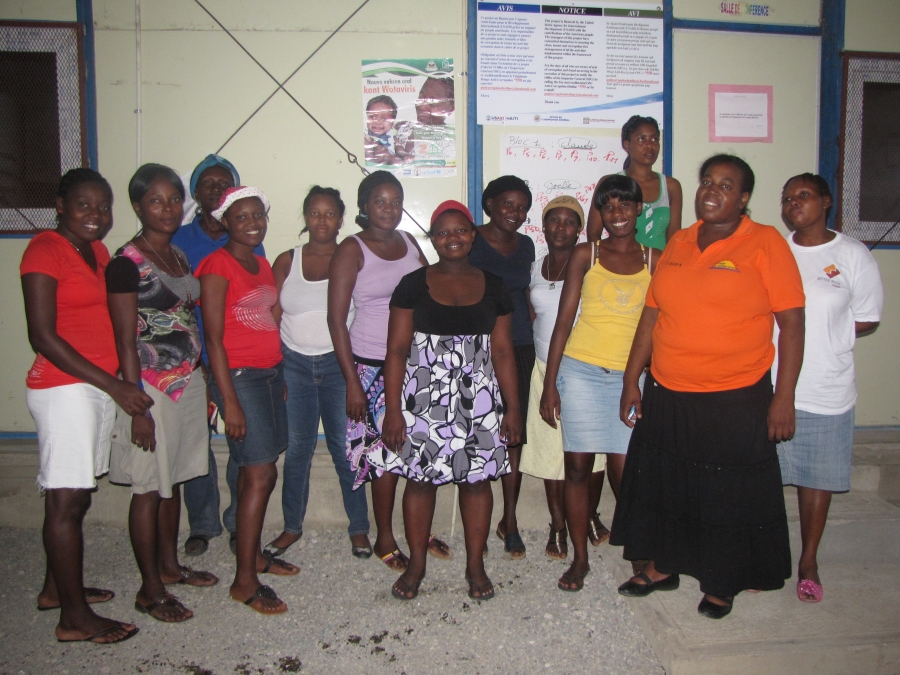 Members of the Association of Women of Potential of Village la Difference after their weekly meeting outside the Global Communities conference room.

So the women formed associations that meet at sunset once a week, starting each session with singing: “Women are reeds,” go the Creole lyrics to one song. “You can behead us, you can uproot us, but when the rain falls, we will bloom.” Ritual is such a big part of this group that it feels a bit like a sorority or an athletic team.

The president of this group is Lucilia Petit-Frère, a schoolteacher with a commanding presence. This evening, she introduces what she calls an important topic: designing the group badge. “Don’t forget, the badge helps us identify one another and invite each other to things," she says.

Myrianne Joseph, who comes from a nearby city, helped set up this group and four others in the village for Global Communities, an NGO that’s managing the housing development for now. She says life in the village is a new kind of culture for many Haitians.

It helps that roughly 250 residents work in the new industrial park down the road, making $5 a day. That’s about twice the average wage in Haiti, but not exactly a dream job. 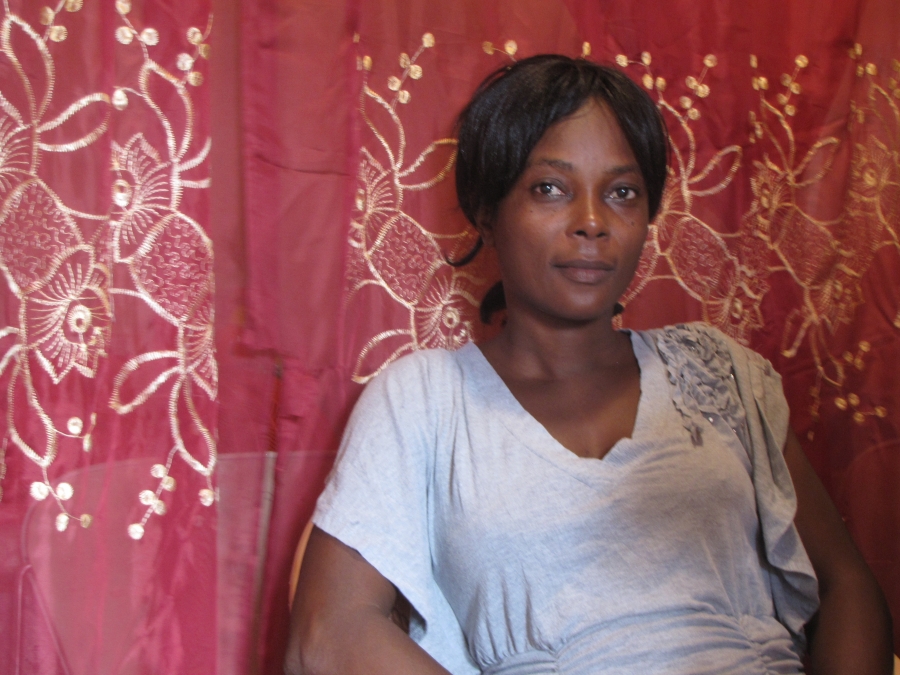 Lucilia Gérome Petit-Frère, President of the Association of Women of Potential of Village la Difference, sits in her living room in the village.

Louisa Jean-Charles spends her days folding and labeling clothes at SAE-A, the Korean garment factory that anchors the industrial park. “It’s not bad work,” she says, but adds, “you do have to stand all day, and your back aches and your feet hurt. But you have to do it anyway because that’s the work we have in this country. There’s nothing else.”

Other women in the village are desperately unemployed. The federation is trying to organize a workshop to teach them skills that will help them get hired in the garment factory. But residents also want other options. Marie Conce Moreau, a student, did a stint in the factory and hopes not to go back.

“Everyone who is working in the industrial park is there because they don’t have their own trade,” she says. “I would like to see a system put in place in the village to prevent people like me from having to work in the park.”

Moreau is studying to be a social worker, and wants to serve people with HIV. But she also hopes to see other women with less education empowered to make a living outside the park. Global Communities would like to open a marketplace here, a potential stopping point for travelers. The women want training on how to produce items for the market — like fruit juice, jam, peanut butter and soap. 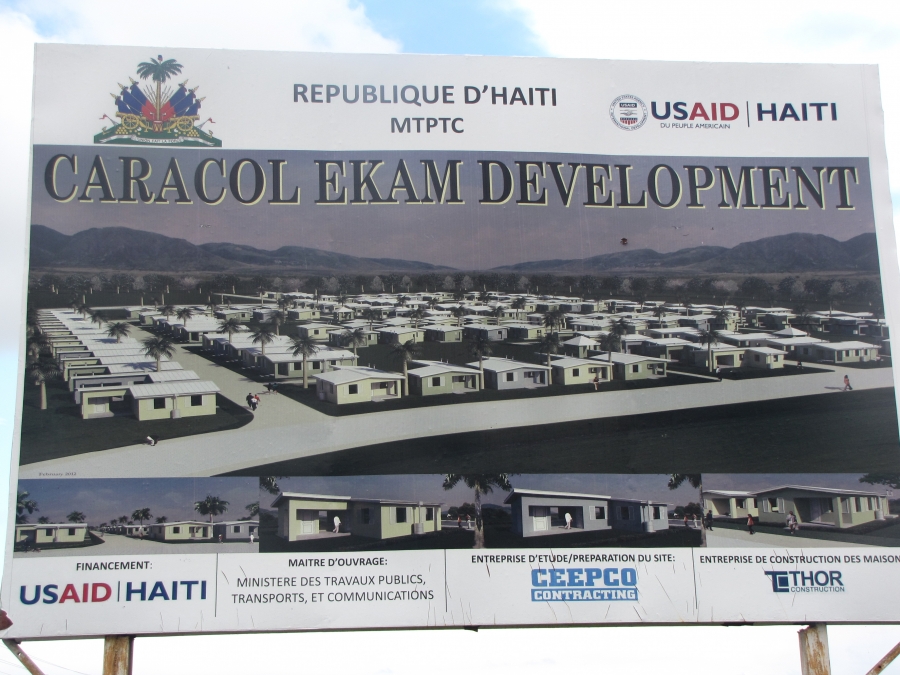 The sign outside Village la Difference, a USAID-funded housing project in Caracol, Haiti.

And beyond practical skills, the women are challenging gender dynamics in Haiti. Many men in the village work as laborers or merchants, and both genders hustle to make ends meet. But for too long, Myrianne Joseph says, Haitian women have been expected to stay at home even when doing so keeps the family poor.

“The tradition was that women can’t work ... that women stay at home and take care of kids and cook for men,” she says. “That is changing. They want it to change. It must change.”

Still, there’s no guarantee that their dreamt-of market will happen, or that the village will be a rare post-earthquake Haitian success story. But their songs resonate with determination. One factory worker, Louisa Jean-Charles, makes the point by singing one of the group’s anthems.