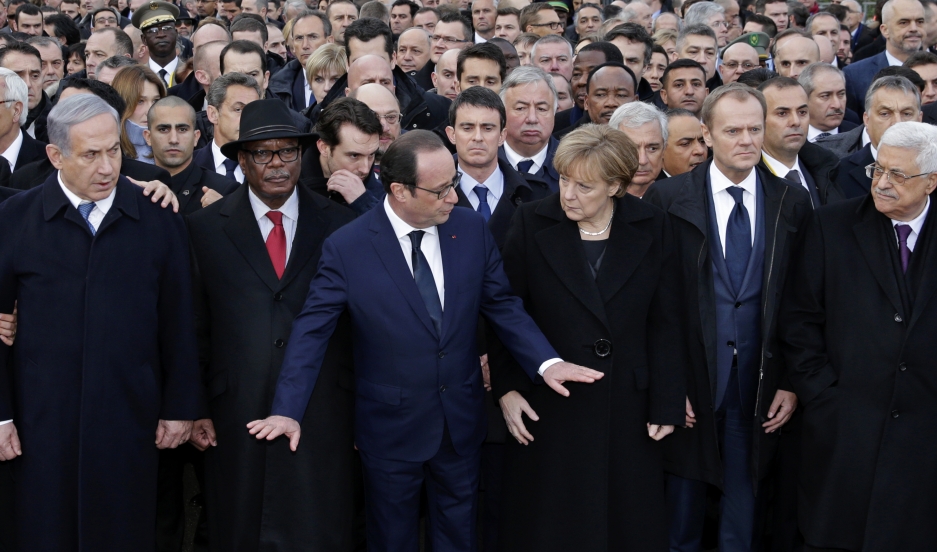 The leaders of Israel, Mali, France and Germany at the peace rally in Paris

That’s essentially how the White House is explaining why the highest US official marching alongside grieving French (and an assemblage of world leaders) was the US ambassador to Paris, Jane Hartley. They didn’t feel they had the protection in place to let President Barack Obama march around Paris.

Barely mentioned by the news media was the black man at the front of the line of those who massed against extremism, to support freedom of expression and to assert the human bonds between people of all different faiths and ethnicities. Ibrahim Boubacar Keita, Mali’s president, has lived through and navigated extremist violence for the past three years in his country. Not a shooting here or a bombing there, but relentless attacks. There’s that connection, plus the fact that France played a crucial role in, if not ridding Mali of its Islamist bacteria, at least driving extremists away from major population areas for the time being. The fact that the kosher supermarket gunman Amedy Coulibaly has Malian parents didn’t escape anyone who wondered why he was there.

The Middle East also joined in the march. We learned today that perhaps Francois Hollande had tried to discourage Israeli Prime Minister Benjamin Netanyahu from attending the march, feeling that tilting the spotlight toward Middle East problems would divert attention away from French and European concerns. Shin Bet, the Israeli security service, also was uneasy with the complex protocol they would need to adequately protect their man in Paris. In the end, Bibi went anyway, under the pretext of attending a Jewish community event in Paris.

Hollande expressed his anger with soon-to-be-candidate Bibi for staging — as he put it — an early campaign rally on French soil.

The proximity between two men who hold so much control over next steps for Middle East peace was tantalizing. Just four other dignitaries stood between them on the front line of the demonstration.

Perhaps Hollande is right. Let’s not dip into the electrically charged waters of Middle East politics so quickly after this tragedy.

But they are related. At the very least, millions of Muslims and Jews are disappointed in the stagnation of peace talks — some are so fed up they just say, “enough, just split it down the middle and stop the fighting.”

I want my leaders to do leader-like things. So, imagine what would have happened if Obama had gone to Paris, aside from just creating always-welcomed trans-Atlantic goodwill. Imagine that Obama is one of those four dignitaries standing between Netanyahu and Abbas. And just think if, at the end of Sunday’s demonstration, as the front of the line marched into the Place de la Nation, Obama would have been able to take Bibi and Abbas aside, and in front of a manic media scrum that would zoom in on the moment, he’d put their hands in his and say, “Tomorrow we build on this moment, where we are in solidarity in knowing that we are all the same, and we want the same thing: Peace. We’ve seen what the stakes are. We destroy ourselves. Or we save ourselves. Tomorrow we get to work solving the crisis in the Middle East. You guys down?”

But that didn’t happen. Because no one from the White House went. The moment, even if it seems unrealistic, could not have happened because, as Richard Haass tweeted today: “POTUS violated the Woody Allen rule of diplomacy, namely that 80 percent of life is showing up.”

Just seeing this through the eyes of a taxpayer, I want my dollars to buy the best and the brightest world-class diplomacy available. Kerry’s “I couldn’t break a commitment in India” seems to suggest he doesn’t know how to prioritize world affairs, and isn’t thinking more grandly.

We’ll soon be figuring out the kind of bad deal our tax dollars are buying us as far as real security goes, and why the Kouachi brothers were human time bombs waiting to go off.

Practical security was at the heart of the decision in whether to send Obama or Biden to Paris, White House spokesman Josh Earnest said. “The security requirements behind a presidential visit and even a vice-presidential visit are onerous and significant,” Earnest explained today, admitting at the same time that the White House blew it diplomatically by not going.

Perhaps it’s not fair to second-guess presidential security on something like this. Especially when you consider what we know about threats against Obama: He’s way more of a target, according to the Secret Service, than his predecessors. (Again, we’ve heard charges that the Secret Service is underfunded, even though an actual shooter making it into the White House is never supposed to happen — under any budget.)

But those other leaders got up there, including Bibi, and they showed how they feel. If it is about fear, maybe some in France are angry, upset, gloating or perhaps thinking what I am thinking: The US no longer has the moral ground to ever again use the phrase “cheese-eating surrender monkeys.” They might also sniff, “and as for the cheese that you Americans might pair with a surrender, bof, it will probably be French.”