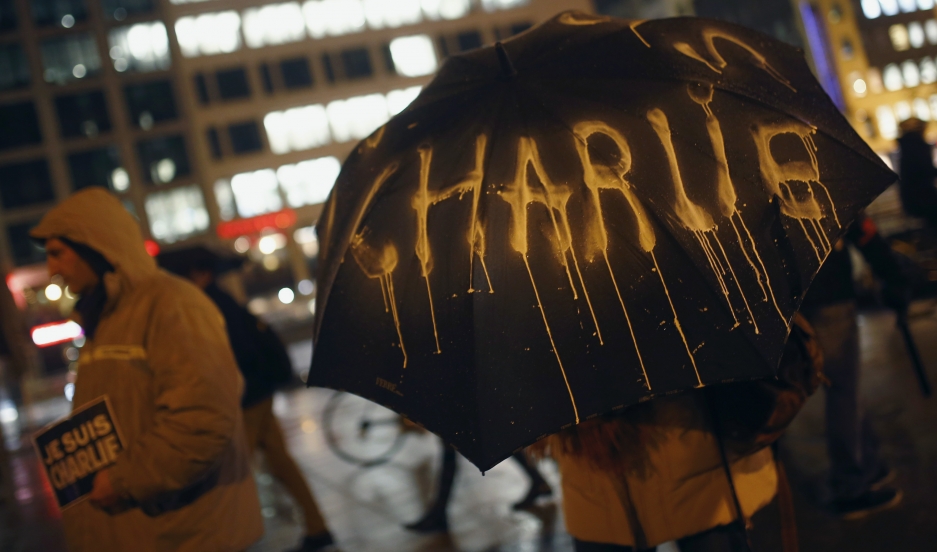 The “I am Charlie” slogan was on display during a vigil in Frankfurt, Germany following the deadly shooting attack in Paris this week.

Stephane Charbonnier, or “Charb” as he was famously known across France, knew he was a marked man. The 47-year-old editor-in-chief of the satirical magazine Charlie Hebdo, killed along with 11 others on Wednesday, was threatened by name in a 2013 issue of “Inspire,” the online publication of al-Qaeda’s affiliate in Yemen.

The wanted poster has the feel of a movie advertisement. It reads, “Yes we can: A bullet a day keeps the infidel away.” The names of 11 people are listed as, “Wanted: dead or alive for crimes against Islam.”

A witness to the scene after the shooting at the magazine’s office said Charbonnier died twisted in his chair. “I think he must have got up to insult them, or to make an obscene gesture at them or to take away their weapons,” Patrick Pelloux told the AFP news agency. “I know he would have done that to them.”

It is not yet clear why the victims were targeted. But radical extremists including ISIS and al-Qaeda in the Islamic Maghreb have praised the killers for avenging the Prophet Mohammed.

Another man’s name that appears on the same wanted poster is that of Kurt Westergaard — te Danish cartoonist with the newspaper Jyllands-Posten who drew a comic of the prophet shown with a bomb in his turban 10 years ago. He received death threats, has been attacked with an axe and has lived under police protection ever since.

“I just did my job as a cartoonist on a newspaper. I worked according to the Danish traditions for satire, I haven’t done anything wrong,” he said. “Nevertheless, I have got to be, in a way, on the run in my own country.”

Salman Rushdie’s name and face are also on the 2013 wanted poster, but this was old news in his case. The author was marked for death by Iran’s Ayatollah Khomeni way back in 1989 after his book, “The Satanic Verses” was published. In a 2012 interview with PRI’s Studio 360, Rushdie described the religious fatwa calling for his murder as an early instance of an “outrage industry,” in which religious leaders stoke the anger of the faithful.

“I’ve always thought that you can draw a straight line from the attack on Satanic Verses to the 9-11 attacks. One is a prologue and the other is a main event,” Rushdie said.

“There’s been a fast and steady attack stream,” Ranstorp said. As a result, several cartoonists, writers and others who’ve been named as enemies of Islam are living under constant police protection.

“They are trying also to sew polarization within the society, which makes it easier for them to recruit,” Ranstorp added. Carrying out terrorist acts, or even simply threatening violence, plays into the propaganda of radical Islamists that depicts western and Muslim culture as eternally at odds. It can provoke an anti-Muslim backlash as well.

The collective French community of Muslims has condemned the Paris attack. Nonetheless, Ranstorp said it’s likely that right-wing forces will capitalize on the event to make the point that Islam is the enemy.

There is a minority of fanatical Muslims who support the killing of those who have insulted their religion, said Mustafa Akyol. He' a Turkish journalist and author of, “Islam Without Extremes: A Muslim Case for Liberty.” But the Quran does not contain anything that condones such action.

“There’s only one verse that really addresses the issue and it says, ‘When you hear God’s revelations mocked at, do not sit with those people until they enter into some other discourse.’ That is the only thing it says,” Akyol explained. Rather than a call to murder, it is more like a call to boycott, he added.

The belief that mocking Islam should be punishable by death, Akyol said, comes from commentaries written by Muslim thinkers in medieval times.

As for the people on al-Qaeda’s wanted list, Akyol said there is a possibility of getting off the list. But that would likely require a public apology and, “that would be the death of free speech. I certainly do not want to encourage that,” he said.

Many Muslims would take offense at some of the cartoons published by Charlie Hebdo, and that includes Akyol. Still, he said, “I certainly stand by [the French journalists] when they are attacked barbarically by these extremists.”