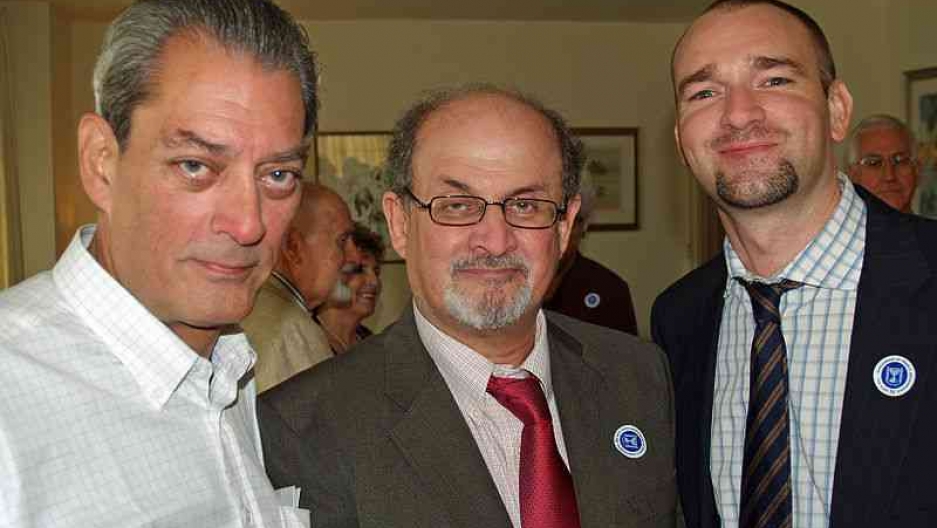 Salman Rushdie, center, has published a new memoir that looks back on his time as the subject of a fatwa, or religious death sentence. (Photo by David Shankbone via Wikimedia Commons.)

He’s written stories about how nations come into being; how new ideas come into the world and how the modern world connects to the ancient. Midnight’s Children, his second novel, won the Booker Prize in 1981, when Rushdie was in his early 30s.

But not many Americans had heard of Rushdie until Valentine's Day in 1989, when the dying Ayatollah Khomeni of Iran issued the infamous fatwa calling for Rushdie’s head, for the supposedly blasphemous novel The Satanic Verses. Rushdie spent most of the next decade in hiding, accompanied by armed British agents.

He’s now published his account of that stranger-than-fiction time under the title Joseph Anton: A Memoir.

Rushdie rejected the idea of fictionalizing his life, sticking to a factual memoir, but using novelistic devices. For example. he refers to himself in the third person.

“What’s interesting to me, not just as a person but as a writer, is the way in which this small group of people — a writer, his friends, his family, his publishers ... how they faced up to this extraordinary international attack,” he said. “What would this be like if it happened to your family?”

When pressed by his security detail to come up with an alias, Rushdie chose the name Joseph Anton, a combination of from Joseph Conrad and Anton Chekhov. Giving up his name and its ethnicity, he felt himself becoming something of a fictional character in an international drama.

“I wanted to show in that novelistic way that this isn’t about somebody who’s either demonic or ideal,” Rushdie said. “He’s just a human being with all the faults and qualities of human beings trying to struggle through this thing.”

That struggle included a life under surveillance, the isolation of riding in bulletproof vehicles and watching helplessly as his publishers and translators were attacked.

He also endured the backlash from the British press and politicians. Publisher and New Yorker editor Bob Gottlieb told Rushdie, that, of course, if he'd known people would die from publishing his book, he of course wouldn't have written it.

Although the remark was probably meant to be supportive, it infuriated Rushdie.

“I felt almost like someone from the NRA saying, ‘books don’t kill people; people kill people,’” he said.

Joseph Anton comes out in the thick of worldwide protests against the YouTube video “Innocence of Muslims.” But Rushdie rejects any comparison with the deliberately provocative video and The Satanic Verses.

“I have nothing but contempt for (the filmmaker)," he said.

And he remains adamant that he would not change a word of his novel.

“In this age we live in, when violence can be whipped up almost overnight,” Rushdie said, "I can’t help but think that the people who whipped up the violence are the ones responsible for it."

He calls that violence part of “the outrage industry.

"People like religious leaders try to find things that they can use to arouse the anger of the faithful," he said. "I think that it’s now actually something that is very, very consciously being done.”

Midnight’s Children has just been adapted into a feature film by Deepa Mehta — Rushdie wrote the screenplay and voiced the narration. In the process of revisiting the 1980 novel, Rushdie found strange parallels to the ordeals he would face later in life.

In one scene, a young writer becomes a wanted man when he runs afoul of religious politics, and ends up taking refuge in his beloved’s basement.

"They feel a little bit like bookends, these two books which stand at opposite ends of my writing life.”