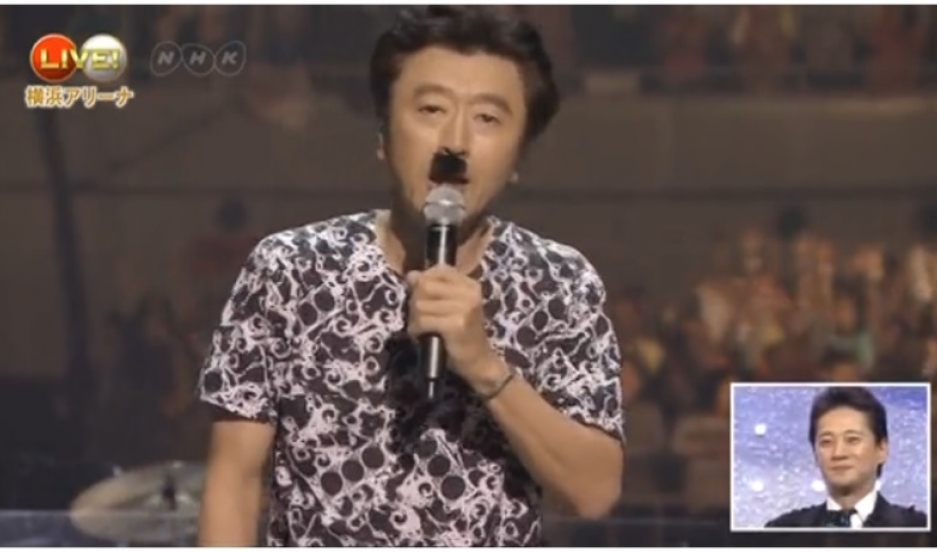 Keisuke Kuwata wears a fake Hitler mustache at the start of the 2014 Red and White Song Competition, a major New Year's Eve institution in Japan.

One of Japan's pop music megastars caused an uproar by wearing a fake Hitler mustache during an appearance on Japan's iconic New Year's Eve television show.

Keisuke Kuwata is the founder and lead-singer of the Southern All Stars, one of Japan's most beloved pop bands from the 1980s. After going on hiatus between 2008 and 2013, the group appeared via satellite on state broadcaster NHK's Red and White Song Competition. Known as the Kohaku, the program has been a New Year's Eve tradition for millions of Japanese since 1949.

The appearance by the Southern All Stars was supposed to be a special treat, but when Kuwata came out wearing the mustache at the start of the band's set, the performance quickly became one of the hottest topics on Japanese social media.

So why was Kuwata sporting the Hitler look? He hasn't said why, prompting lots of Internet speculation.

Many Japanese think the key to the mystery of the Hitler mustache (called a ちょび髭, or chobi hige, in Japanese) is the fact Kuwata was sporting it as the Southern All Stars kicked off their hit single “Peace and Hi-Lite.”

In remarks Kuwata made about the song, as reported by the Japan Times in August 2013, he said:

“I saw on the news that our neighbors were irritated. No matter how much dialogue we hold, it seems that the argument doesn’t change,” go the lyrics penned by the venerable band’s leader, Keisuke Kuwata."

"The song also expresses what could be interpreted as criticism of Prime Minister Shinzo Abe and his revisionist views of history, warning that “people tend to forget the tragic past and their foolish act"

The 2014 Kohaku broadcast came in the aftermath of a snap December election that saw the ruling bloc, including Prime Minister Shinzo Abe and his Liberal Democratic Party, re-elected with a 325-seat supermajority.

While the LDP itself actually lost several seats, there are fears that the ruling bloc's supermajority will allow Abe to change Japan's “peace constitution” — which denounces war and endorses pacifism — and even start a war.

It seems that the Southern All Stars were criticizing [Japanese Prime Minister] Abe. So, was that funny little moustache supposed to symbolize Hitler?

LDP lawmaker Masaru Onodera was unimpressed by the possibilty that Kuwata was equating Abe and Hitler:

One Twitter user posted a tongue-in-cheek interpretation of Kuwata's moustache:

I though Keisuke Kuwata's Hitler moustache was more of an homage to [popular comedian] Cha Kato's shtick. It has nothing to do with criticizing Abe. Although I simply cannot relate to any of the Southern All Stars’ political songs at all. And NHK: how could you broadcast someone impersonating Hitler???

This story by Nevin Thompson was originally published by our partner Global Voices Online, a community of bloggers from around the world.