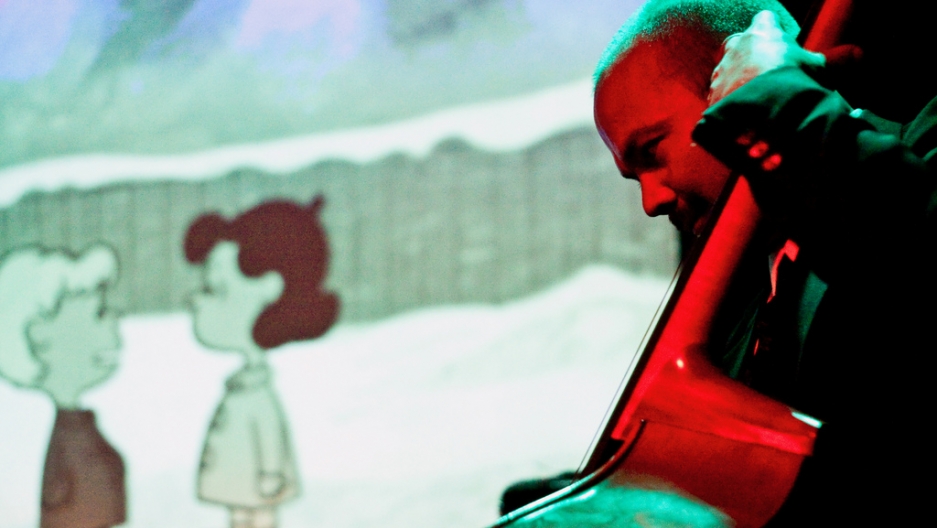 "A Charlie Brown Christmas" plays on screen behind a live band.

One of the best known jazz scores of all time was written for a children's cartoon by someone you've probably never heard of.

Lee Mendelson, a writer, producer and director of network television specials, was working on a documentary on Charles Schulz and the characters in his comic strip, "Peanuts," when he happened to hear a song while driving across the Golden Gate Bridge.

It was called "Cast Your Fate to the Wind," a modestly successful single by pianist and composer Vince Guaraldi. “Something in my mind said, ‘That's the kind of music that I'm looking for,’” Mendelson recalls, “It's adult-like, but also child-like. It seemed to fit our characters.”

Mendelson met Guaraldi for lunch, and the two hit it off. He asked Guaraldi to write the score for a Peanuts Christmas special that was planned for later that year.

“About a week later, Guaraldi called and said, ‘I gotta play something for you.’ Mendelson remembers. “I said, ‘Oh please, don't play it over the phone.’ He says, ‘I gotta play it for you before I forget it.’ The song was called ‘Linus and Lucy.’”

“It's probably, I would guess, the first time that jazz was ever put into a cartoon,” Mendelson says. “I could be wrong, but it was certainly the first time it had ever been done on an animated network special.” The recording became a social phenomenon, as did the Peanuts Christmas special. Half of the viewing audience in the United States watched it.

Jean Schulz, Charles Schulz’s widow, remembers hearing “Sparky” — Schulz’s nickname — say how "marvelous he thought Vince Guaraldi was, and how he had captured something about the lilting quality of the kids — the way they walk along and bounce a little bit — that he had captured that in his music.”

In addition to "Linus and Lucy," Guaraldi had written an instrumental piece that opened the show. “When we looked at the show about a month before it was to go on the air, I said, ‘That's such a pretty melody; maybe we should try and find some people to put some lyrics to it,’” Mendelson says.

He called people he knew in the business, but everyone was busy. “So I sat down with an envelope — I’ll never forget this — at our kitchen table and wrote 'Christmas Time Is Here' in about ten minutes," he says. "It was a poem that just came to me — never changed the words to this day. It was only about a minute long. And Vince got a bunch of little kids together to sing it.”

Jerry Granelli, the drummer on the Charlie Brown Christmas record, says the tune cemented Guaraldi's place in jazz lore: "It's amazing: Vince finally wrote a standard. ‘Christmas Time Is Here’ has been recorded as a standard, and Vince always wanted to write a standard. So he made it.”